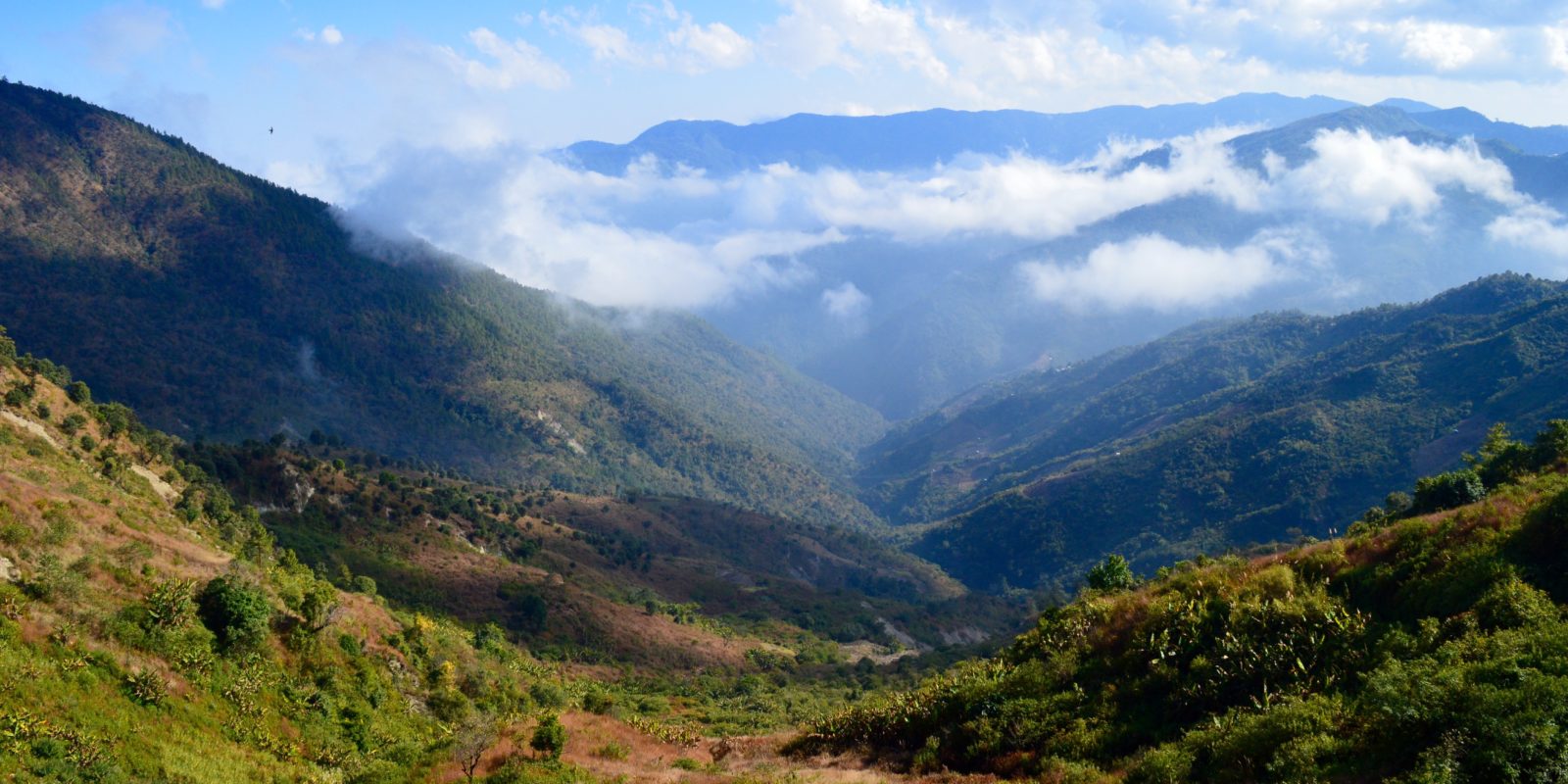 In the mountain towns of Chin all are wrapped up in coats and woollen hats. Buildings tilt over ragged cliff faces and frosty mornings are infused with the smell of wood fires, the local porridge, and the thick and grainy Chin coffee, best taken with a wedge of lime.

In Chin State, even the cats seem fiercer, ears torn and tails crooked as they eye each other up over a mislaid scrap of meat. The horned skulls of the prodigious wild ox – the mithun – are hung above most doors, as is that of the local basc deer, leading to a slightly Spartan ambience in Chin State.

The terrain is tough, the wind at times bitter, and the people have to work damnably hard to scrape out a living. Children are commonly put to work at the age of five, and when travelling through the countryside you will see plenty of plump-faced bairn with wary eyes and mucky clothes, not playing idly but carrying heaps of firewood back home or returning from work grinding corn.

Chin State, Myanmar’s poorest state, borders Bangladesh and India to the northwest of the country. Only recently open to foreigners, limited infrastructure and minimal marketing means that the number of foreign visitors to Chin is still few.

The heart shaped lake ‘Reh’ is one of the top things to see in Chin State, as is Mount Victoria, known as ‘Khaw-nu-thone’ in Chin language and in Burmese ‘Nat Ma Taung’, both meaning ‘Mother of Spirits.’

Over 3, 000 metres high, Mount Victoria, Myanmar’s most famous northern peak, is the highest mountain on the fissured Chin landscape. From the summit, with good weather you can see all the way to India. The climb up to the top is undemanding and will only take a few hours from the end of the highest-reaching road.

The best time to travel to Chin State is December when the weather is cool, clear blue skies are forecast, and the rhododendrons are in bloom.

Treks can be made around Mindat, a small town spreading along the length of an earthy road that snakes over the mountain range. The peaks of the mountains surrounding are as likely to be topped by red brick churches as gold-gilded stupas, though more often than not, they will be bare.

One has the impression that there is only limited time for religion in Chin State.

In addition to those hard at work, in the villages you may encounter troupes of children playing enthusiastically with homemade spinning tops, casting the toys ruthlessly at their opponents.

Gentle interaction is naturally encouraged, however be prepared to find the children far more shy here than in the rest of the country, due to the fact that foreign faces are still a rarity. Do not expect the enthusiastic salutations that visitors will receive when trekking around Hsipaw or Kalaw. Indeed, the Daai tribe are so modest, that on hearing the news that a traveller is approaching, adults and children alike will retreat into their houses until the alien presence has past.

This is not the case throughout Chin State though. The adults in most villages will greet you with curious smiles and occasionally bawdy banter, perhaps even inviting you to join them for a mithun horn filled with millet wine which they drink like water, but which foreigners are recommended to take only a few cautious sips of.

Before embarking upon the hike up Mount Victoria, one can stay in the trekking lodge ‘Aye Camp’, its name coming from the British army outpost that used to be there. The lodge is very basic but the food prepared is exceptional. On occasion a bonfire will be lit and players of traditional music will come up from the village along with local spectators to share a glass of the regional rum.

Alternatively one can stay in the cosy lodges that are peppered around the nearby town of Kanpetlet, a prettier but more subdued version of Mindat. From these lodges, the splendid views over the sloping pine forests appear more Bavarian than oriental.

The people of Chin, as in Myanmar in general, are made up of a variety of ethnicities that, although ancestrally related, now have individual dialects as well as cultural practices. What is referred to as the ‘Chin language’ is in actual fact an amalgamation of these dialects and acts as the lingua franca throughout the state.

Chin State has a population of only half a million – over 50% of who are Christian – made up of 43 distinct ethnic groups.

Both abroad and throughout the rest of Myanmar, Chin women are primarily known for the custom of tattooing their faces when they reach puberty. However it was only ever four of these ethnic groups that embarked upon this practice.

Most Chin people will tell you that this custom came about through the men attempting to uglify their wives and daughters so to make them undesirable to marauding foreign invaders. Others say that it ties in with the widespread animist belief of preparing oneself for passage into the next life, the tattoo serving the function of a key or password.

Men would be cremated and then buried under toadstool-like tombstones, along with favoured tools and treasures. The tradition reflects the Egyptian practice of entombing the corpse of pharaohs with their household staff, or that of the ancient Greeks placing coins on the eyelids of the departed to pay Charon the ferryman for their passage across Acheron into the Underworld.

Each Chin tribes’ tattoo has its own design, with the Uppriu ethnic group tattooing the entirety of their face black including the eyelids. Since Burmese Independence, the suppression of the cultures of the frontier lands in favour of Bamar culture – what is referred to as ‘Bamarisation’ – has been deep and widespread, and since the 1960s pressure to end this practice has been adamant.

The government cited both the risk of infection and the fear that girls, ashamed of their heavily inked faces, would drop out of school early and retreat from wider society. The last generation of girls to be tattooed in Chin State was born in the 1990s.

Beyond the tattooing, one of the most curious things to see in Chin State is the playing of the nose-flute by women of the Makan ethnic group. As yet, no memos curtailing this custom have emerged from Nay Pyi Daw, therefore when in Chin State you should be able to witness this queer but charming practice.

Alongside the Karen, the men of Chin State were favoured by the British as the hardiest and most courageous soldiers in Burma. Indeed, Chin State is a far cry from the dandyism of Mandalay and the skinny Levis seen in Pyin Oo Lwin, and when hiking over the ragged peaks and rocky earth of Chin State, one may feel that this is a place where men are really men; their faces are more hardened, fingernails more dirty, and physiques more stocky.

Though the sparse traditional costume of the Chin tribes is now rarely seen, men continue to carry around large knives in wooden holsters, a hallowed gift that each boy is solemnly presented with on their naming day.

In place of the betel nut chewed throughout the country, most of the Chin partake in the strong smelling Kai Nee, moist and loose tobacco from India, which is taken in a similar form to Swedish snus. It was originally distributed to soothe toothache, and many Chin men, slightly tongue-in-cheek, still refer to it as ‘my medicine.’

Chin State is fast becoming a frequent pilgrimage destination for ardent twitchers. The mountainous pinewood forests are home to an assortment of colourful fly-catchers as well as the Orange Flanked Bush Robin, Fire-tailed Sunbird, and Chestnut-vented Nuthatch.

On Mount Victoria itself one can embark upon bird watching tours and look out for the Spotted Wren-Babbler and Myanmar’s indigenous White-Browed Nuthatch. There are also an assortment of sites along the road from Bagan to Chin State where one can pop out, binoculars in hand, and catch a flash of endangered feather and tail. 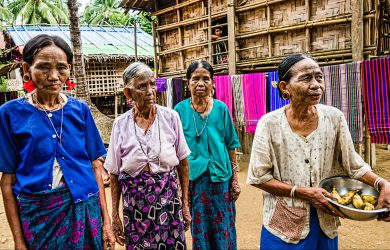 Into the chilly, fissured landscape of Chinland, a State like no other in Myanmar. 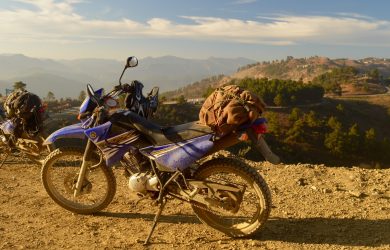