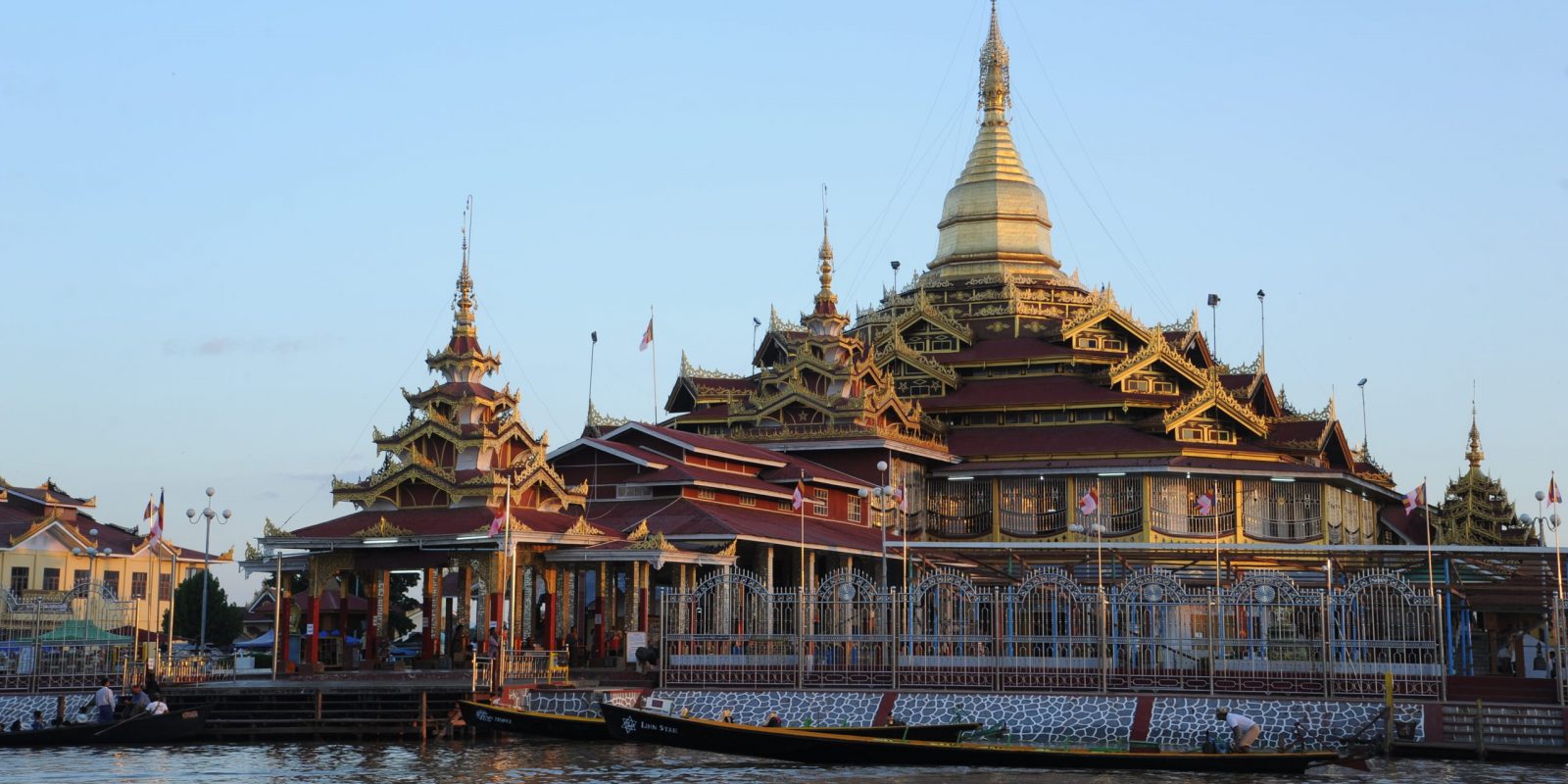 On arrival at Phaung Daw Oo – a large complex sprawling across walkways and spindly bridges – hands will reach off the jetty to help hoist you up from the boat, and then attempt to press little bags of seeds into your hands to donate to the flocks of pigeons on the terrace.

Within the temple are five Buddha Images smothered in a mass of gold leaf. During the popular Phaung Daw Oo Pagoda Festival four of the Buddha Images are ferried across Inle Lake on an imitation royal barge in the shape of the mythical bird the karaweik.

This festival takes place in October and is one of the biggest and most highly anticipated events of the year. It is put on with huge pageantry with boat races contested by the Inthar dressed in their traditional costume. The Phaung Daw Oo Pagoda Festival lasts for three weeks, with all the ethnicities coming together to watch the Inthar transport the Images and race their boats down the Nyaung Shwe canal.

The Phaung Daw Oo Pagoda Festival began in the 18th Century when the five Buddha Images of the eponymous pagoda were first transported by the Inthar to the nearby town of Nyaung Shwe, so to allow the townspeople there to see, pay tribute to, and place gold leaf upon the Images. The karaweik barge is tugged by a score of Inthar ‘100 man boats’. The boats progress in a column, each attached by a rope with the karaweik barge at the very end.

In 1965 the festival was extended to another 20 locations around Inle Lake, spanning 18 days. That same year a storm hit the lake and the barge sank along with all five Buddha Images. Though four of the Images were quickly recovered, no sign was there of the smallest one.

Miraculously, the story goes, the next day the fifth Image then appeared back in its place at the Phaung Daw Oo Pagoda. Since then this fifth Image remains in the pagoda while only the other four are taken around the lake.

These four Images have been so fervently adorned with gold leaf – we dare you, when the opportunity arises, to attempt to place your own leaf on through the mosh-pit of ardent and writhing men, as much gold smeared over their sweating brows as the Images themselves – that they no longer resemble Buddha but instead lumpy golden boulders. They are lovely nonetheless.

It is worth getting to one of these monasteries as the Images arrive, perhaps that of Lin Kin village, one of the most spacious monasteries that the Images visit. Here, as mothers cradle slumbering babies and monks smoke lazily in the corner, the more ardent will elbow themselves to the front to see the procession enter, hands pressed firmly together in respect, or perhaps clutching a flashing smartphone.

Market stalls are arranged outside the pagoda where one can view local Shan, Inthar, Palaung and Pa’O products, as well as settle down for a reviving cup of Myanmar tea. (Just watch out for errant snapsbangs thrown by the local children.) At the tail-end will be the disembarked Inthar, as pumped-up and enthused as men fresh from the first half of a game of rugger.

None of this however is as spectacular as watching the barge procession itself. Each village has one ‘100 man boat’ upon which the men of the village – ranging from the wrinkled to the puerile – wearing their traditional ochre trousers and matching t-shirts (which are today often sponsored), row the boat in the traditional Inthar fashion using one leg.

Watching the men row in unison, with the slow loop forward of the oar followed by the forceful thrust back and subsequent spray, is hypnotic. When tiring, the men shout to each other with encouraging cries of ‘Are we men? We are men!’ in the Inthar tongue. With the assortment of drums and cymbals, coupled with the orange of the baggy jumpsuit-like costume, the appearance of this procession can be eerily reminiscent of a chain gang, albeit one with much more fervour and far fewer dulcet tones.

Today, the Inthar villages of Inle Lake have taken to placing boomboxes on their boats, blasting out native hits as well as those that Western visitors may recognise from the ‘90s – Boom Boom Boom Boom by the Vengaboys was a favourite last time Sampan visited. On a raised platform in the middle, youths who have been spared the burden of the oar that day, clad in headbands and aviators, writhe and gyrate to the music with an ardency rarely seen in the West without pharmaceutical stimulants, their wrists twisting in the air with the elegance and poise of apsaras.

At times, through the combination of the ‘90s pop, the tinsel and shiny paper strewn over the boats and the gyrating men, the festival may appear to the less generous observer like a budget gay cruise.

And yet, taken in its entirety, the Phaung Daw Oo Pagoda Festival is one of the more wondrous demonstrations of piety to be observed in Myanmar, displaying the synergy between kitsch and serene artistry that the country does so effortlessly, and so well.