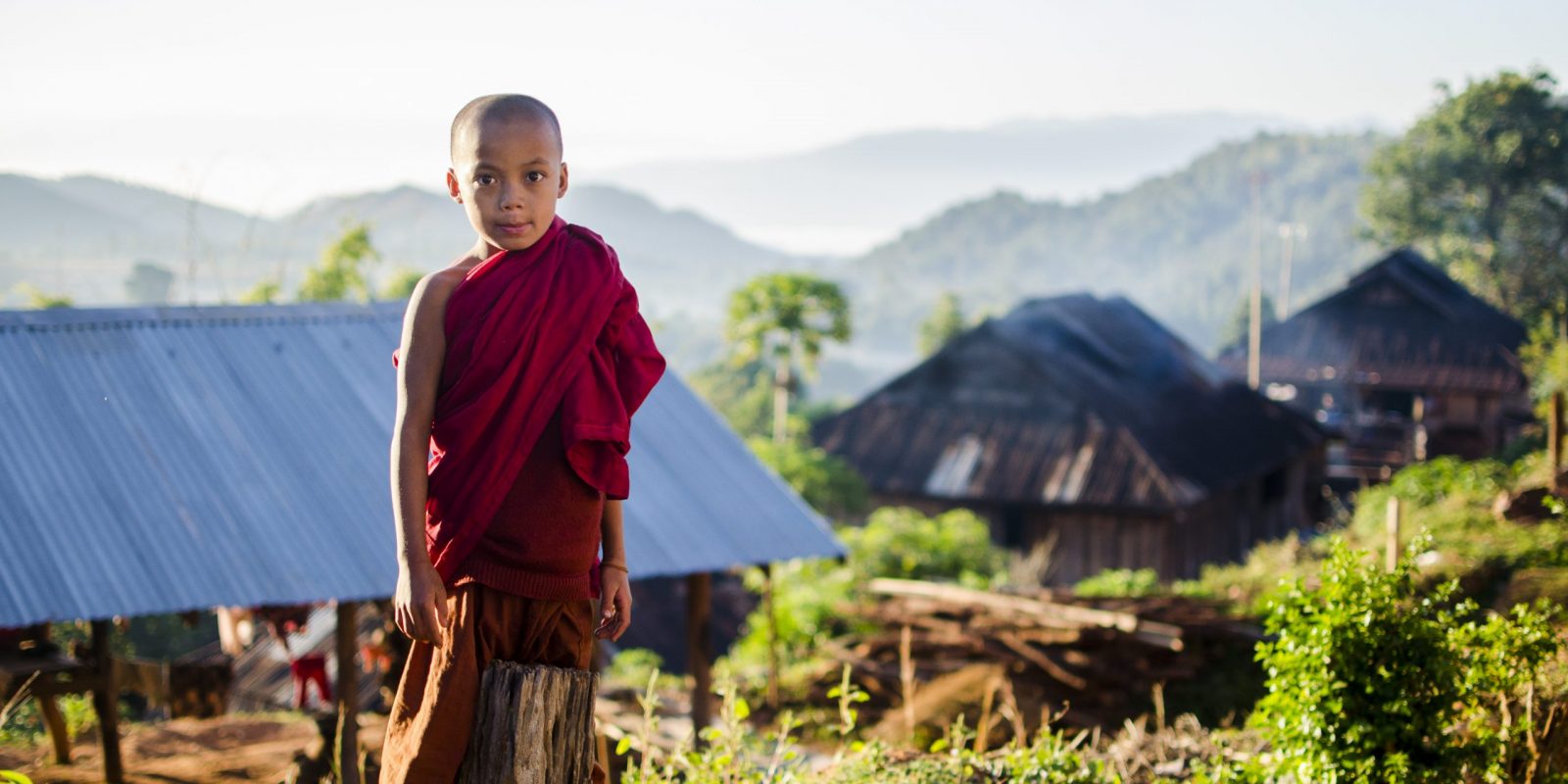 Trekking around Hispaw is more intrepid than at many of the other more common locations in Myanmar’s Shan State.

Though the jungles that once harboured tigers and wild elephants have been tamed, when hiking through the Hsipaw trees one can look out for Myanmar’s handsome giant black squirrel, as well as the startlingly techni-colour spiders suspended in webs a safe distance overhead. Rest breaks can be taken in cliff-side tea-shacks and forest monasteries or in whiskey-shops where the rice-liquor acts as fortification against sore feet and flagging spirits.

Up in the hills you will visit and – if you wish – stay the night with the people of the Palaung ethnic group, seeing their tea plantations and learning how they process the tea, both ‘dry’ and ‘wet’. Visitors should not take offence at the children who pop up behind fences to wave ‘bye bye’ as you approach their village; we are assured that they believe this to be a friendly salutation, and not a plea for intruders to move on.

Things to do in Hsipaw

There is plenty to keep you busy in the town of Hsipaw itself. It is a thriving trade town with local and foreign truckers stopping off on the way to and back from China, allowing for a burgeoning influence from Myanmar’s eastern neighbour.

There are a variety of pagodas and Buddha images dotted about the town that are worth a visit, principally the Mahamuni Pagoda at the southern end. To the north travellers can visit the Shan Palace (the ‘East Haw’) as well as the collection of crumbling stupas that have been christened ‘Little Bagan’ and the Sao Pu Sao Nai Nat Shrine – where locals push the empty swings to please the resident guardian spirit.

The recently nicknamed Sunset Hill (real name “Thein Daung Paya”) to the southeast of the city offers sublime views over Hsipaw and the Dokhtawaddy River and is a popular spot with both locals and visitors. Here the most industrious young bright things of the town often loiter so to practice their English with lone travellers.

Train to Hsipaw and the Gokteik Viaduct

Many visitors to Hsipaw travel on the idyllic railway route from Pyin Oo Lwin. An Upper Class ticket costs less than 3 US$ for the entire 5 to 6 hour trip to Hsipaw, granting travellers a spacious and cushioned seat to take them through the invigorating experience of train travel in Myanmar.

Indeed, save for the amount of white faces, little has changed since the American travel writer Paul Theroux took the journey in the 1970s, recounted in his book The Great Railway Bazaar. The track is bumpy and at times the carriages will sway from side to side frantically. Vendors will come on at regular intervals with nuts, crisps, soda, beer and other refreshments, and there is usually time to stretch your legs on the platform at each station visited.

Thirty-four miles northeast of Pyin Oo Lwin is the Gokteik Viaduct, the highlight of the train journey and the principal reason that most people, local and foreign, make the trip in the first place. Built in 1901, the viaduct stands 102 metres high, stretching 693 metres across (2, 275 feet); at the time of construction it was the second highest railway bridge in the world. It crosses the Gokteik Gorge, which cuts a violent gash through the otherwise smoothly undulating Shan Hills.

Top viewing spots are available from Gokteik Station and when slowly creeping over the bridge itself. After Gokteik, tourists have the option of jumping out at the bustling market town of Kyaukme and from their driving either back to Pyin Oo Lwin or Mandalay, or onwards to Hsipaw.

Each year, three days after the October full moon, the townsfolk of Hsipaw celebrate the Mahamuni Pagoda Festival. Starting shortly after midday, a slow procession of offerings is led up to the pagoda along the main street. These offerings of ‘precious things’ are laden upon constructed towers of bamboo which sway precariously on tractors and trucks, or are carried by men and boys from the town.

Crowds and stalls line the slow-moving procession, as ghetto blasters blare out K-Pop and ardent enthusiasts, made-up with thick mascara and black lipstick, writhe, gyrate and leap about in a carnal, heady throng between the offerings. Men and boys of all ages are caught up in this communal hysteria and it is one of the most exhilarating and queer spectacles of Myanmar piety that travellers can witness when visiting the country.

Another optimum time to visit Hsipaw is in March when the town holds the Festival of Baw-Gyo, a pagoda renovated at the bequest of King Thibaw, the last king of Burma. At this time the different ethnicities of Shan State all adorned in their traditional wear come to celebrate and pay respect, as well as to visit the variety of stalls selling goods and food and the little stages that are erected for theatrical and musical performances.

Hsipaw History: Lords of the Sunset

The Burmese call the town ‘Thibaw’, and it is after this town that the last king of Myanmar was named, Thibaw Mintha, or Prince of Thibaw, before he succeeded his father and became Thibaw Min, King Thibaw. The local pronunciation is ‘See-Paw’, meaning either ‘Four Cooking Pots’ of ‘Four Corners’ in Shan language. Whichever it is, the name comes from the four pots that were reputedly buried at the four original corners of the ancient city so to ensure prosperity and longevity.

Though many locals may begrudge the Burmese pronunciation, which they see as a bastardisation of their language at best, and semantic colonialism at worst, they cannot deny the Thibaw connection …

Although Hsipaw and the other townships were tributary states of the Bamar kings during the Konbaung Dynasty (1752 – 1885), they were allowed a certain amount of autonomy and a mutual respect rose up between the gentry of Shan and the Konbaung. The sons of the ruling families of Shan State would be sent to the courts of Ava, Amarapura and Mandalay to be brought up with the Burmese princes, where they became known as ‘Naywin Bayin’, or ‘Lords of the Sunset.’

When Mandalay fell after the Third Anglo-Burmese War in 1886, the British officially annexed the entirety of Upper Burma. However it was not until two years later that the Shan States including Hsipaw joined Burma proper under British rule.

The work of the industrious colonialist Sir George J Scott, later known to the natives as Shway Yoe, is almost exclusively lorded with the success of winning over the Shan sawbwa (princes), through various amounts of charm, coaxing and coercion. After this, the young Lords of the Sunset found themselves growing into their long trousers not at the ornate Konbaung Court but instead at institutions such as Harrow and Eton.

The Shan sense of autonomy was sustained and as a ‘frontier land’ the British granted them far more devolution than the predominantly Bamar regions inland. Naturally, as the prospect of Burmese independence loomed in the 20th Century, many in Shan State were nervous about coming under the yoke of the Bamar after so many years of quasi-home rule. Thus, bloody strife ensued when the British withdrew in 1948 and independent Burma’s first Prime Minister U Nu attempted to govern a unified nation.

The Shan Palace in Hsipaw is the former residence of the last Prince of Hsipaw, Sao Kya Seng, and his Austrian wife Inge Sargent. Sargent’s book Twilight over Burma: My Life as a Shan Princess, recounts her move to Shan State and the events that led up to the disappearance and suspected murder of her husband at the hands of the military when they seized power in the coup of 1962.

Despite letters sent each year, the Tatmadaw (the Burmese military) continue to deny having either arrested or executed Sao Kya Seng.

One can visit the ‘East Haw’ palace in Hsipaw, where the cousins of the two daughters of Kya Seng and Sargent (who currently live in the States) now reside, and recount the history of the building and the family to visitors.

To this day, there are insurgent groups in Shan State fighting the Tatmadaw. 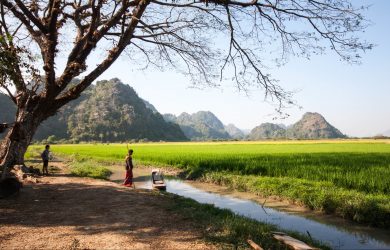 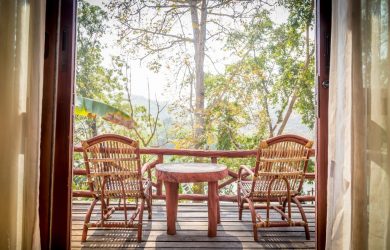 Hidden away, guests can slip out for a bowl of noodles or to watch buffalo in the river. 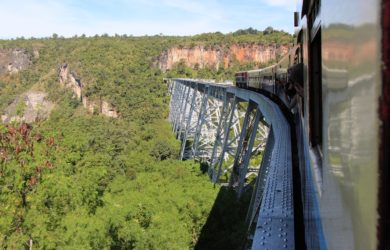 Train travel reaches its zenith between the City of Flowers and the alluvial hills of Hsipaw. 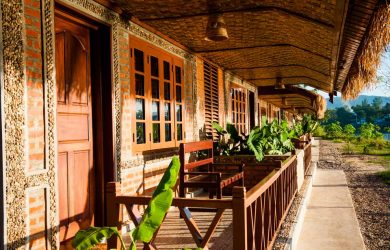 On the banks of a Dokhtawady River, looking over the town of Hsipaw.