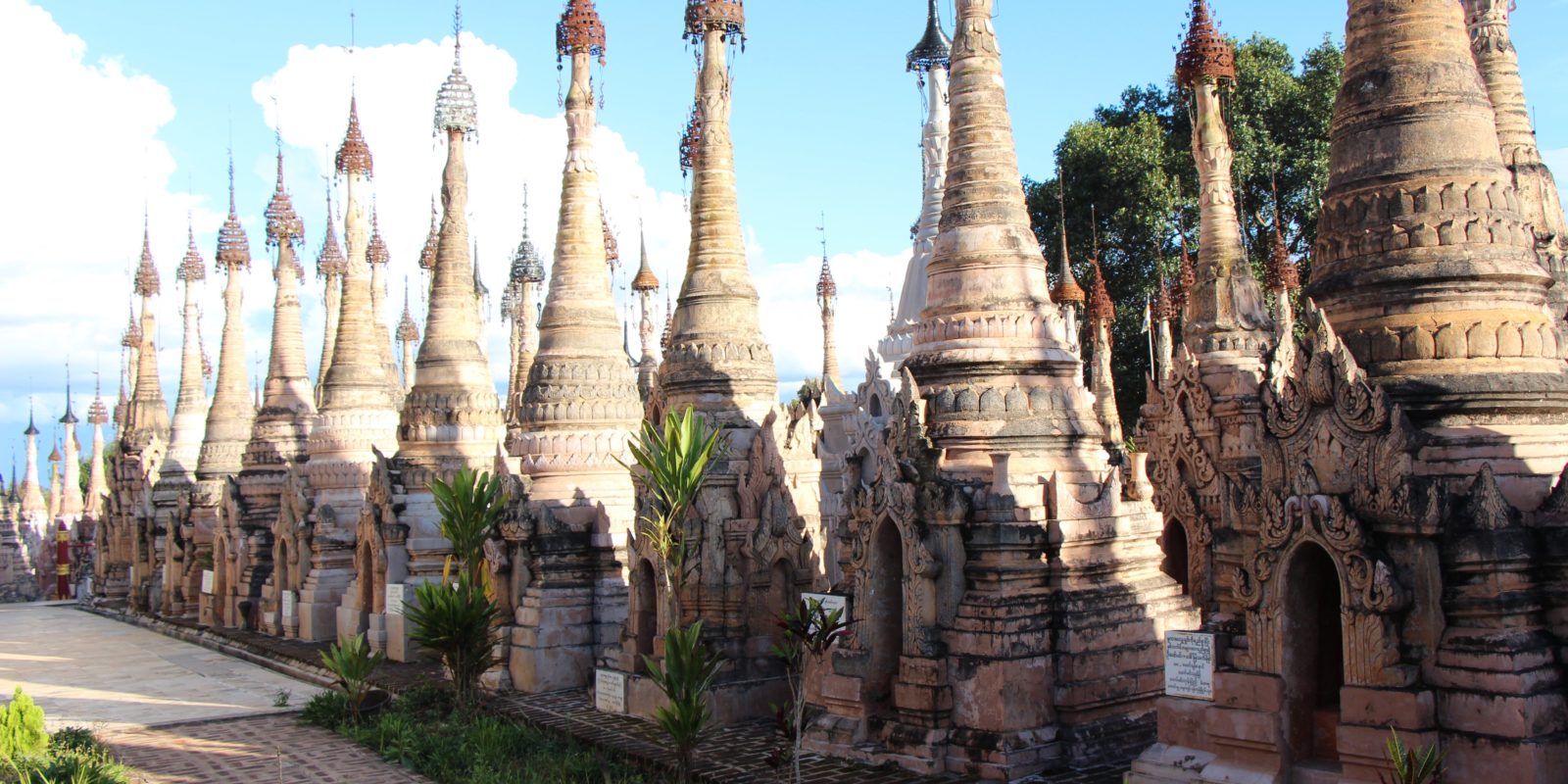 The Pa’O village of Kakku saw very few foreigners at all until the turn of the millennium. It became known around the world after a handful of intrepid travellers in the 1990s followed up on rumours of the most remarkable Buddhist monument said to be found near a village somewhere east of Inle …

What they found was a one kilometre squared pagoda field of over 2, 500 stupas, all made out of brick and rising to between 1 and 3 metres high, many adorned with characters and signs for good luck. Visiting today it is hard to believe that this destination was ever a secret due to its impeccably manicured lawns, smart teak restaurant and the couple of community lodges with pagoda views.

Alongside many of the Kakku pagodas are little ornate figures carved in stucco; some are still brightly coloured but the paint of most has already worn away. These figures range from musicians, dancers, to mythical winged-beings.

There is a slightly gaudy monastery to the side of the field, which nonetheless has a selection of benches under trees providing much needed shade. There is also a market selling chilis, rice and soya bean cakes, roasted pumpkin seeds, shelled peanuts and other delicacies to revive flagging visitors.

Not far from the Kakku pagoda field is the Kaw Taw Gyi Nar Baung Market. Although the stalls selling Pa’O bags, snake-head fish and bags of fried yellow ants are likely to have packed up by lunch, the adjacent cow market lasts all day. Deals are said to often take an entire afternoon to be finalised. Walking around the market you can observe circles of men squatting on their haunches and looking grim, smoking cheroots and casting glances at the pacing cows who grunt and paw fitfully.

The Road from Mandalay

Mythology of the Kakku Pagodas

To the left side of the entrance to the Kakku pagoda field is a glass shrine within which is housed a gold statue of a wild boar. This comes from the legendary genesis of Kakku’s pagoda field.

It is said that sometime in the 13th Century, an old Shan couple living in the village began to notice on their daily walk home from working in the fields a shining light hovering over the patch where the Kakku pagodas now stand. Each time that the couple approached the field in question to ascertain the source of the gleam, the light disappeared, and they were unable to find any clue at all as to what may have caused it.

Eventually, the couple decided to dig up the field so to find the treasure that they were sure was buried beneath and producing the light. They were to find none, but the fresh earth that they had upturned when digging attracted the attention of the local pigs, who quickly came to trample and wallow in the mud.

Nuzzling and rutting, the pigs eventually hit upon the elusive treasure. The ratified couple rejoiced, and quickly set about using their riches to build the first pagoda of the Kakku field. Modest in size, over the centuries the story of its creation encouraged many others to add their own pagoda or renew and renovate those already there.

The field was originally known as ‘Weq-gu’, ‘weq’ being the Burmese word for pig. Subsequently, the boar is venerated at Kakku, and you are encouraged to ‘feed’ its image with donations. This image has himself been renovated and gilded golden by a Singaporean monk born in the Chinese year of the pig, who donated a large amount of money to Kakku in 2000.