Best of Buddhism in Myanmar 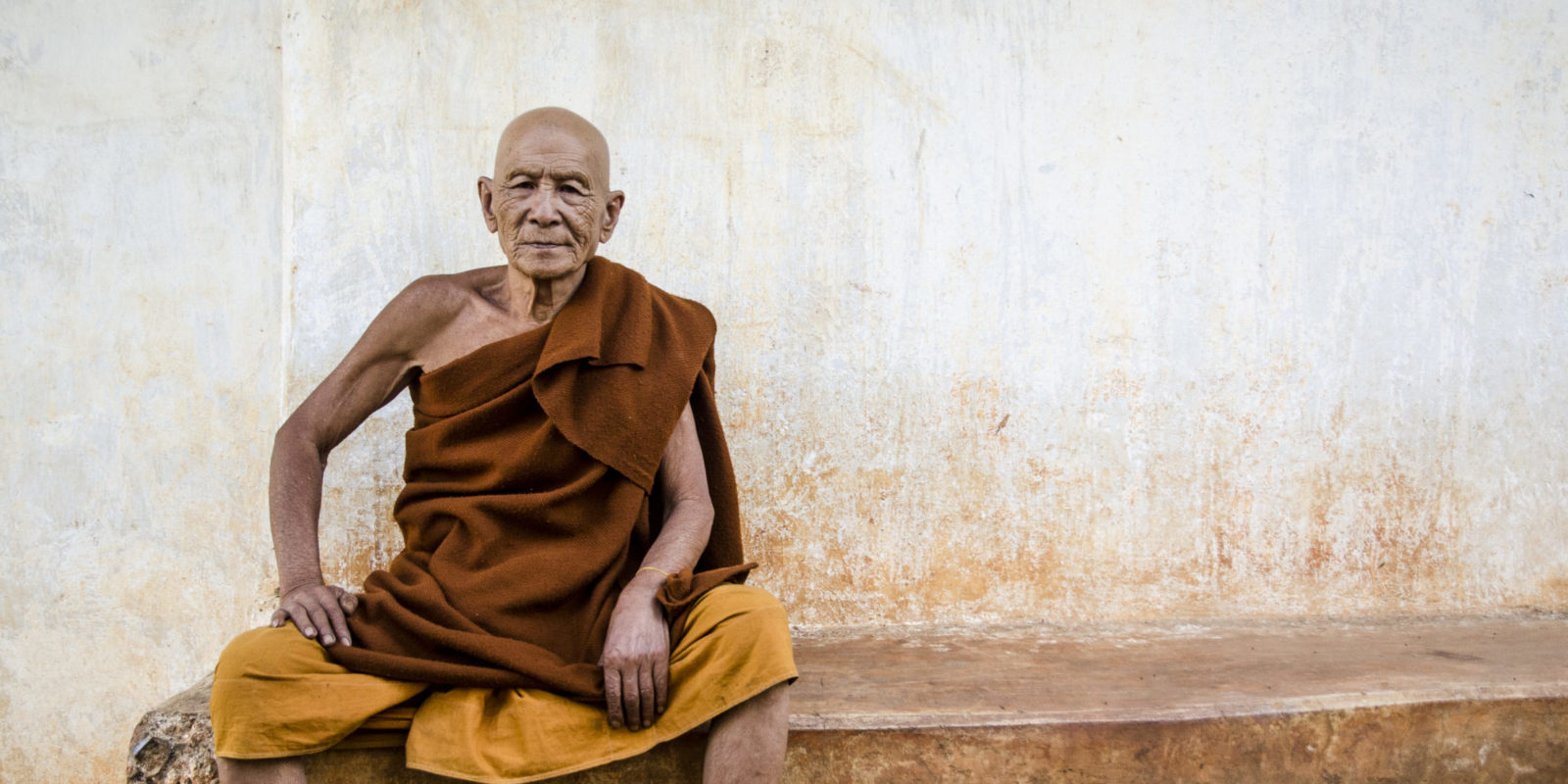 Best of Buddhism in Myanmar

“It is remarkable how intimate a part religion plays in the life and thought of the Burmese, when there is no attempt to canalise it into public observances restricted to one day in the week.”

So wrote Norman Lewis in his travel account Golden Earth, when pondering on Buddhism in Burma in 1952.

Buddhism is the prevalent religion of Myanmar, exultantly on show and deeply ingrained in the mindset of the majority. There is no official state religion in Myanmar but 89% of the population are Buddhist, predominantly of the Theravada strain. Although globalisation will undoubtedly make its mark upon the country in the coming years, many people of Myanmar say their profound faith is what will prevent the country becoming like their neighbour Thailand where – at least in the major cities and tourist honey spots – the culture is not nearly as conservative nor outwardly religious.

Although many young Burmese now wear skinny jeans as commonly as the traditional longyi, when in Myanmar travellers will notice the youth meditating and praying, genuflecting to Buddha images and placing their hands together in respect to shrines, just as commonly as their parents.

Whether travelling with a battered copy of Lonely Planet under your arm, enlisting the help of a local guide, or venturing out solo, visitors to Myanmar will constantly be coming across Buddhism. Therefore, this article does not intend to be a checklist of things to see in Myanmar, but instead a celebration of the exuberance of Buddhist Burma.

‘A Burman does not notice the multitude of the religious edifices in his country till he leaves it and finds how more sparing other nations are in their place of worship.’

So wrote Sir George Scott on the Burma Buddhist in his book ‘The Burman’ published in 1882. The statement holds true today.

When flicking through a guide book of Myanmar, travellers may find themselves getting tired of pagodas. The truth is, in Myanmar, one does get tired of pagodas. Not because they are dull but because there is such a profusion of them; coming across a red brick church or turreted mosque can be a welcome respite.

However, it would be amiss if this article was not topped by Shwedagon Pagoda, the most revered religious site in Myanmar. The stupa is 99 metres high and stands atop a hill 53 metres above sea level. The stupa is sheathed by 13, 153 pure gold plates – worth roughly US$ 3.2 billion.

Yet what makes Shwedagon so special is not its height or gold, but the fact that it is not a monument to past piety but a living expression of it. Visitors go to Shwedagon everyday, decked out brightly, walking around the platform with not graveness but gaiety. Turning any corner you are as likely to see meditating monks as you are snapchatting teenagers and toddlers squawking raucously on tottering legs. It is in this communal good cheer, rather than in solemn silence, that Buddhism in Myanmar is most commonly displayed.

When in Myanmar travellers will habitually see novices (‘ko yin’) scuffling about playing street football and horsing about – as boys do the world over. One should not forget however that entry into the monastery – the novitiation ceremony “Shin Phyu” – is an incredibly sacrosanct event in the life of a Burmese boy that marks his accession to the full dignity of humanity.

Almost every Buddhist boy enters the monastery, even if just for a few days, usually around their 10th birthday. The ceremony reflects the transformation of Rahula, son of Gautama Buddha, from prince to the first ever novice.

In the morning the boy is thoroughly scrubbed by the women of the household before having make-up, costume and as much golden regalia as can be found applied to his person to present him in the form of a prince. He is then taken to the monastery atop a horse, or if in the city a motorbike or in a car; if these are not to hand the shoulders of a strong older brother or cousin will be enlisted.

Once at the monastery, after being washed by a young woman the boy’s head is shaved by a monk while leaning over a white cloth held taught at the corners by members of his family. Subsequently the boy is presented with robes, his parents pay obeisance and he is given a new name to adopt until he returns to his worldly existence. The pageantry and exuberance makes any bar mitzvah or Christian confirmation seem dull in comparison.

Watching Buddhist monks in Myanmar collecting alms in the morning has become an iconic image and is often an enchanting experience. However the serenity of these scenes can be blighted by a circus of tourists snapping away on cameras.

This has begun to occur in Burmese Buddhist temples and places such as Mahagadanyon Monastery in Amarapura. There thousands of monks, novices and pre-novices line up each morning in the courtyard of the ornate monastery whilst in and out of their jostling rows worm trigger-happy backpack-clad tourists, pushing lenses close up into their faces with regard for nothing save capturing the best photograph.

There are places where such ugly scenes can be avoided.

Sagaing is often referred to as the heart of Buddhism in Myanmar; there is thought to be over 600 monasteries in and around Sagaing housing an estimated 5,000 monks and novices in addition to an estimated 3,000 nuns. Around every cobbled alleyway upon this charming hill one will be able to find monasteries free of braying tourists and the clicking of cameras.

Walking through the streets travellers will be immersed in a sea of orange and pink robes. Even at the principal pagodas of Sagaing one need only nip down one of the side steps to have the chance of falling upon a lone monk, perhaps drawing on a cheroot, ready for an amicable chat with curious travellers.

The Burmese are renown for their aptitude for leisure and developing ingenious ways to celebrate. There are scores of fantastic Buddhist festivals to attend in Myanmar and one of the most spectacular is that of the Phaung Daw Oo Pagoda on Inle Lake.

At this festival four of the five Buddha images of Phaung Daw Oo Pagoda are ferried from village to village around the lake over the course of three weeks. They are carried in a traditional Burmese barge in the form of the mythical bird the karaweik. The barge is pulled along by a score of Intha ‘hundred-man boats’. The rowers are men and boys from different villages on and around the lake. It is possible to hire your own sampan to be taken out onto the lake to watch the procession.

Today the villagers have taken to placing boomboxes on their boats, blasting out native hits as well as those that Western visitors may recognise from the ‘90s. On a raised platform in the middle, men who have been spared the burden of the oar that day, clad in headbands and aviators, writhe and gyrate to the music, their wrists twisting in the air.

It is a wondrous display of the mixture of revelry and piety that is accomplished with such panache in Myanmar.

The People of Myanmar

Warm hospitality and generosity is a trait not only espoused by Myanmar Buddhists, but one struggles to distance the two when in Myanmar, especially when it is neatly encapsulated in the Pali word metta.

In 2016, for the second year running, Myanmar came at the top of the Charities Aid Foundation World Giving Index that calculates the percentage of citizens who donated money, volunteered or helped a stranger in the previous month.

It was recorded that 91% of Myanmar people had given money to charity in the past year, 62% had helped a stranger, and 55% claimed to have volunteered. Many in Myanmar say that it is because of the military rule that they have become such good samaritans. During the junta years no-one could rely on the authorities to help those in need, whether in times of acute natural disaster or when suffering abject poverty. Therefore the citizens rose to the challenge and took it upon themselves to help each other.

Travellers will experience this generosity first hand by Buddhists in Myanmar and of course non-Buddhists too. They will be invited to join in family celebrations within their own homes and there presented with food, drinks and Burmese cheroots. Security guards have been known to get soaking wet escorting travellers into hotel lobbies under the shelter of their umbrella and taxi drivers to transport foreigners around the city free of charge in search of a lost phone.

And when nothing at all can be given, a bright smile is always on offer; a smile as shimmering as the Shwedagon stupa itself.

Interested in witnessing Buddhism in Myanmar firsthand? Have a look at our suggested journeys here.