Samkar is the smaller lake to the south of Inle which through reed-filled waterways connects to Phekon and Kayah State.

Centuries ago, it is said that the prince of Samkar lost his princedom to the prince of Nyaung Shwe through a foolhardy bet. The remains of this princedom can be seen at the pagoda fields of Samkar. Here there is a collection of zedi, amongst which nonchalant cattle graze, indifferent to the architectural treasures that surrounds them.

Just north of Samkar is Ja Kan where there is a mammoth and ornately gilded monastery next to a cluster of crumbling pagodas.

Near to Ja Kan is Tharkaung, an ancient pagoda field with zedi larger than those at Indein. Rarely visited by tourists, at Tharkaung you will likely share the fields with no others but boys from the village who, between casting curious glances at you and your party, will concentrate their time on trying to knock fruit out of the trees.

Phayar Taung is a small fishing village that holds one of the region’s famous five-day markets. It is home to a monastic school where many children from surrounding villages come to learn. The best way to explore the countryside is on foot. Immerse yourself in the local culture, walking and meeting the people of the region.

During your walk you can visit a Pa’O village, a Shan village and an Intha village. You can see pagodas, traditional hand-weaving, handmade jewelry, hot springs and verdant fields and mountains.

The more energetic can hire bicycles to explore the villages or canoes to traverse the waterways. 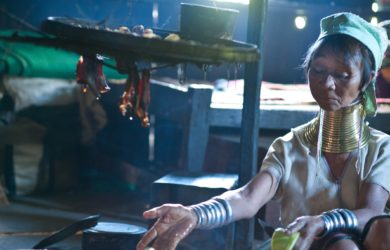