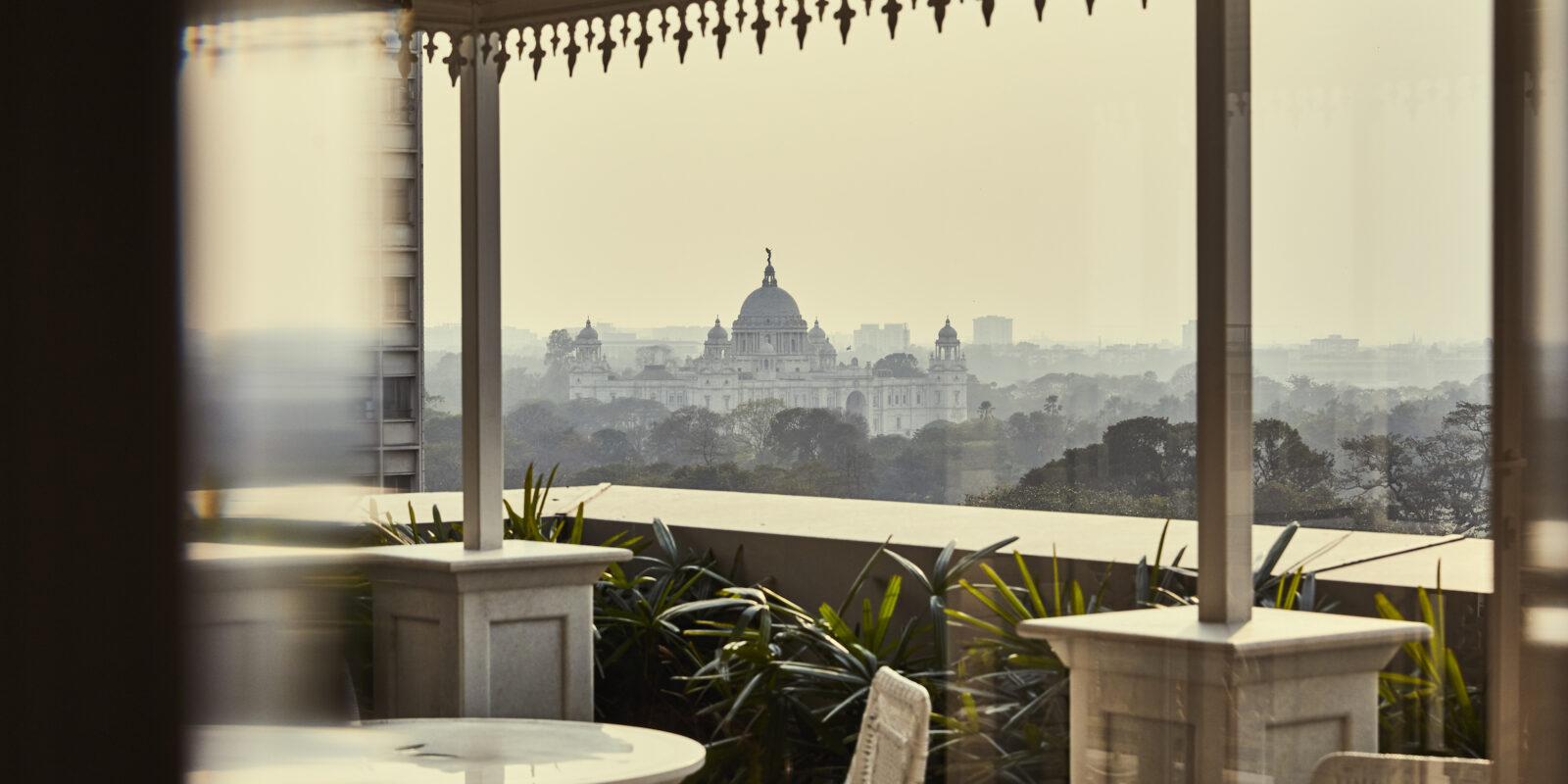 The signs reads “welcome to the City of Joy”. Avik turns to us, shakes his head and says that Kolkata is a dying city.

“No that is too polite: a dead city.”

The British arrived here in the 1600s and established Fort William soon after. What was once jungle and thatch became the City of Palaces. It became the “Star in the East” as the British built monuments and merchants built mansions.

Down the middle of the city runs Chowringhee. This is Kolkata’s Piccadilly where the great and the good come out to play. Chowringhee leads to Dalhousie Square, at the centre of the city. This is the site of the General Post Office, Government House and Writers Building. Once at Writers, over a hundred million Indians, from Bihar to the borders of Burma, were administered.

At the centre of Dalhousie is a large, rectangular pool of water the colour of banana leaves – Lal Dighi – once used for washing, swimming and religious pursuits, now placid and disturbed only by falling leaves.

Kolkata was the heart of India’s independence movement: home to revolutionary poet (and Asia’s first Novel prize winner) Rabindranath Tagore and founder of the India National Army Subhas Chandra Bose. It was partly due to the political fervour of Bengal that led the British to move their capital city from Kolkata to Delhi in 1911.

By 1947 the British had left completely and thirty decades later Kolkata was in the clutches of communism. Soviet blocks now loom above Writers and the General Post Office. It was in 1985 that prime minister Rajiv Gandhi first described the city as “dying”. That was before Mother Theresa and the more optimistic moniker of ‘City of Joy’. Writers is empty. The General Post Office groans.

If India is a land of contradictions here in Kolkata they are at their zenith: the chaotic and the peaceful, the outdated and futuristic, the opulent and the poverty-stricken. There are malls but the true Kolkata shopping experience is to be found in the bazaars, rubbing shoulders with shopkeepers and hagglers.

True Kolkata is to be found on the streets where the people are quick to raise their voices in sloganeering and protesting; where cars constantly honk but no-one is in a rush to get anywhere; where local grandmasters play chess under the Gariahat flyover; where youngsters play cricket on the Maidan; where, amongst it all, innocuously round the corner, trundles a tram.

Kolkata is not for everyone, the journalist Vir Sanghvi says:

This soul is best found in the north of the city – in the small alleyways leading to the former dens of freedom fighters; in the century-old sweet shops which still attract crowds; in Kumartuli where images of gods are crafted and, as the Bengali author Amitav Ghosh writes, where can be found “pavements lined with rows of grey-brown clay figures, some just torsos, full-breasted but headless, with tufts of straw blossoming out of their necks, some legless, some without hands, some with their arms curved in phantom gestures around invisible objects – weapons, sitars, skulls.”

And in the centre of it all, lit up with candles, small temples to Kali.

Kali: the Destroyer. Black as night, her eyes bloodshot, garland of skulls round her throat and her tongue lolling out in an ecstasy of violence. It is believed by some that the city takes its name from her. Beneath the metropolis built by merchants and bankers, still beats the black heart of the goddess of destruction.

Here, around Sovabazar, they say: “the star still shines”.

Or as one life-long resident of the city said to us once:

“We know that we are not what we once were. But we were something once. And that should not be forgotten. This is still Kolkata.”

Within India today, Kolkata is most known and loved for its cuisine. Food in Kolkata is predominantly Bengali but has been shaped by its neighbours and by ambassadors from culture’s further afield that have once called Kolkata home.

Bengali cuisine is known for its varied use of flavours as well as is broad spread of confectioneries and deserts. It was strongly influenced by the Mughals who conquered Bengal in the 13th century and brought with them dishes from Persia and Arabia. Dishes such as biryani, korma and bhuna, once reserved for the higher classes, came to the masses via the cooks of the Mughals.

(In Kolkata today, the best biryani and mutton chaap can be found at Royal Indian Hotel on Chitpur Road.)

This influence continued under the British Raj when Kolkata became a place of refuge for a variety of exiled nawabs. Along with these exiles came cooks and spice mixers who – as the patronage of the nawabs deceased – assimilated into Kolkata society. With these cooks came knowledge of spices such as jafran and mace, the use of ghee, and the practice of marinating meat with yoghurt and chilli. Deserts, previously based on jaggery, shifted to milk, cream and sugar, as well as more expensive spices such as cardamom and saffron.

When in Kolkata, you should explore this culinary diversity. Try Kasturi or Radhuni for Bangldeshi food and Kewpie’s for Bengali; for momos and other Sikkimese dishes go to the Blue Poppy Thakali & Boma Asian Bakery at Sikkim House; Tangra or Golden Joy for Kolkatan Chinese; Nahoum’s for Jewish baked goods; Flurry’s for chicken croissant and rumballs.

Some of the best food to be found in Kolkata today is on the street. Sweet shops pepper most streets, displaying paneer-based confectionaries such as sandesh, rosogolla (go to KC Das on Esplanade or Balaram’s on Bhowanipur) and chana payesh. We can also recommend the madhupak sweets from Chittaranjan at Bagbazar, the nolen gurer sandesh (milk jaggery fudge) from Nakur’s at Hedua and the mishti doi yoghurt from Bim Ch. Nag on Park Street.

A common snack in the evening is phuckha (“panipuri” in the rest of India), a fried dough casing with a potato and chickpea filling, necessary to east swiftly and in one bite before the entirety disintegrates in your hand. We also recommend the chicken bharta from Russel Punjabi Dhaba on Russel Street; soota kebabs on Phears Lane and duck egg Mughlai parathas from Anadi Cabin.

The much-loved double-egg chicken roll is great to eat on the go. You can find this throughout the city but the most famous outlets are Nizam’s behind New Market and Kusum Rolls on Park Street. We also recommend Zeeshan on Syed Amir Ali Avenue.

There were once three villages situated on the banks of the Hooghly River, not far from the ancient temple to the wrathful goddess Kali. In the late 1600s these villages were ruled by the Nawab of Bengal who came under the suzerainty of the Mughals in Delhi.

In 1690 the British East India Company was granted a licence to trade. On 24 August, with “yes rains falling day and night”, Job Charnock, a young administrator of the East India Company, began planting his settlement on the swampy ground between the villages of Kalikata and Sutanuti. It was adjacent to a small Armenian trading station, and there was a Portuguese one just across the river.

The Company built up an increasingly fortified trading post known as Fort William. After a series of tussles, by 1793 the Company was strong enough to abolish native rule and took full control.

After Charnock’s death, Calcutta grew to become the jewel among the Company’s overseas trading stations. As William Dalrymple writes:

“… its fortifications, wharves and honeycomb of warehouses now straggled three miles down the silt banks of the river, towards the jungles of the Sunderbans, its flat dominated by the low ramparts of Fort William, and a number of grand new ‘Grecian’ buildings: Roger Drake’s Governor’s House, a school, the playhouse, St Anne’s Protestant church, St Nazareth of the Armenians, a hospital, the jail, the grand tank for the drinking water and increasingly well-stocked burial ground for the dead …

“The Calcutta punch houses were always full of captains and their crews of boatswains, mates and pilots, drinking away their sorrows before heading to Calcutta’s notorious brothels.”

Clive of India, the city’s most famous British resident, described it as “one of the most wicked places in the Universe … Rapacious and Luxurious beyond conception.”

Under Company rule, and later under the British Raj, the city of Calcutta was the capital of British India until 1911, when the centre was shifted to Delhi. This move came largely in response to Bengali political activity against the British – both the revolutionary poet Rabindranath Tagore and founder of the Indian National Army Subhas Chandra Bose were Bengalis living in Kolkata.

After independence, civil strife and communist rule saw Kolkata lose pace to other Indian cities such as Delhi, Mumbai and Bangalore. In 1985 the prime minister Rajiv Ghandhi described Kolkata as a “dying” city. By the end of the 1990s, around the world the name ‘Kolkata’ evoked images of Mother Theresa and extreme poverty.

West Bengal’s chief minister today is Mamata Banerjee, who founded the All India Trinamool Congress in 1988 after separating from the Indian National Congress.