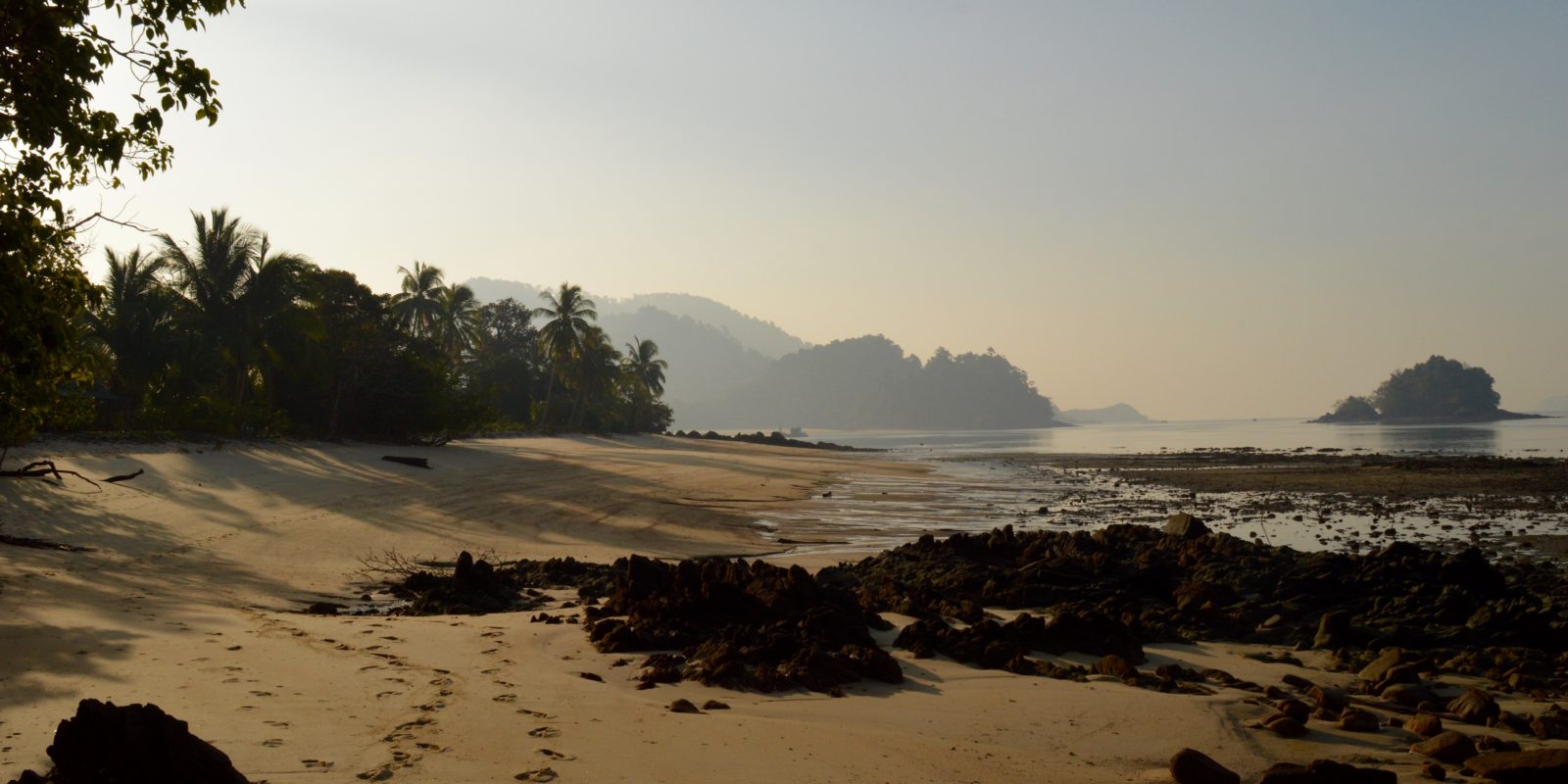 Set in Thailand and filmed near Koh Phi Phi (though actually based on an island in the Philippines), those islands that were once so idyllic are now overrun with all that Richard was attempting to escape: tour boats, restaurants serving Western cuisine, and shirtless backpackers playing Aussie Rules.

In Myanmar, paradisiacal islands still exist. On the majority of these beaches you will find no tourists, only monkeys, and no hostels, only the huts of fishermen. The sand is a dazzling white and the water a shimmering turquoise.

In the novel Biggles Delivers the Goods by the British author and RAF pilot Captain W.E Jones, the protagonist Squadron Leader James Bigglesworth flies over the Mergui Archipelago of Myanmar on his way to fight the Japanese. The passage reads,

‘To the right, the horizon was defined by a long dark stain that was the forest-clad hinterland of Lower Burma. Below the aircraft, like a string of green beads dropped carelessly on blue velvet, were the islands of the archipelago, lonely, untouched by civilisation …’

Located in Tanintharyi Region, the southern strip of Myanmar that borders Thailand, the Mergui Archipelago (Myeik Archipelago) is one of the most sumptuous segments of Southeast Asia. There are estimated to be 800 islands scattered across the 400 square kilometres of the Andaman Sea.

The archipelago features virago islands, coral reefs, tropical fish, lagoon caves and undisturbed wildlife. The port of Kawthaung at the southernmost tip of Myanmar is the main departure point for snorkeling and diving around the Myanmar islands, but one can also travel from Myeik, dependent upon permits from the Ministry of Hotels and Tourism.

Many of the islands are home to the Moken people. A nomadic people living on the islands and their boats between Myanmar and Thailand, there are thought to be only between 2, 000 and 3, 000 Moken alive today, making them one of Myanmar’s most endangered ethnic groups.

The Moken are of Austronesian descent and have lived on and around these islands for centuries. On the morning of the 2004 Boxing Day Tsunami, it is said that the Moken read the waters correctly and vacated the low-lying islands for higher ground before any of them came to any harm.

For the most part, the Moken continue to live as they always have – fishing with three pronged spears, trading primarily in sea cucumber and fish, as well as tungsten (wolfram), prawns, salt, rubber and pearls. Naturally, their way of life is coming under threat as this pristine stretch of ocean opens up to the world.

The Town of Myeik

Myeik has a rich history of cut-throat privateers and despotic pirate captains, and today still appears a prime setting for a Robert Lewis Stevenson novella. Retro cars and buses in diluted blues and reds add to its scruffy yet resiliently vivid aesthetic.

The town is also peppered with some of the finest Buddhist, British and Portuguese architecture to be found south of Yangon. Theindawgyi Pagoda is situated on Office Road just beyond the old British Commissioner’s House, offering striking views over Myeik and the Tanintharyi River.

Just opposite the Strand is Papit Island where there is a Reclining Buddha gazing back at the town. On the island one can climb up to the stupa perched on the hill as well as follow the coastal track past little bamboo huts and children playing in swampy lagoons. There is a night market along the Strand every evening where you can try a selection of seafood via a point-taste-choose system. From Myeik, one can take a boat up to the town of Tanintharyi, displaying architectural remnants of the many empires that have possessed it as well as the remains of an ancient wall that failed to keep any of them at bay.

Up a steep set of crumbling stairs from Bogyoke Road is Bu Pagoda. The stupa and terrace itself are relatively modest however when passing over the platform one comes upon a small crumbling monastery courtyard where novices and boys from the town may be found playing games with sticks and stones. Following your nose around the corner you will find more stone stairways and rooms housing dusty and disregarded Buddha Images, and even a small platform with a couple of benches where you will be able to sit and look over Myeik in seclusion.

Following Office Road down from Theindawgyi away from the centre of Myeik takes one past a beautiful monastery in a shade of Tuscan-yellow built by the Portuguese. Seemingly too large for the steep road it is situated upon, crane your neck up to the terrace and see if you can spot novices hanging up their linen or treating a favourite pariah dog to a soapy bath.

Continuing downhill to the end of this road there is a chaotic roundabout at the centre of which is a golden statue of Bogyoke Aung San, the ‘architect of Burmese freedom’, uniformed and astride a horse. Take a left at Myat Lay Street which leads down to Mingalar Lake, lotus-leaf crested and hosting upon its banks longyi-clad youths serenading in plaintive tones to the strums of an acoustic guitar.

At the southern end of Myeik is the shipyard. Crossing over the bridge to this side of town things take a slightly Dickensian tone. Friendly, albeit overtly curious faces will follow any foreigner through the sojourn in Aung-all-Alones, where the dogs are slightly more malnourished, the children a little dirtier, and every face that much more lived in.

Let none of this deter the faint-hearted!

Just a five-minute walk along the bridge road will bring the intrepid visitor to the shipyard, where some of the largest and finest boats sailing on the Mergui Archipelago are built. Here you can see them in construction, with wiry, bare-chested, dark-skinned men with cheroots hanging from their mouths swinging and sauntering over the incipient flotilla.

Those wishing to know more of Myeik’s history could do worse than start with a copy of Siamese White written by the former British Commissioner of the town, Maurice Collins.

The book is a biography of the British privateer Samuel White of Bath, essentially a latter day Filipe De Brito, the Portuguese marauder and some-time Emperor of Thanlyin (then Syriam) just east of Yangon, in late 16th early 17th Century. Whereas the latter attempted to turn Lower Burma into a Portuguese territory, White was concerned only with filling his own coffers, riding roughshod over all those he came across.

In November 1683 he had been appointed the shahbandar, ‘King of the Haven’, by the Siamese government. Despotic, selfish and conniving, White made a lot of money but also a lot of enemies, none more so than the East India Company (then commonly referred to without irony as the ‘Honourable Company’) who termed him a “very ill man and a great Interloper and a great Enemy of the Kingdom in general.”

Eventually, when support from Siam began to wane, White slipped back to England with a ship full of heaving chests of treasure. Fortuitously, White arrived home just as the law was changed to allow him and all those like him the same rights as the ‘Honourable Company’ to “trade” in the East Indies, legally validating all that White had got up to abroad.

As Norman Lewis writes in his book Golden Earth: ‘The difference between common piracy and empire building is a matter of scale and success. If White could have held on to Mergui and facilitated its ultimate annexation to the British crown he would have been an empire-builder.’

White’s wife never returned home but died in Myeik, her grave becoming a popular pilgrimage spot for historically-sensitive tourists. Perhaps understandably, the locals had little interest in preserving the grave of the fierce wife of repugnant White. A few years ago it was still possible to visit the grave just behind a betel-nut stand, however today nothing of it remains at all after the paving of a new road. 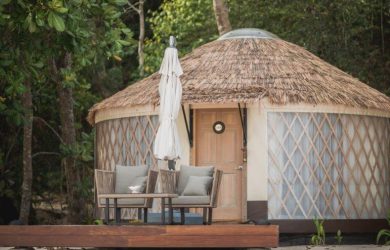 A chic resort is situated on the northernmost beach of Pila Island in the Mergui Archipelago. 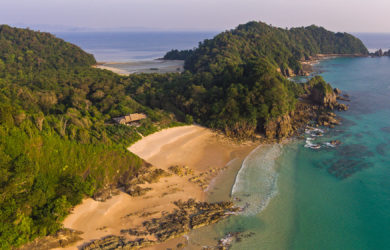 Barefoot luxury in the heart of the Mergui Archipelago.

Situated on an island on the eastern outskirts of the Mergui Archipelago. 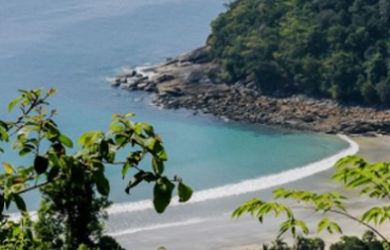 The Paradise Beach Bungalows are situated on a serene, hidden bay of the Dawei peninsula.