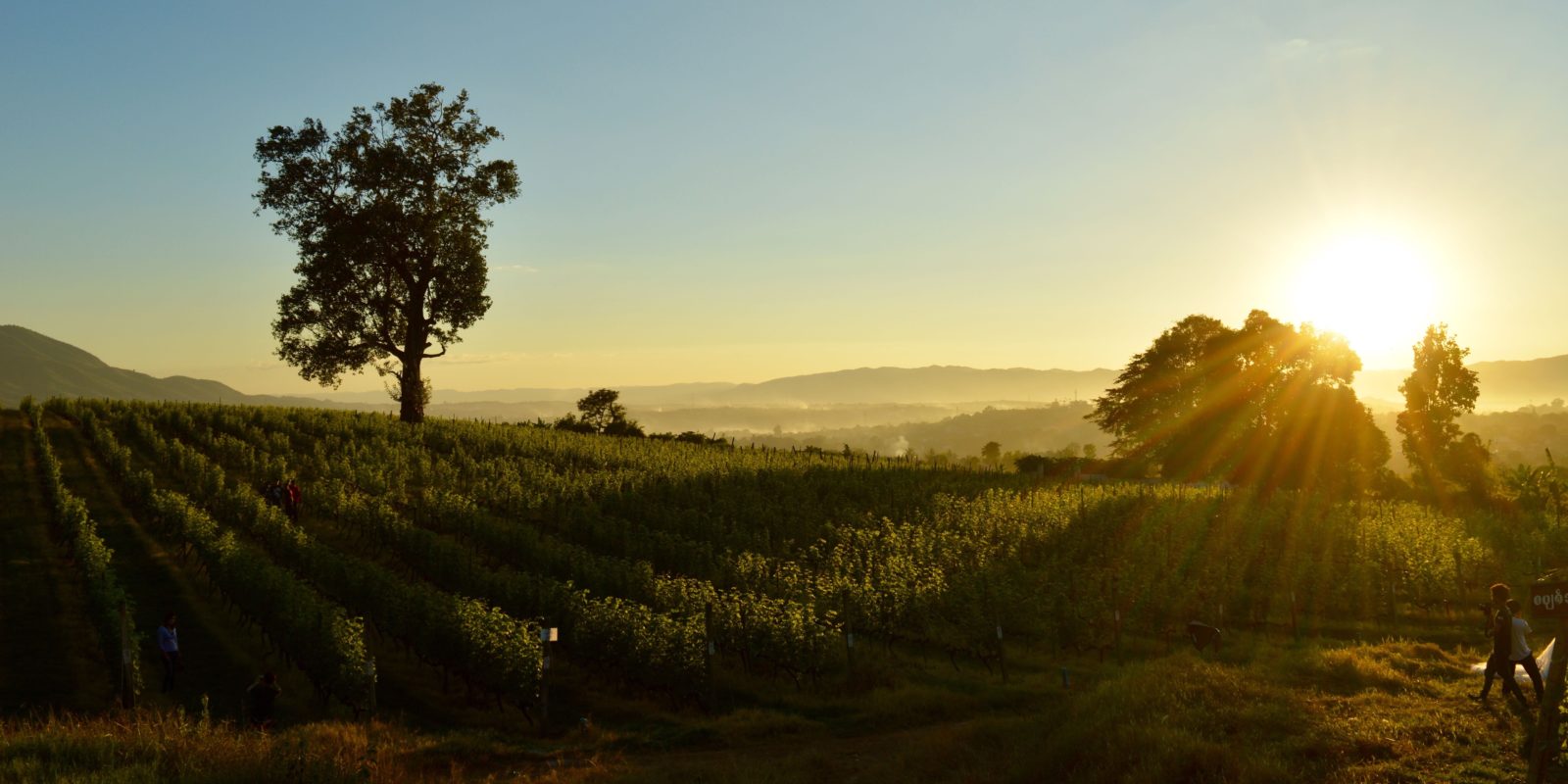 One of the highest cities in Myanmar, Taunggyi was founded by the British as a hill station, allowing them to escape the ‘prickly heat’ that plagued them at Inle Lake.

Two roads wind their way around the mountain, one serving upwards traffic, the other downwards. Peppered with cherry blossom trees and the yellow and purple Sain Ban bloomlets that brighten the streets when in season, as the capital of Shan State and with a population of approximately 200, 000, Taunggyi city is the bustling hub of the region.

Today, there are few give-away signs of the former British rule save for a handful of grand wooden houses and St Joseph’s Cathedral. The Ham Su Pagoda just across a humble football pitch can be visited after exhausting the stalls of the Five Day Rotating Market opposite.

On the eastern side of Taunggyi you can walk up to the Ruby Cave and the Shwe Phone Pwint Pagoda that looks over the town. To the south is Taunggyi’s biggest pagoda, Sulamani, based on Ananda in Bagan.

Taunggyi is renown for the Tazaung-daing festival, where huge and ornately decorated hot air balloons are let off into the night and explored in a shower of fireworks. The Taunggyi Balloon Festival marks the end of Buddhist Lent and the retreat of the southwest monsoon over Myanmar.

It is a festival of lights similar to that of Thadingyut in October, though far more flamboyant, exhibiting the country’s scant regard for health and safety. Whereas Thadingyut can be marred by rain clouds, clear weather is guaranteed for the Tazaung-daing Festival.

Just down the hill from Taunggyi one can visit the Aythaya Vineyard, Myanmar’s first ever vineyard and wine distillery. The first 3, 000 vines were imported from Europe in 1998; a decade later the founders were ratified in their belief that wine capable of competing with the best of the West could be created in the moderate, high-altitude climate of Shan State.

Travellers  can taste the first ever Myanmar wine in the form of the winery’s four principal bottles, as well as embark upon a whistle-stop tour of the vineyard, most likely in the company of the owner’s amicable golden retriever.

As well as the wines, Aythaya also produces a tart but enjoyable ‘grappino’. Visitors can dine at the Sunset Wine Garden Restaurant, sample the Mongolian-style barbecue each Friday night and rent mountain bikes upon which to explore the region.

The Pa’O Villages around Taunggyi

Although today Taunggyi culture is heavily enthused with that of the Shan people as well as Chinese influences from across the eastern border, before the British came, the collection of huts that was then Taunggyi were predominantly inhabited by the Pa’O. After the Shan and the Palaung, the 500, 000 strong Pa’O ethnic group is the largest in Shan State, with others living in both Kayin and Kayah States. The Pa’O even have their own 6, 000 troop army, officers of which you will see tending to the central pagoda at Kakku and other religious sites in the region.

Upon entering southern Shan State you will quickly become familiar with the black clothes and fiery orange headdresses worn by the Pa’O women (and some of the men), as well as the brightly patterned Pa’O tote-bags that all in the region, Pa’O or not, carry slung over their torso. The villages surrounding Taunggyi remain heavily Pa’O and both day and overnight trips can easily be made to visit some of them.

In the large village of Naung Kai visitors can observe the villagers grow, pick, and prepare the large green leaves that are used to roll the iconic Burmese green cheroots. Wafts of the surprisingly fragrant smell of the singed leaves are emitted from every house during the wet season, when the business of preparing the leaves is at a frantic 24/7 fever pitch.

At this time families work all day and night on rotating shifts, picking the leaves, snipping off the stems, lightly roasting them and then sorting them into size and quality before packing them off to Taunggyi. Visitors are able to take part in the process when at the village.

Naung Kai is large but poor, and their well, serviced by mountain streams, runs dry in the weeks before the wet season when the red earth begins to crack. The villagers eat very little meat but a lot of the rather tasteless golden bean sweetcorn; a bowl of which you will likely be offered when visiting. The ornate – if slightly gaudy – monastery at the centre of the village might lead one to believe that Naung Kai is in fact reasonably wealthy. In truth, it is actually testament to the claim that the Pa’O are the most generous Buddhists in the country.

A short drive from Naung Kai is the larger and better-off village of Chaung Po. Here there is a large mountain spring at the bottom of the village where the water is pooled into two separate bathing booths for the men and women. If staying overnight, hardy visitors can join the villagers here at their morning ablutions.

One can also walk up to the Chaung Po Pagoda on top of a steep hillock. The first level is reached by a well-paved set of stairs rising up from the centre of the town. Here there is a small monastery as well as a Standing Buddha looking down upon the village with a larger monastery directly below, the courtyard visible as well as perhaps a lone novice circling about on an oversized bicycle.

One can then traverse up a further set of stairs atop of which one will find no well-tiled terrace and polished stupa, but instead, a sharp corner and open doorway turning around upon a small rocky mound with a slightly lopsided zedi set amongst brambles and rubble. Though the pinnacle is slightly anticlimactic, one can sit in the groove of one of the arched open doorways, feet resting on the rocky crust of the hill, look over the village and the undulating landscape beyond, and perhaps even add to the collection of contemplative cheroot butts.

In both Naung Kai and Chaung Po, if you have already spent some time in Myanmar, you might be left quizzical at the tranquility. Puzzled as to what it is that is missing from the soundscape, you may eventually realise that it is the absence of the dogs that bark and trot about around almost every other stretch of the country.

The Pa’O are known to have no time for dogs, finding them dirty, noisy and altogether a nuisance that can be done without. In place of canines, they prefer cats, or, better yet, babies. When hearing of the affection, time and money spent on pet dogs in the West, Sampan’s Pa’O host sniffed at us: ‘Why get a dog? Better to have a baby.’

The Pa’O mythology tells of a handsome druid who was seduced by a lady he saw bathing in a lake. Despite his many talents, the druid was unable to see through the women’s guise and did not deduce that she was actually no women but a naga, a snake-like dragon able to take human form at will. After having spent the night with the beautiful stranger, in the morning the druid’s suspicions were finally aroused by the harsh and slightly scaly texture of his bed fellow’s skin. On the pretext of fetching water, he slipped out of the house and stealthily observed his new friend from a vantage point in the garden.

The naga, thinking she was unobserved, began scampering around the room, gobbling up the spiders and lizards that she so craved for breakfast. The truth was out! After confronting and damning the distraught naga, the druid left the region forever. In a twist worthy of a telenovela, months later the naga laid not one but two large eggs. Out of the first hatched a strong and healthy baby, who was to be the first of the Karen (Kayin) people.

The shell of the second egg showed signs of a struggle within but it was only with the assistance from the attendant mother that the second baby broke free of the shell. The name “Pa’O” comes from their word that means to be assisted in breaking out of something. Today, the Pa’O women continue to wear the fiery headdresses in memory of their mother.

Despite their role in the Pa’O mythology, the Karen themselves have a slightly different story of their own conception …

Formerly, all Karen believed in a divine power by the name of Y’wa, who created the world as well as the first man and woman. Y’wa was assisted, then later hindered by the serpent deity Mü Kaw Li, who taught the Karen their culture. Y’wa is said to have given the Karen a book – ie. the gift of literacy – which they then lost. Long awaiting the promised rediscovery of this book, when Baptist preaches clutching the Bible arrived in Burma from Boston speaking of Ya’weh and the serpent in the Garden of Eden, the Karen were naturally some of the easiest converts to Christianity any missionary has ever come across.

The missionaries also assisted the Karen is creating a defined script out of the Karen dialects. In this way, you could say, the Karen had their book of literacy returned.