Passing through in the 1920s, Somerset Maugham wrote that wise men kept away from Mandalay believing that the city would never be able to live up to the ‘independent magic’ aroused by its name’s lilting syllables.

Indeed, Mandalay lacks the vibrancy of Yangon and the splendid beauty of Bagan and Inle Lake, which sometimes means it receives a bad rap from visitors.

However the wide and dusty streets, pious architecture, and culturally-sensitive, liberal locals imbue this city with a heady charm and those prepared to delve below the surface will find in Mandalay delights absent from the country’s other cities.

The U Bein Bridge, Amarapura

The Melbourne of Myanmar

Although Mandalay is the former royal capital of Myanmar, today it is neither the administrative nor the commercial centre of the country.

It is however, Myanmar’s kernel of culture.

Seen by some as the ‘Melbourne of Myanmar’, as Rough Guides puts it, Mandalay has ‘a cultural and historical lustre compared to which Yangon is a mere colonial upstart, and Nay Pyi Daw a deranged military fantasy.’

Due to the religious fervour of King Mindon, Mandalay is a hub of Buddhism. There are over 1, 000 monasteries in Mandalay – housing roughly 100, 000 monks and novices – including two of the largest monasteries in the country, Mahagandayon and Masoeyen.

Travellers to Mandalay can visit a selection of intriguing pagodas including the ornate Mahamuni Pagoda, often referred to as ‘the Shwedagon of Mandalay’, King Mindon’s private quarters Shwenandaw Monastery, as well as Kuthadow Pagoda, dubbed the ‘World’s Biggest Book’, due to the 730 marble tablets inscribed on both sides with dense Pali, comprising the Theravada Buddhism canon in its entirety.

Some visitors to Mandalay describe it as a large, sprawling village. There appears to be an infinite amount more tea-shops and beer stations than offices and high rises, and the empty roads are invaded by little boys to be used for hysterical football practice from 9PM onwards.

Along the banks of the Ayeyarwaddy River the city is quickly superseded by rurality, and a stray foal holding up the traffic on one of the central streets is not out of the ordinary. The surrounding villages are green and spacious allowing those visiting Mandalay to embark upon airy and invigorating bicycle rides.

One of the top things to do in Mandalay is taking a morning stroll around the central moat or, indeed, making use of the various fitness apparatus peppered on its banks looking upon the royal compound.

That said, at rush hour the roads can fill with erratic motorcyclists. Those visiting Mandalay will witness whole families impossibly and indifferently balancing on motorbikes, granny clinging on to her young grandson manning the vehicle, while docile babies are slung under an arm or nonchalantly totter upon a protruding knee.

I always find it impossible to say the name ‘Mandalay’ out loud without having at least a small flutter of excitement. For many foreigners it conjures up irresistible images of lost oriental kingdoms and tropical splendour. The unofficial Poet Laureate of British colonialism, Rudyard Kipling, is partly responsible for this, through his well-loved poem ‘Mandalay’. But the name also tugs at Burmese heartstrings. The city was the seat of power in Burma, and it was there that the last Burmese monarch, King Thibaw, reigned.

Largely due to Kipling, Mandalay, Burma’s last Royal City, is often assumed to be an old romantic city of an ancient Burmese kingdom. However in actual fact Mandalay is a relatively new metropolis, having been built the same year that Macy’s department store first opened its doors to customers in Manhattan.

In the 18th Century the site of Mandalay was nothing but swampy paddy land and rank jungle. The city was created out of a small settlement by King Mindon in 1857 to be the new capital of the Konbaung Dynasty.

The Royal Palace and moat at the heart of the city was also the seat of power of Mindon’s son Thibaw, the last king of Burma. In fact, from his coronation to the day he was deposed by the British, from fear of usurpation, not once did the young King Thibaw leave the palace complex.

Sadly for the city, since the fall of the last Burmese Kingdom in 1885, Mandalay has never quite regained its grandeur or opulence. Sir George Scott, a colonial administrator, was one Brit who mourned the loss of the old Mandalay when it was annexed by the British:

“The pigs have all been eaten up and the pariah dogs poisoned by municipal order; A, B, and C roads testify to the unromantic stolidity of the Military Intelligence Department; electric trams make it easier for the Burman to move to the suburbs and leave the town to the hustling foreigner. There are no agreeable scallywags. The Palace, instead of being tawdrily magnificent, smells horribly of bats.”

Mandalay and its citizens were further ground into the mud through Allied bombing raids against the occupying Japanese in the Second World War. The Japanese military, like the British before them and the Burmese military post-independence, took up residence in the Royal Palace complex, and this led to almost the entire wooden compound falling victim to heavy shelling.

As one onlooker wrote upon wandering the streets once the Japanese had retreated,

‘Mandalay, that proud city, once the capital of the Kingdom of Ava, steeped in tradition, now lay a heap of smouldering ruins … Every temple had gone, the bazars and the shops had gone, and the homes of 150, 000 people; Mandalay itself had gone.’

Despite all of this, we still love the city. It is one of our favourite places to visit and there is plenty to see and do in Mandalay.

Like much of Myanmar, Mandalay is a vibrant mix of ethnicity. Though predominantly Bamar, there is a large population of Shan and Karen, as well as Chinese, both recent migrants and the descendants of those who immigrated to Burma during colonial-rule. Influence from China can be observed at the fervent jade market. This is a world in itself and can be slightly unnerving to the unsuspecting visitor.

Pushing your way through the throng you will pass shrewd, betel-spitting buyers inspecting the quality of the jade with a magnifying glass; young boys operate the whizzing cutting machines while their older brothers power the slippery polishers, green cheroots hanging lazily from between their lips, while in dim corners, podgy, fanny-pack-clad and bespectacled Chinese treasure-hunters compare notes.

Mandalay is Myanmar’s city of crafts, and during your trip you can delve into the wood carving quarter, the stone carving quarter, weaving workshops, and those of blacksmiths fashioning gongs. Mandalay is also the best place in Myanmar to witness traditional performing arts, such as puppetry, music, dance, and even the antiquated ayeint comedy sketches.

The Burmese spoken in Mandalay is said to be the most beautiful in the country, and the women have the curious tendency of using the male first-person pronoun ‘cănaw’ instead of ‘cămá’, used by Burmese women in the rest of the country.

Against this slightly recalcitrant anomalie, students in Mandalay have been particularly vocal over the last few years in the demand for greater freedom and democracy. In 2014, one of the largest student movements against a new National Education Law that was perceived as undemocratic began in Mandalay, and the students of the city have since been steadfast in their demand for the release of their peers who were imprisoned following the protests.

The mix of traditional arts and crafts with the fiery, liberal streak leads many to regard Mandalay as culturally richer than Yangon, and all together a more punchy metropolis.

See more of Mandalay on our Pinterest board here. 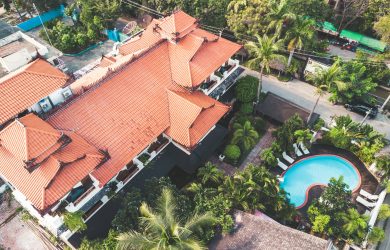 Hotel by the Red Canal

Everything in delectable miniature from the pool, to the spa to the salt & pepper shakers. 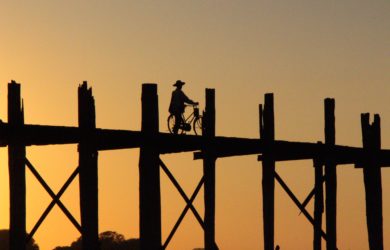 The spillage of empires has been mopped up. Mandalay remains Myanmar’s cultural capital. 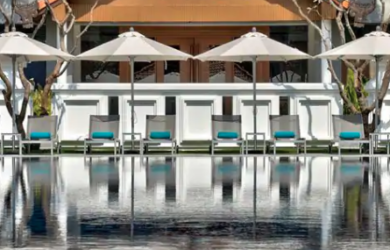 With Hilton efficiency, at the corner of the moat looking upon the Palace.