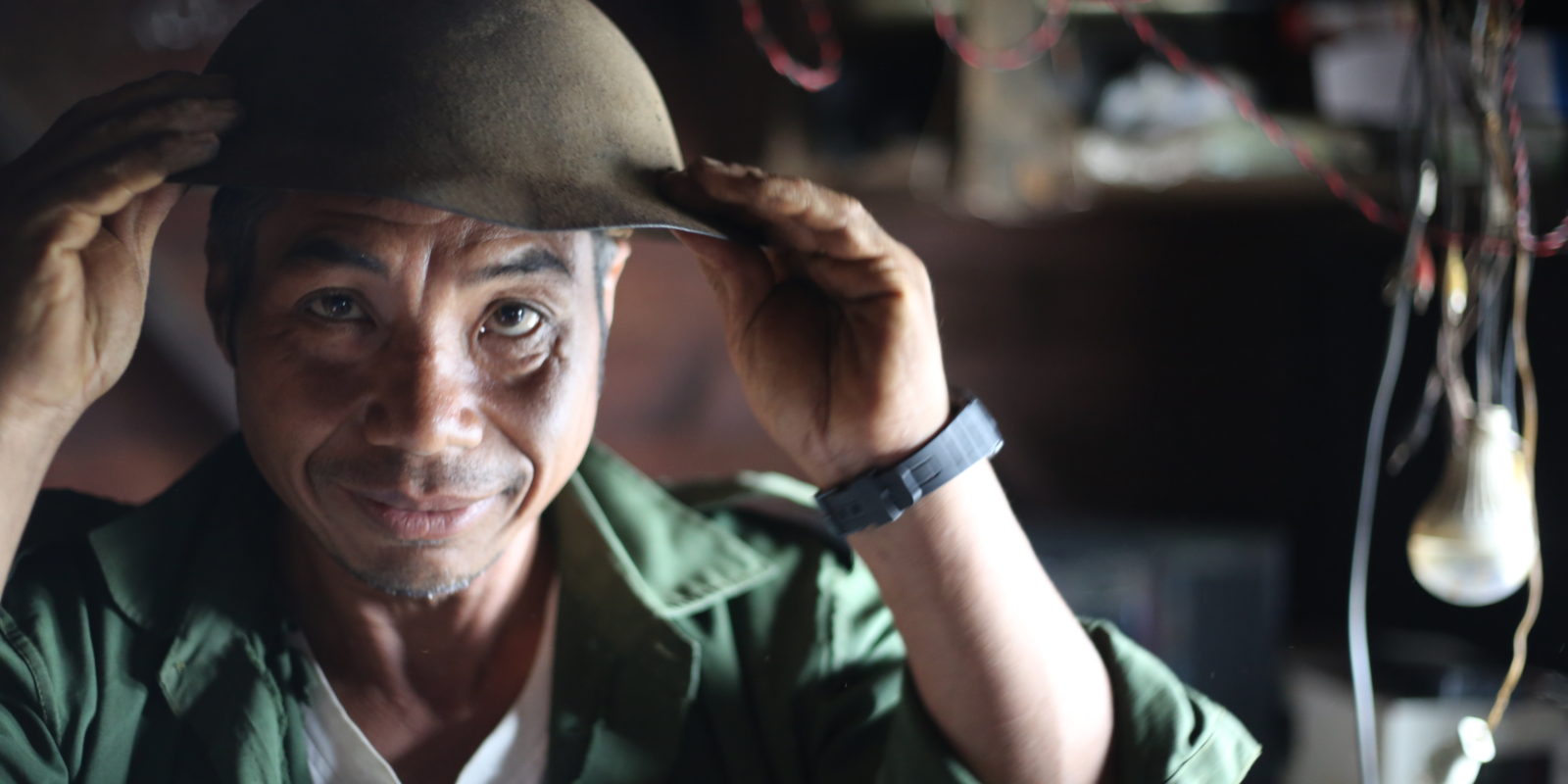 Alex Bescoby of Grammar Productions introduces the documentary Forgotten Allies, seeking out veterans in Myanmar who fought beside the British in the Second World War and were subsequently forgotten post Burmese independence.

“What would have happened if the Japanese had caught you?”

“They’d have peeled off my skin and poured salt underneath. Like they did to the others.”

The stunned silence is only broken by Liau Chang’s laughter. Even at 93, this former scout in the British Army has that roguish spark of the fearless teenager whose stories he’s retelling more than seventy years on.

Sally McLean, founder of Help for Forgotten Allies (H4FA) and poser of the question takes a moment to process. It’s stories just like this that she and her fellow trustee Peter Mitchell, sat beside her, have heard many times on their annual tours across Myanmar.

Here on their second visit up to Hakha in Chin State, one of the country’s most remote corners, they’re working tirelessly to track down men like Liau Chang. With every year that passes their mission becomes harder and harder, their meetings fewer and fewer.

But why do two people in the later years of their own lives travel thousands of miles from the UK, year after year?

It was that question that had brought the Grammar Productions team to this distant part of Southeast Asia, not far from the Himalayas. We’ve spent years exploring the shared history of Britain and Myanmar through film. Alongside H4FA we were now diving deep into one of our shared story’s most traumatic chapters for our latest documentary project – Forgotten Allies.

On first meeting the H4FA team back in the UK two years ago, I’d instantly been struck by the sense of devotion to a cause that Sally had started twenty years earlier after a chance meeting in a refugee camp on the Thai-Myanmar border had changed her life.

“Aged 87, Saw Yoshoo (Joshua) was recruited into the British Army’s Burma Rifles regiment in 1934. Still perfectly lucid, he reeled off his name, rank, number and the name of his commanding officer. When I asked him what he would like me to do for him, he replied that I should ‘inform [his] officers’. His own poverty – one pair of trousers, no medication for his asthma – was clearly secondary,” explained Sally.

After that encounter, Sally founded H4FA to track down other men like Saw Joshua, who had risked their lives fighting for another king and country during World War Two. Their mission? To recognise and reward these men, many now living in hardship across Myanmar and Thailand, before it’s too late.

Through private fundraising back in the UK and relentless work from the volunteers who make up the H4FA team, the charity is providing life-changing welfare grants and medical support to hundreds of veterans and their families. While similar campaigns to support the enormous contribution made by Gurkha regiments have had national profile with A-list support, the work of H4FA has long been under the radar.

Thousands of men from Burma (now Myanmar) fought for Britain in a brutal war against the Japanese, who invaded and occupied the country from 1942-5. They played an integral role in the war’s turning-point battles of Imphal and Kohima in 1944, and throughout the Japanese occupation took part in resistance movements in the Thai-Burma border areas. A huge number were killed, wounded and – if captured – subjected to horrific tortures.

“It was the most successful guerrilla campaign of the Second World War, the greatest defeat the Japanese army had ever suffered in its entire history,” said Philip Davies, author of Lost Warriors: Seagrim and Pagani of Burma, when we interviewed him for the film.

After the Allied victory in Burma, the country secured its independence from Britain. Unlike other former colonies and dominions, Burma’s new government decided not to join the Commonwealth. Decades of war, dictatorship and international isolation would further sever the ties between Britain and Myanmar’s ex-combatants that were preserved across the Commonwealth by the Royal Commonwealth Ex-Services League.

“They stood by us and fought by our side against the Japanese. At the end of the war we walked away from Burma and washed our hands of it. The whole Burma campaign was seen as a sort of forgotten sideshow, and disappeared behind this bamboo curtain. The veterans who fought and died for the British were completely forgotten,” explained Davies.

‘Forgotten’ is a word you can’t avoid if you choose to take a closer look at this traumatic chapter of world history.

The “Forgotten Army” – as the British Fourteenth Army responsible for retaking Burma has come to be known – was the largest army in the world at the time, a multinational force of roughly half a million volunteers drawn from across the Commonwealth.

Brits who had fought and survived the bloodbath of the D-Day landings soon found themselves fighting alongside soldiers from across the globe as they battled the Japanese in the mountains and jungles of Burma. Even men from as far away as east and west Africa were moved halfway around the world to join the fight.

The more I discovered, the more I couldn’t help but be amazed that this story was so little known back in the UK. Given the sheer scale of the conflict, I was troubled by how little focus the Burma campaign is given in annual commemorations of World War Two back at home.

Here in Myanmar, it’s a conflict that’s sadly impossible to forget. The legacy of the ‘Japan War’, as it’s known to many, is still reverberating all around us. When the war ended in 1945, Burma was left traumatised and divided, and in many ways has still yet to recover. Its major cities were in ruins, its fragile institutions in tatters, and its people divided by which of the imperial powers they had chosen to back in a zero-sum fight to the death.

Awash with weapons, those divisions would quickly erupt into deadly internal conflict. As early as 1949, just one year after Burma’s independence, Karen soldiers took up arms against the Burmese government, starting a conflict that has come to be known as the world’s longest civil war. The ripples of World War Two can even be felt in the unfolding crisis in Rakhine, with some describing it as unfinished business from World War Two. While the war in Europe may have ended in 1945, the war in Myanmar is still going on.

Which is why the team at Grammar Productions felt that the time was right to do our bit to share this story to the world, before it was too late. We’re passionate about lesser-known tales from the past that help us to better understand the world we live in today, and the story of the Forgotten Allies is exactly that.

While blockbuster dramas like this summer’s ‘Dunkirk’ are a powerful way to teach new generations about the story of World War Two, we believe that documentary must also play its part – particularly in these last few years when those who lived it are still here to tell it first-hand.

Meeting these men and women has been the greatest privilege of being part of the Forgotten Allies project. They are the last whispers of a story that cannot, and must not be lost.

Even though I’ve been immersed in Myanmar’s history for the last ten years, this project has moved me more than I could have imagined. As we’ve travelled across the country, I’ve been repeatedly humbled by accounts of bravery and self-sacrifice in the face of mortal peril.

Whether climbing through the mist-covered Chin hills, or trekking through the jungles of reclusive Kayah, at every turn I could feel the trepidation of those British soldiers almost half my age fighting here. They must have felt as if they had arrived on a different planet. In many ways the only comfort and hope for survival was the friendship and guidance of the men and women whose stories we were here to record.

“Our key objective, in the last days of these soldiers lives, is to do everything we can to give these men the feeling that they are being acknowledged for what they did, and that they’re being remembered,” Peter Mitchell, one of H4FA’s trustees, told us.

Together, we can keep the spirit of the Kohima epitaph alive for a little while longer:

“When you go home tell them of us and say: ‘For your tomorrow, we gave our today.’”

Grammar Productions and H4FA would like to thank the team at Sampan Travel – the logistical partner for Forgotten Allies – without whom this project would not be possible.

A trailer for Forgotten Allies can be watched here.

Alex Bescoby
Alex Bescoby is the co-founder of Grammar Productions and Director of the documentary Forgotten Allies.