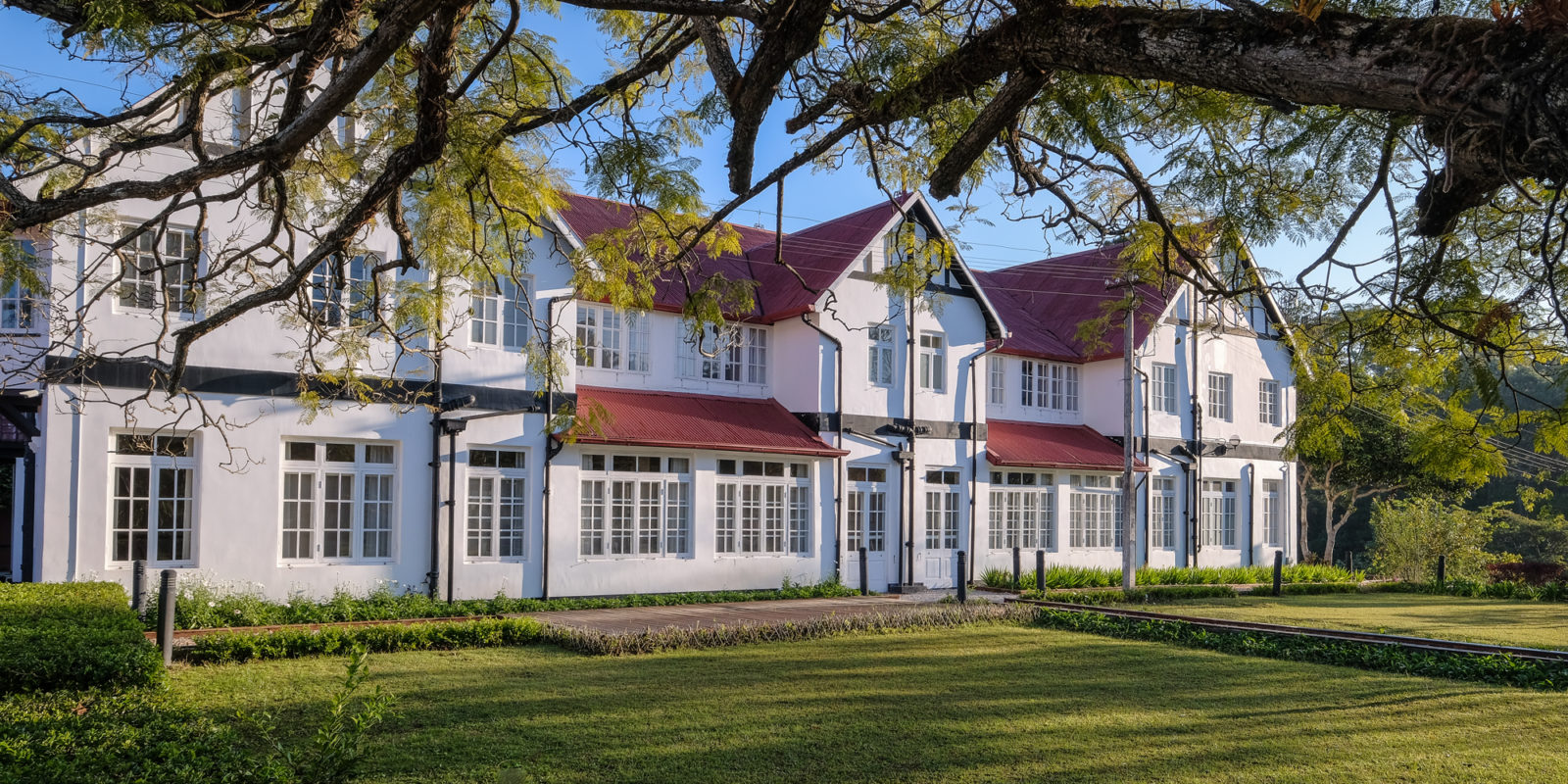 Myanmar is best in the morning. And the mornings are best in Kalaw. A bold statement, but one difficult to deny when you wake at the crack of dawn, jump onto a bicycle and head through the town southwest towards the village of Myin Daik.

The road will be quiet: you, the monks and a few wolfish dogs snuffling in the hedgerow. The inclines are gentle and the asphalt is smooth; the air is clean and the light angelic when shining through the mist into a tranquil copse.  We recommend turning a sharp right just before reaching Myin Daik and entering the train station. There is a small tea shop here where you can sit and sip tea amongst the hanging clothes and toys of the proprietor’s family. It is a sleepy station, but if you are very lucky, you may see the arrival of a train.

For the sybaritic traveller, the hotel breakfast in Kalaw can be equally enjoyable. Hillock Villa offers their guests a feast for breakfast including fresh Shan noodles and soft banana bread. Their mixed fruit salad and yoghurt is particularly good. Kalaw Vista bake their own bread alongside local jam and New Simple Life present a different dish every morning.

Alternatively, we recommend hin thoke at the central market: a bundle of steamed and sticky rice with chicken or pork and a smattering of spring onions and chili neatly wrapped in banana leaves. Also in the central market are an assortment of noodle shops. The best are bunched together at the western side, and the best of this bunch is called Kanbawza. The sign board is written in Burmese, but it is the one highest up with stalls surrounding the central kitchen space.

Breakfast or not, one of the nicest things to do in Kalaw is visit the market when the five-day rotating market is in town and the stalls spill out onto the surrounding streets with fruit, vegetables and the colourful Shan tote bags popular throughout the country. As with all of the five-day rotating markets of Shan State, the one in Kalaw is a fantastic opportunity to rub shoulders with a variety of the diverse ethnic groups that populate the region. Look out for the fiery orange head-dresses of the Pa’O and the rings the Palaung women wear around their waists.

The costumes of the ethnic groups of Shan State such as the Pa’O and the Palaung reminded the British author and administrator Sir George Scott of a “wind-stirred tulip beds or a stir about of rainbows.”

The diverse ethnic groups of Burma were always of great interest to British scholars however it was with the aim to bring the Shan people securely into the British Empire that first brought the colonialists to Kalaw. After the fall of Mandalay in 1885, through a certain amount of coercion and cajoling, all the sabwas (the Shan princes) eventually came to accept British rule. The imperialists set about establishing hill stations throughout the temperate Shan State. The jungle was fought back and subdued and Kalaw, like other small Shan towns, was transformed into, as the author Andrew Marshall puts it, “a hot -season retreat, where pretty bungalows nestled among cool pine forests and the water was so pure that every month the train carried a great supply back down to the Governor in Rangoon.”

Much of the colonial heritage of Kalaw remains intact, attracting like a moth to a flame both international and local travellers. Making a walking tour of colonial Kalaw, either with a guide or by yourself, perhaps the best way to spend a morning in the town.

One place to start is the central railway station. The station is still in mint condition and looks like it has been plucked straight out of a story by Nesbit or Blyton. However instead of ruddy-faced station masters and caucasian scamps with ringlets, the quiet station at Kalaw is for most hours of the day attended by little more than large sacks of produce, waiting stoically in a pile on the platform for the daily train to Shwe Nyaung.

Not far from the station, up the Tekkatho Road, is the Christ the King Church. It is worth trying to visit when a service is taking place, so as to witness Kalaw’s small but hearty congregation belting out lessons with the same gusto that Burmese school children learn English by writ. Next to the church is a military training camp outside at the gates of which will usually be a young and surly soldier, sullenly tracking your movements.

Next to the church is a military training camp outside at the gates of which will usually be a young and surly soldier, sullenly tracking your movements.

Near to Christ the King is Kalaw Heritage Hotel, Myanmar’s oldest hotel after The Strand in Yangon. Time it right and you can have lunch at Kalaw Heritage. We recommend beef salad (with a spicy kick), Mandalay chicken kebab (tasty and tender) and mutton and potato samosas (double-wrapped for extra crunch!))

Further out of town, but still in walking distance, is the Rock House, unmissable with the image of two white fish on the property’s green gates, and the house of Mrs Childers, an indominable former resident of Kalaw. When most of the town evacuated to India as the Japanese entered Burma during the Second World War, Mrs Childers remained, hiding for several months with the nuns in the St Agnes Convent before being discovered by the Japanese and sent to an internment camp in Dawei.

Mrs Childers was already a widow. She and her husband Lt-Col Hugh Francis Eardley Childers had lived in an elegant house in Kalaw and were known to keep social standards high. In the evening he always wore a dinner jacket and she an evening gown and gloves. Mrs Childers returned to Kalaw after WW2 where she would entertain young ladies from the convent with cucumber sandwiches and tea from a silver pot. She couldn’t speak a word of Burmese and would insist that: “If you are not understood in English, you shout.”

For those travelling to Kalaw keen to journey further: treks can be made to Inle, the best of which are via the Pa’O villages around Aung Ban. Shorter treks can be made to Palaung villages beyond Myinka, just north of Kalaw. And if you opt for this, we recommend taking lunch at the glorious Myinka Trek Ecolodge. (You can read more about the owners of the ecolodge here.)

Birdwatching can be done near to the Kalaw reservoir and elephants can be visited at Green Hill Valley. This camp has been set up to look after elephants retired from the timber industry and is a shining beacon of how elephant camps should be. There is no circus trickery or tomfoolery but instead the elephants are allowed to simply be elephants while the guests feed them copious amount of pumpkin which – in our opinion – is just as fun as any ride.

If tiring at this point, visitors to Kalaw are recommended to try a cup of the local Shan coffee which is not only momentously better than the three-in-one coffee mix so popular with the Burmese but it is also less grainy than that from Chin State and not so bitter as that of the Karen. Look out for Genius Coffee from Ywangan and Behind the Leaf from Pinlaung. Both Kalaw Café and Sprouting Seeds serve good coffee – the latter also offers the best ice cream in town.

The more daring traveller may wish to take their coffee with a quid of betel, the nut from the areca palm known as ‘gon yah’ in Burmese. Betel is said to deliver a buzz equivalent to up to six cups of coffee and is chewed and spat with great fervour throughout the country. The inexperienced usually struggle to keep the lump together in the side of their mouth leading to dribbles of blood-red droplets and splinters of nut. Betel’s carcinogenic properties and the unsightly effect continuous use has on the teeth does not endear it to many tourists. However, the Kalaw ‘gon yah’ is said to be the most favourable to a Western palate, due to the addition of green papaya and coconut and the practice of slightly roasting the nut itself.

A night in Kalaw

Kalaw manages to strike a balance between captivating bustle and provincial tranquillity and for this reason losing oneself along its streets is one of the nicest things to do in Kalaw during the last few hours of sunlight. Travllers are greeted cheerily and with excitement by most of the inhabitants, whether it be children wobbling past on oversized bicycles or old men in teashops sitting amongst the fuzzy hubbub of the Premier League.

The town is bordered by a ring of pine trees and acting as a navigating point at the northern end of Kalaw rises the grand Thein Taung Pagoda. Those with energy left may wish to climb Thein Taung and from the monastery at the top, in the company of meandering canines and monks hanging up their washing, watch the sun set over Kalaw.

Kalaw boasts one of the finest selections of Indian restaurants in Myanmar, the owners being descendants of the rail workers encouraged to emigrate by the British. We recommend one of these for dinner. While Morning Star is ideal for Indian sweets and chapatti for breakfast, in the evening we recommend either the north Indian restaurant Yadanar Talkie House converted from a colonial cinema (go for the vindaloo) or the Nepalese restaurant Everest (we recommend the paneer masala and the momos – the latter need to be ordered a day in advance).

There is not much of a nightlife scene in Kalaw but bars such as Hi Bar indicate that things are changing. Slightly ungenerously, Lonely Planet describes it as the “size of a closet”. Indeed, it is not big. Guests will be rubbing shoulders with whoever your fellow punters are that evening. The popularity of the bar has meant that the speakeasy vibe is over and there are now chairs and tables outside for the overflowing guests; the drinks are few and simple; the waiter who performs magic is no longer there.

An alternative option is Heritage 21 just next to the Italian restaurant The Red House. It may look empty, but go down the stairs and you are likely to find an assortment of hip young things, sipping on rum sours, munching upon BBQ’d meat and singing along to the strums of Burmese love ballads.

It is a friendly vibe which ends surprisingly quickly around 9PM. It is early nights in Kalaw. All the better for those morning cycle rides.