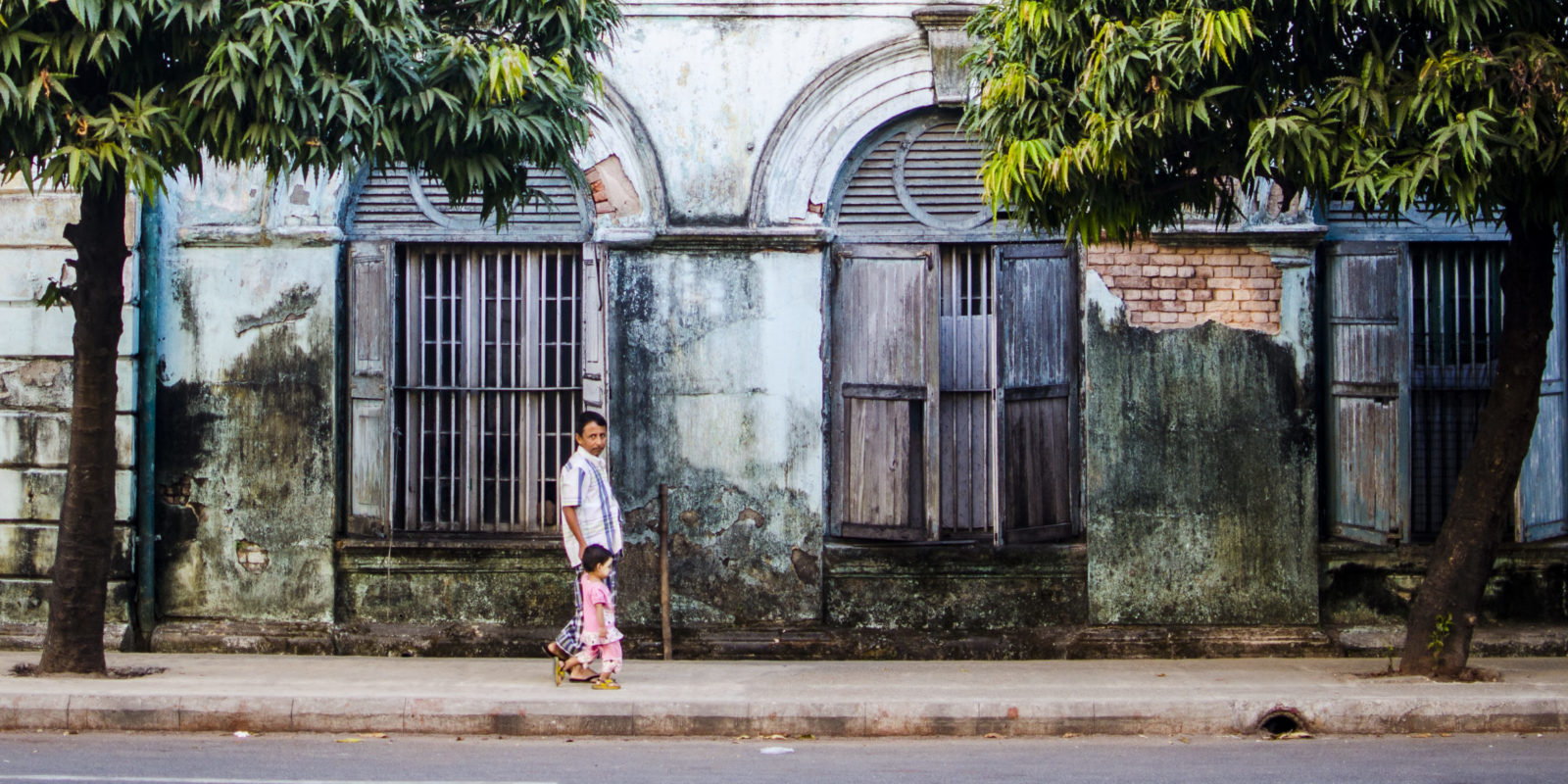 Many visitors to Myanmar will say that one day in Yangon is enough. ‘More than enough,’ the least generous may stress. The former capital of the country is often regarded in the same light at Columbo or Guatemala City: the gateway into a glorious country, but not a place one wants to linger for long.

Yangon has changed much over the last five years. Where there has come welcome development – smoother roads, cleaner streets and a smattering of functioning ATMs – there has also arrived more traffic and more noise and a foreign face is no longer a charming novelty. However Yangon remains the beating heart of the country. Amongst the grand remnants of a dramatic history, Yangon is stepping boldly into the modern world and its eclectic mix of citizens hailing from far and wide make for a charged atmosphere and offer more than enough for the discerning visitor to experience and explore.

However if you are insistent on only remaining in Yangon for a day, here we have suggested one possible 24-hour itinerary to get the best taste of the city.

Amongst the grand remnants of a dramatic history, Yangon is stepping boldly into the modern world and its eclectic mix of citizens hailing from far and wide make for a charged atmosphere and offer more than enough for the discerning visitor to experience and explore.

Let us imagine that your arrival in Yangon is the crowning finale of a river cruise down the Ayeyarwaddy River. Like the British colonialists over 150 years ago, you will arrive on the banks of the Yangon River at Pansodan Jetty in downtown Yangon. Instead of the reeking, ramshackle town of wood and bamboo that welcomed the British, you will be greeted with an imperial skyline, made-up of the neo-classical Myawaddy Bank, the red-brick customs house with its still-functioning two-faced bracketed clock hanging upon the white tower, and the grand Port Authority with its striking square centerpiece and facade of sculptured ship impressions.

You will need to keep your eyes at ground level however, for upon leaving the jetty you will be immersed in one of Yangon’s many street markets. An array of colour assaults: rambutan, durian and papaya alongside bananas of all shapes, green-peel oranges and yellow-flesh watermelon.

Dive right into Chinatown, Yangon’s frantic, rollocking heart at dawn, where grills are operating at full-flame and hawkers at maximum volume. There is no time to balk, as the sights and smells of the morning markets will have evaporated by 8AM.

Amidst the hive of activity seek out breakfast by approaching a street vendor for a pouch of fried samosa or falafel or the piping hot fruit-and-nut scotch pancakes. Alternatively, sit yourself down at a Yangon teahouse – identifiable by the brightly coloured plastic tables that tumble out onto the streets – and order a bowl of mohinga, the traditional Burmese breakfast of rice-noodle soup with egg, ginger and crushed chickpeas.

You will most likely be waited on by the perspiring proprietor, white t-shirt stretched over a protruding belly, hands busily drying themselves furiously on a grubby longyi. If he is otherwise engaged, your waiters will be bright-eyed young boys in Chelsea football shirts. A cheery ‘mingalabar!’ will have wary faces break into smiles and an order in Burmese of coffee (goh-pee), tea (la-pai-ye), or bottled water (ye-than) will have them readily chuckling at your first gutsy attempts at Burmese.

With your ‘British tea’ (extra milk, extra sweet, extra strong!) sit back amongst the old boys reading the morning papers and regard Yangon at its most affable; noodle-carts weaving in and out of lines of monks, dogs snoozing in the shade, and little nuns in pink singing on the pavement.

Don’t linger too long at the tea house. You only have one day after all and there is enough in each and every street of downtown Yangon to fill out an afternoon. Pay your bill and leave a little tip (they will be expecting it, despite their abashed faces) and submerge yourself in the throng.

Yangon has the finest array of colonial architecture in Myanmar, the best of which is around Mahabandoola Garden. At the centre of this square park is the Independence Monument – which replaced an imposing statue of Queen Victoria – rising high above the manicured hedgerow like a giant cocktail stick.

The park will be peppered with students pouring over books and young couples sharing clandestine moments behind colourful parasols. To the east of the grand, lilac City Hall is the former immigration department, once the Rowe & Co. Department Store – dubbed the ‘Harrods of the East’ – and now a branch of Aya Bank. Facing the bank is the Immanuel Baptist Church, where Yangon’s small but hearty Christian community belt out sermons in Burmese, Shan, Chin and a handful of other languages.

While admiring the architecture, be sure to keep an eye on where your feet are stepping. In Yangon pavements open up into gaping holes alarmingly often. Lottery carts, trishaws, and hawkers peddling posters of Buddha and cigarettes straddle the pavement and just when you think the way is safe to put a bold step forward you will find yourself narrowly avoiding trampling upon a trouser-less toddler squatting on the floor.

On the corner where Merchant’s Street meets 37th Street, you will find Yangon’s ‘open air library’, where there is an array of books on sale for roughly $5. To the west is 18th, where a nondescript Chinese market offers Myanmar cake (bane mont) and a selection of salted fish (nga phal oung). Towards the top of Pansodan Street is the Pansodan Gallery, displaying a modern impression of the city by the brightest young artists of Myanmar. For lunch we would recommend Green Gallery on 52nd, specialising in salads and Thai-inspired curries, designed, prepared and served by the chirpy proprietress Ma Bo and watched over by the resident family of cats.

Lottery carts, trishaws, and hawkers peddling posters of Buddha and cigarettes straddle the pavement and just when you think the way is safe to put a bold step forward you will find yourself narrowly avoiding trampling upon a trouser-less toddler squatting on the floor.

Leaving downtown one can venture north to the ornate and hidden Sitting and Reclining Buddhas on Shwe Gon Taing Road, the resplendent Inya Lake, and the Bogyoke Aung San Museum, set in the childhood house of Aung San Suu Kyi. 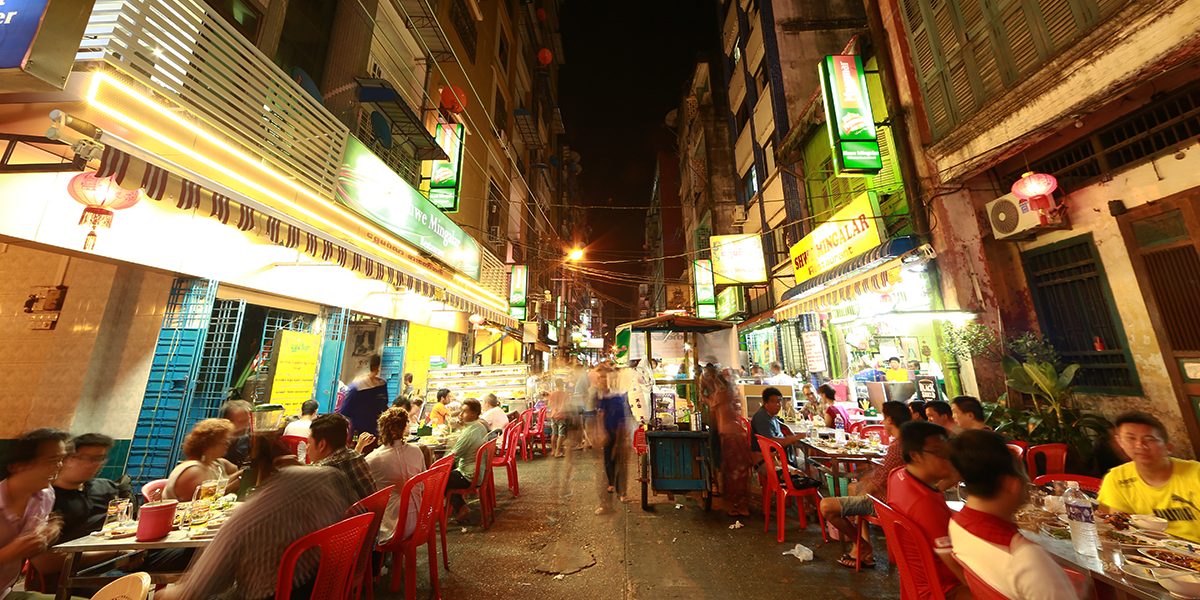 In Dagon Township along Za Gar War Road is the former Pegu Club, once the pulsing heart of Colonial Rangoon City and supposedly where Rudyard Kipling wrote The Road to Mandalay. If the caretaker is about you may be granted access up into this old teak building where, although dilapidated and rotting, an essence of the sparkling Raj remains.

If keen to dine with the ghosts of Rangoon, Burma-past, you can pay a visit to The Strand Yangon, once described as ‘the finest Hotelery East of Suez’. Today it continues to serve up the best High Tea in the city and when tucking into a tower of dainty muffins, it is not too hard to imagine W Somerset Maugham at the bar playing with the cucumber in his G&T, or George Orwell in the corner scribbling down the first draught of Burmese Days.

For a more native flavour, you can opt for Myanmar Beer and barbequed snacks on 19th Street, the most vibrant strip of nightlife in Yangon. Spritely waiters nip between tables serving locals, expats and tourists, here on the street where, more than anywhere else in the country, all three rub shoulders seamlessly, together conjuring good-natured carolling to the backdrop of a lottery-cart tumbling down the street blaring K-Pop.

The best however, has been left to last.

Shwedagon Pagoda is the glittering wonder of  the city and top of most people’s lists of places to visit in Yangon. Its splendour however does not purely come from its mammoth size or the tonnes of gold-leaf that has been plastered over it, but also from the fact that it is not a relic, but a living icon of modern Burmese life. Through British imperialism and military junta, Shwedagon was always there, imbued with centuries of worship, a site of both daring protest and quiet comfort, its gleam lighting up at the black sky, or as Maugham put it, ‘a sudden hope in the dark night of the soul.’

On your way to Shwedagon from 19th Street, you will likely pass young men playing football in the road lit up by the glare of the sacrosanct Sule Pagoda. In the same vein, although Shwedagon is as sacred as St Peter’s and the Kaaba, it imposes none of their severity. Instead you will find giggling couples and irreverent toddlers taking their first steps and when not distracted by snapping selfies, young, bright Yangonites in snapback cap and longyi will likely come up to you to practice their English and introduce you to their pagoda.

As their tongue loosens, between poignant pauses in the narration of Shwedagon’s history, you will bear witness to the hopes and fears of Yangon’s youth. Amongst the melodious throbbing of gongs and the gleam of silver and marble, observe the look in your unsolicited guide’s eyes as they point out the glittering jewel at the pinnacle of the stupa.

For the look in their eyes is as spectacular as the jewel itself. It is not only fervent pride, but also a deep-rooted optimism.

Indeed, the greatest charm of Yangon is in the buoyant nature of its people who, like their city, retain the romance of the past while standing with confidence in the face of the future.