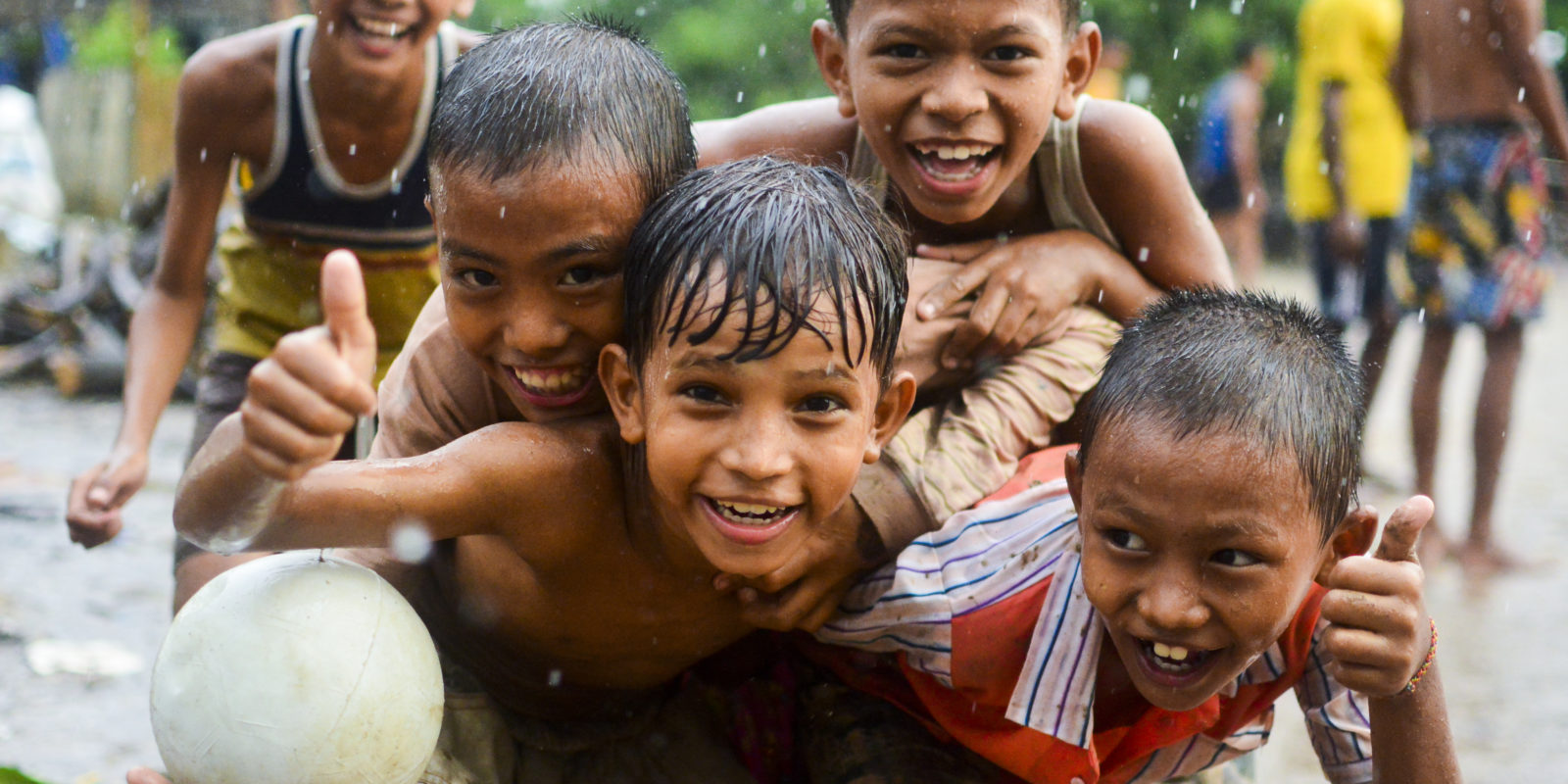 Looping around Yangon is the Yangon Circular Train. Used commonly as a foot thoroughfare this railway line, like most in Myanmar, is less frequently used by locals and tourists in comparison to busses or taxis. However, for those who are basking in the luxury of time and are drawn to authentic travel, the circular train in Yangon holds many attractions.

The route reaches right up to the northernmost environs of the city above the international airport and swings down to the upper lip of downtown Yangon. This local Yangon train runs the circle route every day from early morning until just after sunset in intervals of 45 minutes. A round journey of the full 32 miles will take approximately 3 hours.

The train can be boarded at Yangon Central Railway Station. Like much of downtown Yangon, the railway station was built during the colonial era and though poorly maintained still exudes a shabby grandeur. Passing by uniformed, but seemingly idle personnel, make your way to platforms 7 and 8 where you will see a small and dark office at the centre where for 200 Kyat – roughly 15 American cents – you can purchase your ticket.

Joining you in your carriage will be a wide if not exhaustive cross-section of the Yangon populous: teenage boys wearing skinny jeans and Nike hi-tops; toothless and wizened fogies clutching baskets of fruit and spices; and elegant thamain-clad women, plastered thick like the bairn on their laps with thanaka bark paste.

The wide open windows, the liberty of sitting in the doorway with your legs dangling over the rails, and the eclectic passengers of the local train more than make up for any slight discomfort caused by the bouncing carriages and the exhausted, wheezing fans attached to the ceiling.

(Note the liberty of sitting in the doorway with legs dangling over the rails is gradually being phased out due to the increased use of newer trains with automatic doors. Yet another reason to board the Yangon Circle Train as soon as possible!)

With a shuddering jolt the train will be off, reaching a top speed of just over 10 miles an hour. The first 45 minutes or so takes one through the underbelly of Yangon. There is much of interest to be seen between these early stations: old men playing chess with the board drawn in chalk onto the pavement; younger men cracking open the first bottles of Myanmar Beer of the day; and men and boys of all ages scrambling up and down scaffolding with an exhilarating lack of caution.

On travelling by rail north out of Yangon in the 1970s the travel writer Paul Theroux wrote:

‘It is pleasant to leave Rangoon by rail: the train goes around the city and five minutes from the station you are in the country, a low swampy rice-growing area beside the Pazandaung Creek, where in the courtyards of the monasteries the monks are at prayer, and crossing the fields are processions of people – schoolchildren with satchels, office workers setting out in white shirts, farmers with mattocks – the early morning march in the tropics to the tune of temple bells.’

Whether travelling clockwise or anticlockwise, bear in mind that Yangon is much changed since the 1970s and it will take at least 40 minutes in either direction until one catches sight of field-crossing satchel-clad children. However they will appear to patient travellers in time. Jumping off at stops like Insein, about 17 kilometres northwest of Yangon Central Railway Station, is like disembarking at a small town where the rush of Yangon is muted.

Insein is infamous for its mammoth circular jail – built by the British and today notorious for holding dissidents and political prisoners. Here in Insein one can visit the grand Kyauk Daw Kyi Pagoda and walk to the ‘village’ of Porkan, taking a breather in a tea-house for a reviving plate of tea leaf salad and peanuts.

Naked urchins race alongside the track, plunging into pools and puddles during the wet season, shouting, squealing and roaring in delight at the sight of camera lenses peering out of the carriage windows.

After Insein the country quickly becomes rural, with flat stretches of paddy fields where during the monsoon, farmers wade waist deep in the water wearing conical bamboo hats. There are muddy chilone pitches, where men and boys play with fervent dexterity, their longyis hoisted up around their groins, and naked urchins race alongside the track, plunging into pools and puddles.

A pleasant place to disembark is the small settlement of Kyaikkale, where there is a quirky pagoda complex with an assortment of bright shrines centred around a pool with soft-shelled turtles.

On the other side of Kyaikkale station from the shrines, one can pass through a grand set of iron gates which one would expect to lead to some forgotten colonial country house. There is, alas, no crumbling estate, but around a corner of foliage there is a wooden outbuilding in which has been placed, almost wall-to-wall, a full-sized billiards table. Here the men in their free hours play a version of the game whereby one picks a handful of playing cards from a deck and then attempts to pot the balls corresponding to the number on the cards. If not in the midst of a game, when passing by this shack travellers may well be invited inside to try their luck.

The station next to Kyaikkale is Mingaladon Bazaar, just over an hour and half into an uninterrupted trip. Mingaladon Bazaar is a comparatively large Yangon train station and on many days of the week is the bustling hub of the route due to a wholesale vegetable market that takes place on the platform. A great commotion ensues at this market as mammoth sacks are flung onto the train in a hail of squarks and barked commands.

Young men and women nip on and off the train with great mounds on their back, dumping piles of tightly packed fruit and veg onto the floor until the carriage holds more produce than people. Sometimes the sacks are accompanied, sometimes not, left to fend for themselves as the train rolls out until further down the line someone jumps on board to chaperone them off the train in central Yangon.

The village of Weibargi is just beyond Mingalardon. It looks little more than a sparse hamlet from the platform but venturing down the track the trees part and smaller paths begin to branch off, each lined by little bamboo houses, many with their own gates and garden fences. At the centre of the village space has been cleared for a patchwork of football pitches.

Breathless boys with a grasp of English, sweating and wearing English Premier League football shirts, will likely rush up to any unexpected visitors to Weibargi. After engaging in a smattering of small talk, if you are male you will likely be invited to join the game, while the younger children gingerly take hold of the fingers of all those remaining on the sidelines.

One can spend hours in such places, drinking ‘British Tea’ in the tea houses – extra milky, extra sweet, extra strong! – sampling the local delicacies and perhaps puffing on a green Burmese cheroot. As the sun begins to set, the scenery takes on a richer glow, free from the wash of bright sunlight or the haze of rain. And as the shadows elongate and the football games push on through the waning light, and the first bottle of Grand Royal Whisky is cracked open, it is tempting to remain and be party to the intimate sanctities of a Burmese village past sundown.

Alas, transport from such places as Weibargi is hard to come by. And so as the sun does begin to set, the sound of a train rattling along the Yangon Circular Railway should be your clarion call to pay your bill and hasten along the path back to the platform.

As the shadows elongate and the football games push on through the waning light, and the first bottle of Grand Royal Whisky is cracked open, it is tempting to remain and be party to the intimate sanctities of a Burmese village past sundown.

Quieter folk you will find in your carriage now. Keeping an eye out for stray branches, stick your head out the window, enjoy the cooler breeze and watch as the flickering camp fires of rural Yangon are replaced by the neon and illuminated tubing of the fast-urbanising suburbs.

The occasional power cuts on the train will render these city lights yet more resplendent. Savour the peace of the rocking train while you can, for soon – though perhaps not as soon as you would expect – you will be back in the rollocking centre of Yangon and the rurality of Kyaikkale and Weibargi will feel more than a city rail-line away.