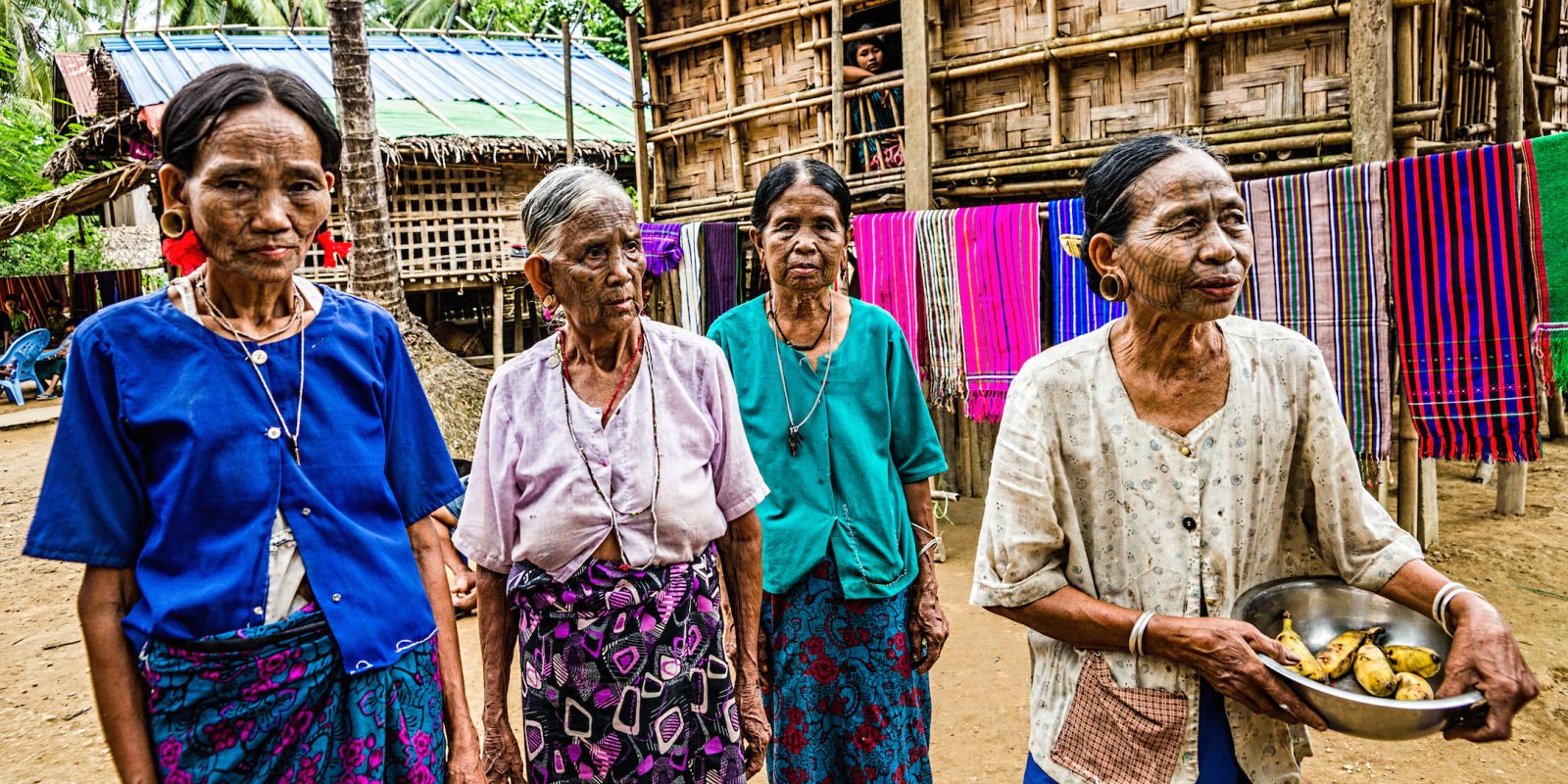 Chin State is rugged and chilly. The people are wrapped up in coats and woolen hats, houses tilt over sharp cliff faces and frosty mornings are infused with the smell of charcoal, wood fires and the thick, grainy Chin coffee.

The horned skulls of the indigenous basc deer are hung above most doors leading to a slightly Spartan ambience. Everyone has a ruddy glow to their face and the bowls of tough mithun meat on offer are as invigorating as a day trekking over the Chin Hills. The terrain is tough, the wind at times bitter and the Chin people have to work damnably hard to scrape out a living.

Chin State in Myanmar is north of Rakhine State, the former Kingdom of ArakanMrauk U, and borders the Indian state of Mizoram. Being isolated and mountainous, Chin State suffered economic and developmental neglect by the former military junta and it is estimated that 70% of the population live below the poverty line; 25% live below the ‘food poverty line’, five times higher than the national average, which means their entire income goes on feeding themselves and their family.

The Chin ethnic group is thought to number roughly 500, 000. Myanmar in general is made up of a variety of ethnicities that, although ancestrally related, now have individual dialects as well as cultural practices. What is referred to as the ‘Chin language’ is in actual fact an amalgamation of these dialects and acts as the lingua franca throughout the state.

The Chin people lived for centuries in local chiefdoms as part of a free and unified Chinland that stretched into Chin State’s modern-day neighbouring states as well as into Bangladesh and the Indian states of Mizoram and Manipur. This all came to an end when between the years of 1872 to 1889 the British invaded Chin territory and separated the administration of Chinland into three British divisions: that of Bengal, Assam and Burma.

As in Shan State and in many or the other ‘borderlands’ of Burma, the British left the administration over the Chin Hills up to the local people to a much greater extent than in the central Bamar-dominated regions. The British policy of divide and rule meant that the majority of the ethnic races in Burma were reluctant to return to the Bamar yoke when independence came after the Second World War. When Bogyoke Aung San, the ‘architect of Burmese freedom’ and father of Aung San Suu Kyi, was assassinated in 1947, the fragile unity of the country splintered and has only been kept together – at least in name – by the heavy hand of the Burmese military, the Tatmadaw.

The Chin National Front (CNF) and its armed branch the Chin National Army (CNA), is a resistance movement that was formed in 1988, in Mizoram, just a few months before the infamous countrywide student uprisings on August 8th 1988. In September of that year, in Hakha student demonstrators occupied the government offices before the Tatmadaw sent in an infantry battalion from Kalaymyo. Many students fled across the border and there joined the ranks of the CNA to contribute towards the armed struggle against the Burmese military.

Abuses against the Chin people

In 2009 Human Rights Watch published a report into the habitual human rights abuses committed against Chin civilians entitled, ‘We Are Like Forgotten People.’ HRW highlighted a series of shocking testimonials against soldiers of the Tatmadaw including:

Furthermore, it was noted that ethnic and religious discrimination was habitual in preventing the Chin people from being awarded high-ranking governmental posts. At the historic election in November 2015, Chin State voted overwhelmingly for Aung San Suu Kyi’s National League for Democracy (NLD) party.  However, now that the NLD are in power and the military backed party the USPD seemingly routed, it is likely that at the next general election the Chin people will vote for one of their own ethnic parties.

Since 2014 it has been possible for travellers in Myanmar to enter Chin State without the need for a government permit. This has allowed foreigners to meet these ‘forgotten people’ as well as the chance to visit destinations in Chin State that the local population are so proud of, principally Chin’s highest mountain, Mt Victoria.

When in Myanmar, Chin State can be reached by taking a 4X4 from Bagan – roughly a six hour journey. Alternatively it is possible to rent a motorbike from Mandalay. This route goes over the rolling plains approaching the (ever-retreating) Chin border to Saw. From Saw one will leave behind the crumbling asphalt roads and ascend up the winding mountain track to Mindat.

From the humble mountain-side town of Mindat, one of Chin State’s and Myanmar’s highest towns, treks can easily be made to the surrounding villages of a variety of different Chin ethnicities. The way of life here is tougher in many ways than that in the luscious hills surrounding Hsipaw and Kyaing Tong in Shan State. Around Mindat some of the ethnicities are so shy of foreigners that they will rush inside their houses when you approach. As for the children, if not playing fervently with roughly-cut spinning tops, you may likely pass them trudging back from the mill with a pack of ground millet corn on their back.

When in Chin State, it is possible to visit the famed tattooed women. Contrary to common belief it is not all Chin women that have these so-called ‘Myanmar tattoos’ but only certain tribes of the Chin ethnic group. Each of these tribes have their own design, with the Uppriu ethnic group tattooing the entirety of their face black including the eyelids. Since Burmese independence, Chin State has come further under the influence of the central government – what some locals refer to as ‘Bamarisation’ – and since the 1960s pressure to end this practice has been adamant. The last generation of Chin girls in Myanmar to be tattooed were born in the 1990s.

Agriculture is the main occupation in Chin State. Before the people primarily practiced slash-and-burn agriculture, whereby a forested area is cleared for cultivation by setting it alight. The technique is unsustainable and so practices such as terrace systems and Sloping Agricultural Land Technology (SALT) are now encouraged.

Nonetheless, continuing slash-and-burn practices has brought Chin farmers into conflict with the national government over the land surrounding Mt Victoria. Known as ‘Khaw-nu-thone’ in Chin and in Burmese ‘Nat Ma Taung’, both meaning ‘Mother of Spirits’, Mt Victoria is over 3,000 metres high – the highest and most famous peak of the fissured Chin landscape.

Throughout the monsoon season (June-October) much of Chin State is inaccessible due to the mountain roads being washed away in floods. The optimum time to go is in December when the weather is cool, clear blue skies are forecast, and the rhododendrons are in bloom. On a clear day one can see as far as Mount Popa near Bagan as well as over the Indian border.

Mt Victoria also has an extraordinary biodiversity. It is home to an estimated 300 species of orchids alone, and it is said that for those on a first visit, they will potentially pass a new specie of bird every metre they walk. Birding tours can easily be arranged. Most of the twitching groups stay in one of the lodges at Kanpetlet, a quieter and prettier version of Mindat. At Kanpetlet, Myanmar’s ecological diversity is plain to see and the pine tree-peppered veneer appears more Bavarian than tropical.

Alternatively, before ascending Mt Victoria or embarking upon a twitching tour, one can stay in the trekking lodge ‘Aye Camp’, its name coming from the British army outpost that used to be located there (‘A Camp’). The lodge is very basic but the food prepared is exquisite. When it is not too cold a bonfire will be lit and players of traditional music will come up from the village along with local merry-makers to share a glass of the regional rum.

Myanmar’s Chin State suffers acutely from the phenomenon of ‘brain drain’; educated and capable youngsters from this wedge of Chinland often choose to leave as soon as they can, having little faith in being able to prosper at home. Many things need to be rectified on both a national and local level for things to improve for the Chin people.

Tourism can play a small but important part in that. Community based projects – a handful of which are currently in genesis – focusing on the elevation of the social, economic and environmental conditions, aims to not only help Chin State become a better place to visit, but also a better to live, and give Chin youth more faith in a future at home.