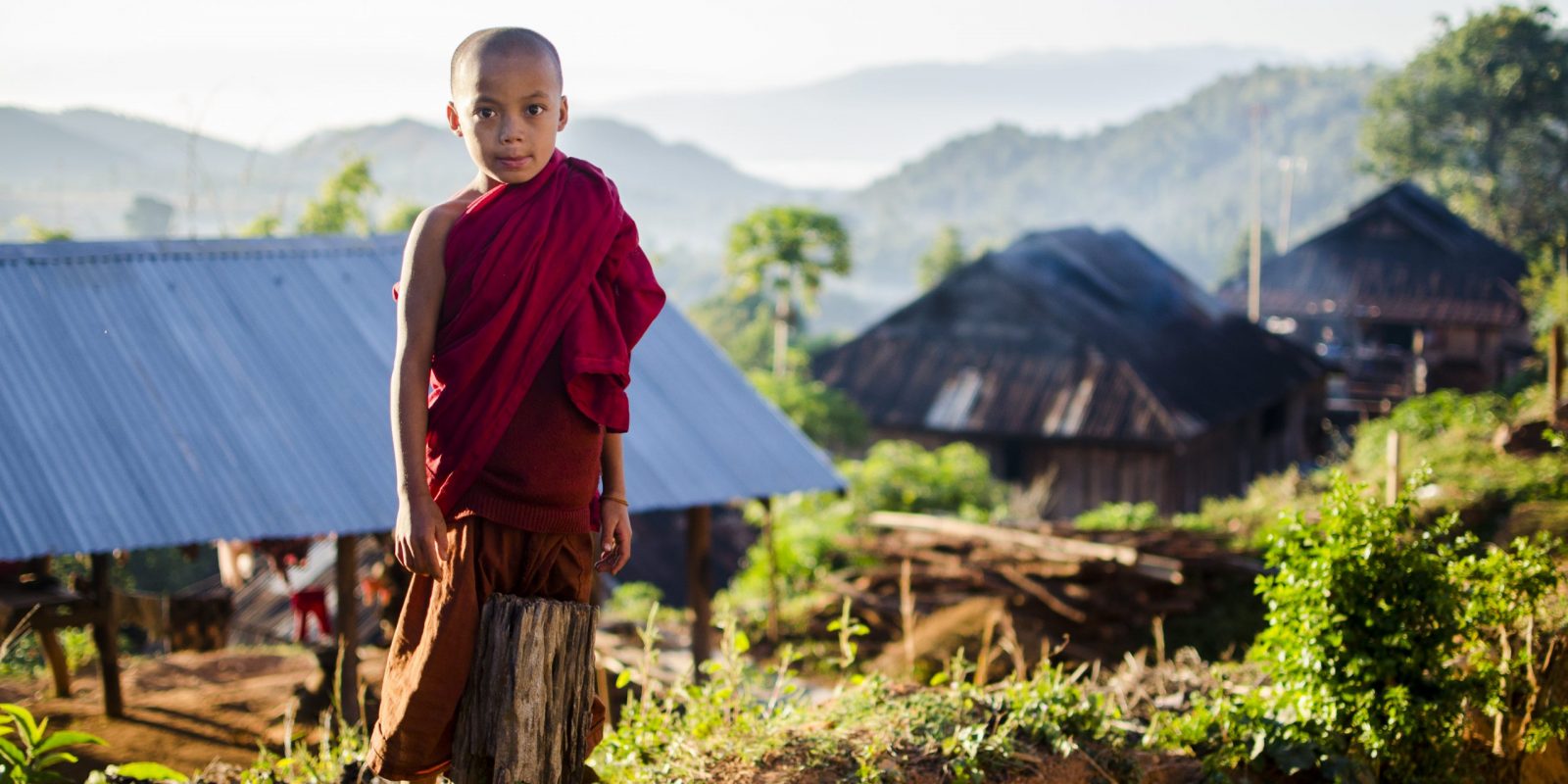 The annual Hsipaw Mahamyatmuni Pagoda Festival takes place on the last day of the three day Thadingyut Festival of Lights in October. It is a riot of vim and frivolity.

Thadingyut, also referred to as the Myanmar Festival of Lights, commemorates the day when the Lord Buddha returned from Trayastrimsa Heaven, the world of the devas, where he had been for three months preaching the Abhidhamma scriptures to his mother. The candles, lanterns, and electric bulbs that light up the streets of Myanmar during Thadingyut Festival are there to welcome the Lord Buddha upon his return to earth.

At the Mahamyatmuni Pagoda in Hsipaw in northern Shan State, candles are lit upon the shrines and around the 8 animals statues that are situated in a side-quarter just off the central terrace, while women sit in rows on the floor rocking gently back and forth and reciting Pali scripture. The lively bustle that usually imbues Burmese pagodas with an irreverent atmosphere is replaced by something altogether more sombre.

The Buddha’s three months in the world of the devas was a display of his gratitude to his mother for giving up her life for him when she gave birth. Therefore, over the three days of Thadingyut the young emulate Buddha in paying homage to their parents and teachers.

The Myanmar Thadingyut Festival marks the end of Buddhist Lent. Much like lent in Christianity, the Buddhist Lent (vassa in Pali) is traditionally a time of self-restraint and sobriety. The dictates that are usually only prescribed to by monks and the laity on festival days, are more commonly abided throughout this period. Ascetic practices are often adopted such as abstaining from alcohol, smoking and sometimes even meat. Monks travel less, and no weddings take place. This time also coincides with the monsoon season, leading to Buddhist Lent also being referred to as ‘Rains Retreat.’ That is, not the rain retreating, but people retreating from the rain.

Novice monks are released from their lives of fasting, study and saffron robes and rush home to gorge on mohinga and home-made curries, scuffle about playing football with their friends and grow their hair out once more.

Thadingyut Festival marks the end of vassa and the monsoon coming to a close; drier days and the cooler festival-filled months of the Burmese Winter (‘blanket season’) are in sight. Novice monks who have been sent to the monastery since their noviatiation in April or May are released from their lives of fasting, study and saffron robes and rush home to gorge on mohinga and home-made curries, scuffle about playing football with their friends and grow their hair out once more. For the older boys, the end of lent brings the opportunity to begin wooing girls again. For all the family, Thadingyut Festival of Lights looks ahead to cooler, drier days of festivities and merriment.

Thus, in many cases, save for the Buddhist New Year Water Festival Thingyan in April, one will never see the Myanmar people as a nationality more upbeat and frivolous than after Thadingyut at the end of Buddhist Lent.

And none more so than in Hsipaw, on the third and final day of the festival, when the procession of ‘precious things’ are transported up the main road to the Mahamyatmuni Pagoda as offerings.

Hsipaw is a placid town with a rich history. Set in the Shan Hills, about an hour’s drive west of Lashio, capital of Northern Shan State, and a three hour drive east of Pyin Oo Lwin just up from Mandalay, Hsipaw was once the proud capital of a glorious Shan princeton. Today most visitors to Hsipaw are there for the splendid trekking opportunities up into the Shan Hills to spend a night in the Palaung villages. The town itself offers a langous river, a Standing Buddha and a ‘Little Bagan’.

All comes to a head on their Pagoda Festival Day. Families and local clubs group together to build bamboo towers (‘giving trees’), sometimes up to 5 metres high, upon which an array of ‘precious things’ are placed. The thin beams are plastered with smooth Kyat notes, bananas hang from their arms as do shiny trinkets, football shirts, mannequins and strips of anything gold and shiny. Some are simply plastered with the silver or golden foil from the inside of cigarette packets.

Women and the very young and very old line up on the pavements as the procession filled with men and boys, beginning soon after midday, makes its slow progress towards the pagoda. Like many things in Myanmar, the lack of pace is made up for by an excess of noise. Aggravating the more conservative quarters of society, boom boxes are carried along within the procession or hoisted on the back of motorbikes, skeletal Chinese tractors and pick-up trucks, which are likewise decorated in tinsel and bunting and also carry bunches of precious things.

The bamboo towers often have a base of bamboo sticks in a star shape, with six ends pointing out. One of each is grabbed onto by one of the party and in the constant lull of the traffic – the procession is static for the majority of the time – the men and boys race around in a circle at an increasing pace before one of their party – the smallest, the fattest, the most intoxicated – stumbles and falls and the whole thing shudders to a stop with a cry. The giving tree takes a dive to one side, narrowly missing crashing into the crowd – a fate which neither revellers or onlookers seem particularly concerned by. The design of the giving tree is robust and so they rarely splinter or display any sign of damage after one of these tumbles

Those without a bamboo tower to grab onto simply dance with a bezirk enthusiasm that visitors familiar with the Burmese party scene will recognise. Electronic Dance Music (or EDM, a sub-genre of music that the young Burmese are particularly enamoured with), K-Pop and the odd classic from the 90s Western World boom out as those in the procession writhe and twirl with abandon. Not a prolific sight in Myanmar, but you may even spot a ladyboy gyrating through the procession, as little a point of interest on this day as the errant foreigner in the crowd.

Although the odd can of Myanmar Beer may be spied – clutched tightly and with half the content sprayed with unintentional gratuity on all those in the near vicinity – and although one may spot the red lips and eyes of those buzzing on betel, the vast majority of these bacchanalian roysterers are likely to be high on nothing more potent than the communal joy and mob mentality of devout revelry.

Despite the tut-tutting that may come from some corners of the sangha, the root of this celebration still stems from the unchallenged passion for Buddhism found throughout Myanmar. The Mahamyatmuni Pagoda Festival is an expression of piousness that seems to transpire in concordance with a flamboyant display of love of town and a love of community. But it is a piousness that still springs from the same source as that of meditation at pagodas and alms-giving.

Young boys wield toy AK47s and pummel imaginary bullets into the sky between skimping under the towers and clambering atop the bonnets of stationary trucks.

You are just less likely to see it on postcards and read about it in antiquated Burma travel guides.

In place of saffron robes and longyi the boys and men dress up in bombastic attire. In addition to aviators and necklaces, gold tinsel is strung around waists and ankles are bandanas are tied tightly about the brow. Others wear pollution masks around their mouths – black with painted on white teeth and skeletal screams. Some wear  balaclavas.

The old and the young, some of the latter which would barely reach to your waist, doll themselves up with black eyeliner and lipstick, or paint on bloody joker smiles. Young boys wield toy AK47s and pummel imaginary bullets into the sky between skimping under the towers and clambering atop the bonnets of stationary trucks.

A more stark contrast with the sobriety and tranquility of Myanmar’s Lighting Festival there is not. Whereas Thadingyut Festival affects to welcome Buddha back to the mortal world, the Mahamyatmuni Pagoda Festival seems to send the men and boys of the town in the opposite direction, high up into the stars.

As the afternoon progresses, the mosh pit of partiers and precious things moves closer to Mahamyatmuni and you will have to squeeze through the throng to see what happens once this saturnalian congregation finally reaches the pagoda, or indeed, if it passes straight through in the direction of the world of the devas itself.