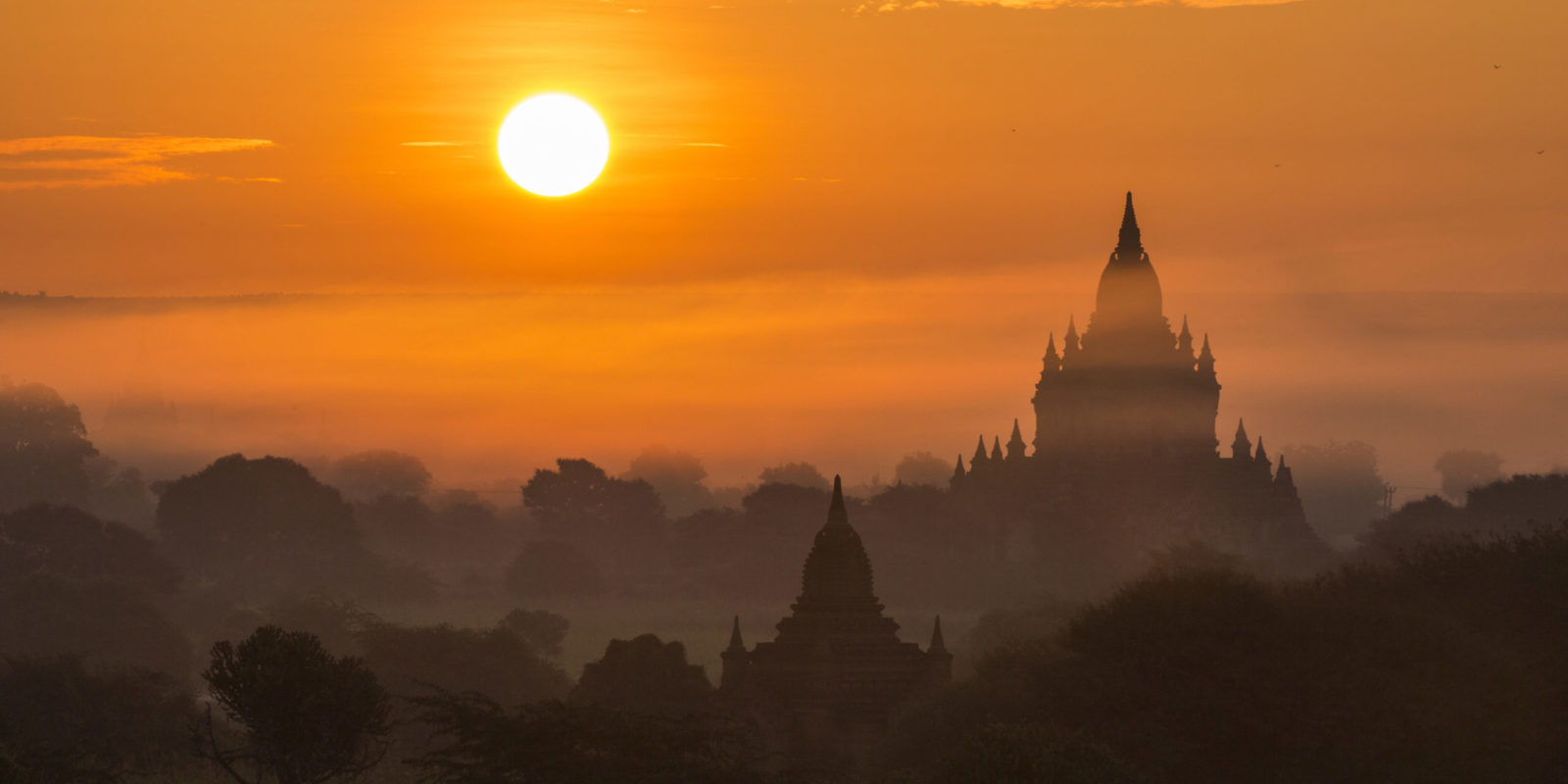 The auburn and beige pagodas and temples of Bagan peppered amongst the parched earth of Myanmar’s dry zone make for one of the most mesmerising panoramas in Southeast Asia.

Boarding a hot air balloon at dawn to watch the sun rise over the myriad stupas is the most spectacular way in which to commence 24 hours in Bagan. Mist trailing down from the Shan Hills and across the Ayeyarwaddy River drape over the payas of the Scorched Empire, imbuing the landscape with a bewitching veil. The light of the rising sun will reveal peanut farmers ploughing their fields with oxen and carts and save for the odd motorbike leaning up against the gnarled trunk of a crooked acacia, there will be little sign that you are gazing down upon a 21st Century vista.

For those who do not begin their visit to Bagan nestled in a wicker basket 40 feet high, the balloons bobbing up the skyline like colourful bubbles make for a startling sight that complements the rouge of the ruins.

The light of the rising sun will reveal peanut farmers ploughing their fields with oxen and carts and save for the odd motorbike leaning up against the gnarled trunk of a crooked acacia, there will be little sign that you are gazing down upon a 21st Century vista.

The Bagan Empire lasted from the 9th to the 11th Century and was the first power to unite the disparate peoples of the region we now know as Myanmar. The Empire was forged by the mighty Anawrahta who, with ‘his mother’s milk still wet upon his lips’, seized the city of Bagan’s throne by killing his cousin in single combat. He set about subduing the warring tribes of the region and established Theravada Buddhism as the dominant religion.

While what is now Yangon was still a squalid and smelly Mon fishing village, Bagan quickly became a glittering centre of commerce, academia and spiritualism. In a rush of religious fervour, the people of Bagan commenced building over 10,000 pagodas and temples which drew pilgrims from as far as Ceylon and the Khmer Empire.

The threat of a Mongol invasion led by Kublai Khan eventually saw the implosion of the Bagan Empire in 1287. Other ethnic groups, principally the Shan from the East and the Mon from the South, rushed to fill the power vacuum and Bagan, which at its peak had been home to over 200, 000 people, dwindled into a provincial town with neglected pagodas.

The ruins of roughly 3, 000 pagodas remain in Bagan. The former government’s tendency to embark upon the full-scale renovation of some – as opposed to more subtle restoration or preservation – has barred Bagan from being granted World Heritage status by UNESCO, depriving it of the funds and expertise that it so greatly needs.

Things to do in the Scorched Empire

We would highly recommend commencing your Bagan tour with a guide. The majority of these guides – dressed smartly in their white shirts and longyi – are great fountains of knowledge on Bagan’s past. Not only can they can direct you in what to see in Bagan but also narrate the history and legends that lie behind the ruins, greatly enlightening Bagan sightseeing.

The guides in Bagan are passionate about the place that for the majority of them is and always has been home. From them one can hear about the sinister king who built Dhammayangyi and was eventually murdered by assassins sent from India. At the grand Ananda Temple, commonly regarded as the most beautiful temple in Bagan, a guide can show you how to make one of the Buddha statues smirk.

In the village of Myinkaba, where children scamper after the wearier tourists offering ‘homemade’ postcards, you can learn about the Mon King Manuha who was imprisoned here by Anawratha. During his incarceration Manuha commissioned the construction of a particularly cramped looking Sitting Buddha, supposedly a reflection of the King’s own discomfort at being imprisoned.

For lunch we would recommend Bagan travellers to visit one of the restaurants just around the corner from Ananda. Try “Tharaba 2” where the horse and cart drivers eat. Here you pay not by the dish but by each large dollop of curry and, if given half a chance, the proprietor will tell you about the time Aung San Suu Kyi, the revered Lady herself, came to visit Bagan and ate at his restaurant. For those who need to cool down or are craving home comforts, the Star Beam Bistro offers charming service, freshly baked baguettes and fruit smoothies. “Don’t Eat Animals” aka “The Moon” is the best option for vegetarians.

Try “Tharaba 2” where the horse and cart drivers eat. Here you pay not by the dish but by each large dollop of curry and, if given half a chance, the proprietor will tell you about the time Aung San Suu Kyi, the revered Lady herself, came to visit Bagan and ate at his restaurant.

One of the most pleasant things to do in Bagan is leaving the well trodden path and soaking up the wonder of the ancient empire away from the throng. The promised romance of a horse or ox and cart ride wears thin after the first few bumps and jolts, and so instead we would urge you to either walk or rent an e-bike (nifty mopeds from China) exploring sandy tracks and obscure crumbling pagodas which don’t offer enough nirvana-merit to make them worth restoration.

If tired of ruins, you can visit the small village of Wetkyin just off the road to Nyaung U. The name of this village means ‘Giant Pig’ and is called so after the local legend of a great pig that once terrorized the village and ravaged the livestock until it was slain by a crown prince of Myanmar. Off the road connecting Old Bagan to Nyaung U, a large sign proclaiming the sale of toddy will lead you down a sandy path to an assortment of wooden shacks where, in the company of a dozing grandpa and children in green and white just back from school, you can sip upon some fresh palm toddy beer in the shade.

Over the course of your stay you will likely witness lithe ‘toddy tappers’ scaling the heights of palm trees with charred pots to collect the liquor tied to their wastes. Toddy is prolific in this region and sampling it fresh is one of the top things to do in Bagan.

When travelling through Myanmar visitors are likely to witness examples of the compassionate and community-minded society that has grown up in the country throughout the junta years. The Pali word for this is ‘metta’, which loosely translated means ‘compassion.’ When wondering what to do in Bagan to avoid the tourists trails, consider visiting examples of such metta.

The Kuthodaw Library was Bagan’s first library, set up in 2008 by Win Thuya, himself born and bred in Bagan. After being given a dictionary by his uneducated father when just a young boy, books and communication became Win Thuya passion. When living in Yangon as a young man, Thuya began amassing second hand books from the many open air stalls in Yangon. He eventually returned to Bagan with over 1, 000. The Kuthodaw Library (named after Kuthodaw Pagoda in Mandalay, otherwise known as ‘The World’s Largest Book’) can be visited at Sein Pann Street in 7th Street Peik Thay Lei Quarter in New Bagan. The Library puts on seminars, workshops and lessons promoting both Burmese and English literature and language. Those who travel to Bagan will also be able to make use of a book exchange and get involved in volunteering.

Win Thuya is also a project manager for the eco-library in No Jo Ai village, built out of the bottles discarded from hotels and cruise ships. (Tourists in Bagan are estimated to get through 2.4 million bottles of water a year!) The bottles are cleaned and dried and subsequently stuffed with plastic bags by locals who in turn receive food and clothing.

A student lays the table at Sanon

In 1990, in preparation for Myanmar’s ‘Year of Tourism’ in 1996, the government forcibly relocated the villagers of Old Bagan out of the Bagan Archeological Zone citing increased incidents of treasure hunting as one reason, and claiming that the villagers could not be trusted to preserve a site of such national importance. The villagers built up New Bagan on a stretch of peanut fields on the banks of the Ayeyarwaddy while the government went on to build their own hotels where Old Bagan once was.

Alternatively, visitors to Bagan can go to the more lively area of Nyaung U, just on the other side of Old Bagan. Sanon is the finest restaurant in Bagan, and is also a social enterprise training up the youth of Myanmar in catering and hospitality. Afterwards diners can nip along to the bar Hti  and round off the 24 hours in Bagan with the young, hip things of Nyaung U, the milk of White Russians wet upon their lips.