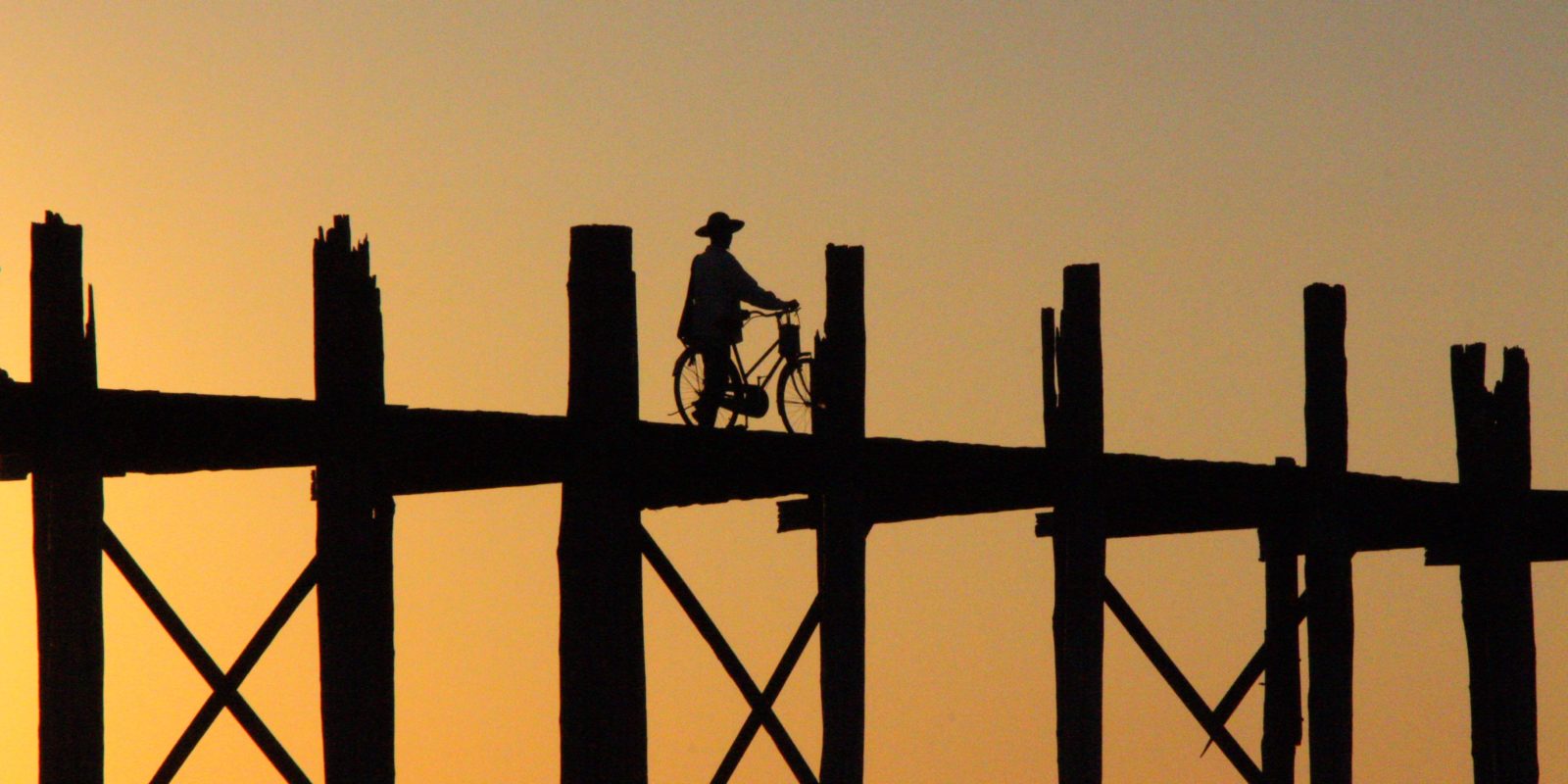 Largely due to Rudyard Kipling’s poem Mandalay, in which a British soldier in drizzly England reminisces upon the allure and sensuality of the orient, the city of Mandalay has been gilded in a romantic veil in the minds of many who – like Kipling himself – have never visited.

Less than a decade before Kipling wrote his poem at the end of the 19th Century, Mandalay was Burma’s Royal Capital, and full of, as the colonialist Sir George Scott put it, ‘agreeable scallywags’. King Thibaw, the last king of Burma, reigned from the Lion Throne, set in the middle of the Royal Palace, in the centre of Mandalay, at the heart of Burma, which was – in the minds of the natives – the focal point of the galaxy.

And yet the history of Mandalay is remarkably brief.

Thibaw’s city had only been built upon the swamps surrounding Mandalay Hill in 1857, less than half a century before Kipling’s poem and, to put it in global perspective, the same year that Macy’s department store first opened in Manhattan.

Mandalay was actually built from the dismantled teak beams of the ancient city of Amarapura, and it is here, at the ‘City of Immortality’, where we recommend you commence your 24 hours in Mandalay tour.

Just 7 miles south of Mandalay, Amarapura shows no sign of ever having been a grand capital city. Set on the banks of Taungthaman Lake, visiting Amarapura is one of the most popular things to do in Mandalay Division, not due to its regal lineage but because of the U-Bein Bridge which at a length of 1.2 kilometres is the largest wooden bridge in the world.

… settle down to watch the sun rise in the company of the elderly folk of the town, mumbling with familiarity to each other while going through their morning stretches.

There is a small hut attached to the left side of the bridge soon after you step off the banks where travellers can settle down to watch the sun rise in the company of the elderly folk of the town, mumbling with familiarity to each other while going through their morning stretches. Out over the bridge you can watch the silhouettes of the students from Yadanarbon University crossing with their umbrellas and bicycles. You may spy a fisherman wading into the shallow waters of the lake armed only with stick and net, and skulking around the beams under the bridge you will spot raggedly-dressed urchins making their own morning ablutions.

On the banks of the lake, after a hearty breakfast of fried samosa and falafel washed down with a mug of British tea or ‘la-pay-ye bi-leh’ it is time to enter the city of Mandalay, either by private taxi or jumping on the back of a motorbike. The course taken by the Mandalay-Shwebo Road would have been the route King Mindon Min took in 1857 when he uprooted Amarapura – palace and people and all – to create his own capital city.

When the British arrived after the Third Anglo-Burmese War less than thirty years later, the people of Mandalay, including the court, expected a massacre at the hands of the white giants, or as George Orwell put it: “… those columns of great beef-fed men, red-faced and red-coated.” There was in fact little immediate bloodshed but the British got down to assimilating Burma into British India: the young and nervous King Thibaw was exiled, the Buddhist education system dismantled, and Indians flooded in to take the top administrative jobs.

In time the look of Mandalay, the last city of Ancient Burma, began to change as the longyi replaced the paso and the men began to cut their hair short and grow moustaches in the European fashion.

To return to Scott:

The pigs have all been eaten up and the pariah dogs poisoned by municipal order; A, B, and C roads testify to the unromantic stolidity of the Military Intelligence Department; electric trams make it easier for the Burman to move to the suburbs and leave the town to the hustling foreigner.

The British used The Royal Palace as an army HQ and the complex was used for the same purpose when the Japanese invaded in 1942. As a result it suffered heavy bombing from the air over the course of the Second World War. In addition to the house to house fighting between the British and the Burmese Independence Army (BIA) against the Japanese, Mandalay came out of the war in a sorry shape.

The British author Norman Lewis describes visiting in the 1950s:

In the name there was a euphony which beckoned to the imagination, yet this was the bitter, withered reality …[A] squalid gypsy encampment, coated with a bone-white dust which floated everywhere, like a noxious condensation of the heart-haze itself … Hideous dogs snarled and scuffled in the streets, which were still rutted and broken from the pounding of wartime traffic.

Today, however, the city is one of the most attractive and culturally rich places in the country and there are a score of interesting things to do in Mandalay. Myanmar’s most sacred religious sites, save for Shwedagon, are principally located in Mandalay; it is home to the most talented and prolific artisans of the country; and its wide streets and nippy motorbikes ward of the claustrophobia of Yangon’s clogged traffic.

Mandalay is also without the urban sprawl of Yangon, meaning that one can quickly escape the concrete and explore the city’s greener environs. One of the finest ways to do this on a bicycle tour.

The Grasshopper Adventures’ Magnificent Mandalay Mornings Tour will take riders pedalling into the countryside across paddy fields, past the little school buildings where the pupils clad in their white and green uniforms bellow out their lessons, and stopping at houses and workshops to meet the locals and learn a little about their lives. The Mandalay Teashop Foodies Tour will take punters to the best teashops in the city, settling down to breakfast goodies such as the noodle dish mohinga, sweet fried-rice pancakes, and pla-da-a chin-seq – a sour and spicy stuffed crêpe.

Teahouses are an important place in Mandalay. The former US Special Representative to Burma Derek Mitchell once famously remarked that ‘in Mandalay, important words start at tea shops.’ It is within these tea houses that formal meetings and discussions are conducted, deals are made, plans are cooked and like the cafés and bars of la rive gauche in Paris and Berlin’s Ku’damm, it is the teahouses of Mandalay that have given birth to some of Myanmar’s most renown artists, drinking cup after cup of green tea and smoking Burmese cheroots.

Talking of which, sated from the Foodies Tour, it is time for more culture. So, what to see in Mandalay? One should first go to the Mahamuni Paya , the most famous Mandalay pagoda and home of the most sacred Buddha image in the country. Not far from Mahamuni, is the Kuthodaw Pagoda, commissioned by Mindon Min and dubbed ‘the World’s Largest Book’ due to its 730 marble tablets covered on both sides with dense script, comprising the entirety of the Theravada Buddhist canon.

… like the cafés and bars of la rive gauche in Paris and Berlin’s Ku’damm, it is the teahouses of Mandalay that have given birth to some of Myanmar’s most renown artists, drinking cup after cup of green tea and smoking Burmese cheroots.

Following this one can ascend Mandalay Hill for sunset. The climb is a total of 1, 729 steps but cars can drive up the bulk of the hill and there is also both an elevator and a lift. The terrace at the top of Mandalay Hill offers startling views over the river to Mingun, as well as deep into the Shan Hills of the east and the Sagaing Hills to the west, all of which are cast in a golden haze at sunset.

The summit of the hill is a popular haunt for students and novices to practice their English. If you are a native speaker you will likely find an attentive crowd congregate about you, perhaps even sitting cross-legged at your feet, timidly proposing questions and hanging on your every syllable. Thankfully these diligent students are charming and respectful enough that this should not spoil the sunset at Mandalay Hill but enhance it.

Once you have descended from Mandalay Hill darkness will have fallen over the city and the beer stations and restaurants will be filling up. One can safely walk down the wide streets of Mandalay as the cheerful hum of gossip floats over the pavements, mingled with perhaps just the occasional exuberant hoot of a motor horn somewhere in the distance.

For supper travellers can try the tandoori Indian at the Spice Garden Restaurant of the Hotel by the Red Canal. The bolder can opt for the Chinese food market on 84th Street.

When full, wander into any beer station, recognisable by the broad green Myanmar Beer banners above them, and settle down for a couple of pints of draught with a shot of rum (pau-uk see be-er, ne kwe!).

While planning what to do in Mandalay for your second 24 hours, you can choose between watching the English Premier League on television or the ragamuffin game taking place on the road, where young boys yell and whoop as balls fly in and out of restaurants, over the heads of passers by and under the wheels of the odd stray trishaw.