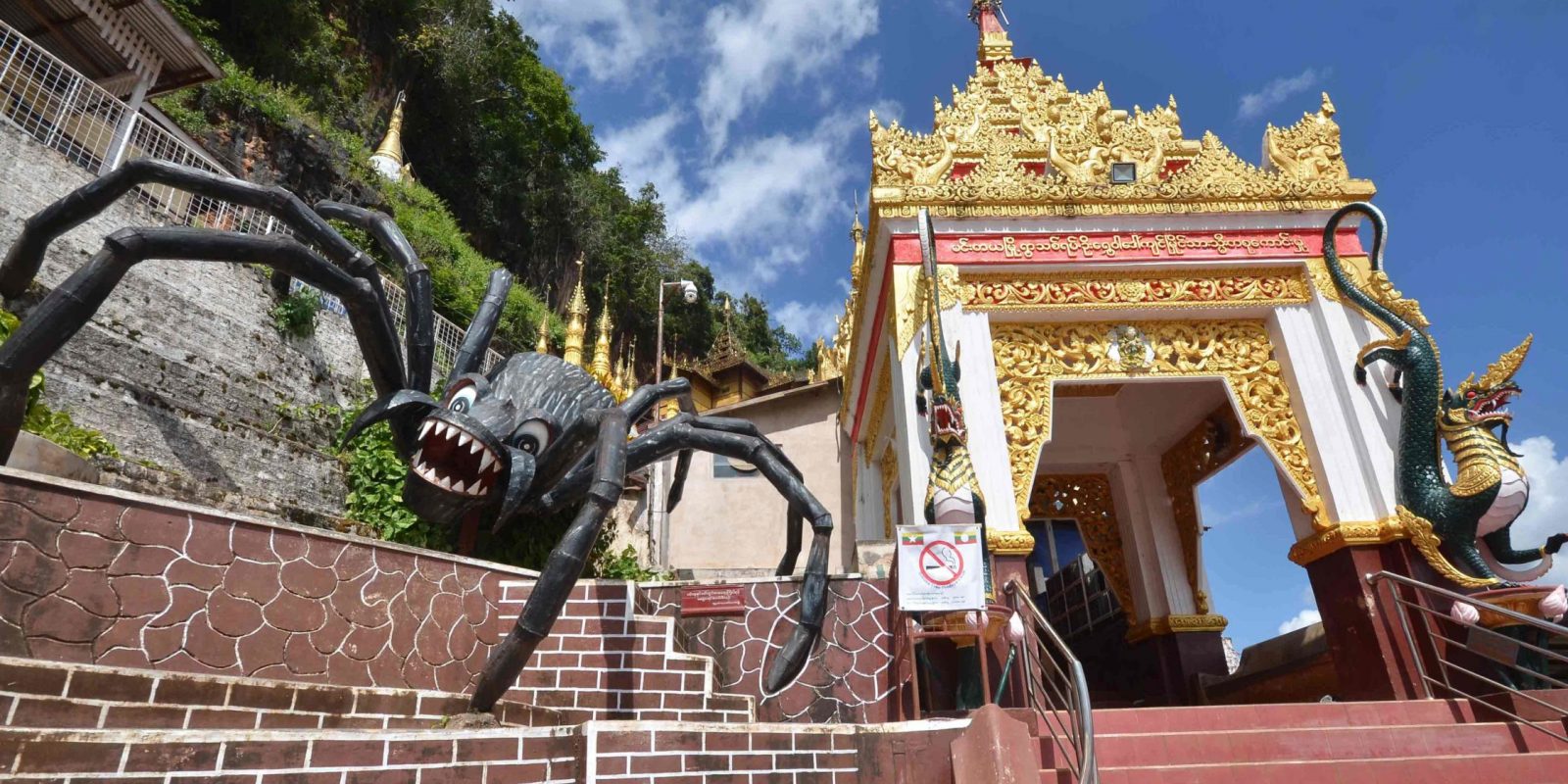 A legend tells of seven sisters travelling from the Kingdom of Loi Ngern who bathed in the Pone Taloke Lake in today’s Southern Shan State. Beguiled by its beauty, the sisters lost track of time and at dusk took shelter in a nearby cave. Unknown to them this cave was the lair of a ‘vicious black bear spider’ who shortly returned from a fruitless hunt, cantankerous and vituperative, to find the seven sisters asleep.

Fortuitously, it was at this moment that the mettlesome Prince Kummabhaya of Kaytuymatti passed by and upon hearing the sound of ‘crying, complaining, and grumbling’ from within the cave took the fight to the spider. With an arrow from his bow he eventually smote her on the mountainside and exclaimed triumphantly “Pindaya!” meaning “I have captured the spider!”

So the town was named and in celebration, on the banks of Pone Taloke, Kummabhaya promptly married the youngest of the seven sisters.

Today, travelling to Pindaya is an attractive option for those looking to explore the campestral Southern Shan State while avoiding the crowds that can congest the mountain paths between Kalaw and Inle. The Pone Taloke lake is often the first glimpse of the town that visitors experience.

The more sybaritic traveller may forego such excursions and instead settle down in one of the tea shops along the road that rings Pone Taloke, slurping on a bowl of Shan noodles or dipping ee jah kwe into a cup of tea.

To extract the most out of the weekend in Pindaya we recommend arriving on two legs or two wheels, either by cycling from Heho or taking the light trek from the nearby village of Pwe Hla.

Alternatively, those arriving on a visit to Pindaya under the cover of night are recommended to rise early and make the most of Pindaya’s cool mornings, joining the townsfolk in their exercises around the central lake.

The more sybaritic traveller may forego such excursions and instead settle down in one of the tea shops along the road that rings Pone Taloke, slurping on a bowl of Shan noodles or dipping ee jah kwe into a cup of tea. To the canorous sound of the Buddhist dhama emitted from grainy television sets, while laden trucks begin to chug up and down from the mountains, Pindaya shakes itself awake …

Day One: Time for Tea

When Sampan last visited Pindaya we stayed at the newly opened Cottage House boutique hotel (“La Maison de Pindaya”), a short distance from the famous Sin Gaung (Elephant Head) Monastery. While nuns in blossom-pink came up to the hotel to ask for alms, we warmed our hands with a mug of Shan coffee and set upon plates of fluffy pancakes drizzled generously in Burmese honey.

Subsequently, picking on a plate of fresh fruit, we mapped routes for trekking in Pindaya, tracing the paths that wind their way out from the town and up into the hills, collectively known as the “Danu Trails.”

“Danu” refers to the dominant ethnic group of Pindaya, a subgroup of the Bamar. The Danu are principally engaged in farming and agriculture: sunflowers, avocados, mangos, oranges – and more than any of that – tea.

Tea is a serious business throughout Myanmar and nowhere is this more the case than in Pindaya. Walking north from Cottage House hikers will come to a tea factory of the Mor Shan – one of the largest tea farmers of the Pindaya Tea Cluster. It is at factories such as these that most local guides can take curious travellers through the intricacies of tea: from clipping to drying, fermenting and sorting; what tea is picked when, and how to differentiate green tea from white tea, black tea from red.

Those overwhelmed by the science of tea production may wish to supplement a factory tour with a visit to the office of the Lost Tea Company just along the track from Maw Shan.

Sitting down for a cuppa in their garden, Sampan heard the cradle of the world’s tea could be potentially identified as here in the hills of Shan State. Whether or not this is the case, Lost Tea certainly believe this tea to be up there with the world’s best, and by working with a selection of small-hold farmers, hope to be able restore global recognition to the Burmese bush.

All Lost Tea’s leaf comes from Pindaya but it is not long before our conversation leads us over the hills and further north, up to Nam Shan, an arcadia for tea lovers, termed “Little Switzerland” by the British, and said to be the home of the best Myanmar tea. Today, Nam Shan is difficult to reach for foreigners. However it is hoped that one day, in the hills across Shan State, a great tea trail can be crafted in the vein of the old Tea Horse Road – the  cha ma dao! – a millennia-old trading route between Southern China and Tibet, along which Central Asia horses were once exchanged for bricks of compressed leaf.

Climbing up into the hills of Pindaya is not quite as intrepid as all that, but the arrival of trekkers in a local village is still novel enough to provoke a flutter of excitement. Travellers may well be invited into villagers’ homes to take a grubby cup or two of “ye nway jin” – Burmese green drinking tea – and partake in some light-hearted raillery with the farmers.

It is at times such as these that the science and romance of tea is striped away and what is left is a humble extension of hospitality. Throughout the world, but certainly in Myanmar, a cup of tea is an honest gift to be gratefully received by the weary traveller; quenching thirst, warming hands, and refreshing flagging spirits.

The ubiquity of green tea in Myanmar – offered free in restaurants up and down the country – complements the warm hospitality of the people. The conviviality of the Burmese welcome, the smile, the chuckles, the lack of pretention, is akin to what was called Xenia in Ancient Greece – “guest-friendship”.

Home-stays are not yet permitted in and around Pindaya but foreigners can stay in some of the monasteries up on the hillside along the Danu Trails. It is here at these moments, at twilight up in the hills, sipping on green tea, that travellers are overcome by the heady charm of the xenia of Pindaya.

Day Two: Lord of the Leaves

When Sampan first went hiking around Pindaya, climbing down from the hills we were caught in a sudden heavy rain shower and took shelter in a small wooden hut situated in the middle of a tea field.

Not much bigger than a broom cupboard, the three of us sat crossed-legged on the floor, limbs protruding out into the elements while our spry guide produced from his rucksack a cornucopia of local salads that he had earlier prepared.

It is an early, joyous surprise for visitors to Myanmar – along with seeing thanaka and longyis for the first time – to learn that the Burmese love to eat their tea, as well as drink it.

The version we were eating in the broom cupboard was tea leaf in its crudest fashion – a dish favoured by students craving something stodgy that will keep them awake long into the night thanks to the punchy caffeine-boost.

The more formal version of laphet thoke is a-hlue laphet. This will commonly be seen at traditional celebrations such as weddings and novitiation ceremonies. The lahpet is dipped in oil and then kept separate from the other accoutrements of the salad by being placed in a traditional circular serving plate – the laphet ohk – with separate segments for the fried, peas, nuts, garlic, toasted sesame and other legumes, as well as some dried shrimp and ginger.

Idiosyncratic and incredibly moreish, this is Myanmar’s favourite snack.

Not much bigger than a broom cupboard, the three of us sat crossed-legged on the floor, limbs protruding out into the elements while our spry guide produced from his rucksack a cornucopia of local salads that he had earlier prepared.

Visitors to Pindaya with more conventional tastes can combine a tea tour of the town with a hike or motorbike excursion up over the hills to Ywangan. This is coffee land, made up of a patchwork of plantations principally run by the Shwe Tuang Thu Group and Genius Coffee. Ywangan is not yet set-up to accommodate independent travellers visiting on a whim but with advance planning it is possible to arrange tours of the plantations, sample some of the produce, and meet the farmers. (Contact Us right away if interested in more info on Sampan’s upcoming “Coffee & Tea Tour” … )

Returning to the town of Pindaya itself, the taste-bud bonanza need not stop. Travellers with a sweeter tooth should use the afternoon of their second day to pay a visit to Plan Bee, a social enterprise introducing advance bee-keeping to the nectar-rich regions of Southern Shan and Kayah States.

Plan Bee’s education centre is – with advance warning – one of the top places to visit in Pindaya. Sit down to hear about honey and sample their halva.

But perhaps it is the comfort of a hotel that you will be craving after the ascent up into the tea farms. Inle Inn Pindaya is the most upmarket hotel in town, with a selection of comfortable chalets in a leafy garden, as well as a small pool and spa, and an ornate restaurant with an expansive menu.

For dinner, a short walk from the Inn is the Wah Te restaurant (“Bamboo Hut”), an open-air construction with a glorious undulating bamboo roof and sublime menu of regional dishes.

A more local option is the jolly Papaya restaurant on Shwe Umin Road. In the same quarter as Cottage House and Lost Tea, this road leads along to the austere and antiquated Conqueror Hotel (worth poking your nose in, if you have time) and the town’s festival ground. If on a trip to Pindaya during the full moon of Tabaung, the town’s annual pwe will be taking place. In this case, this is the place where you will want to spend the early evening: chomping on fried snacks and local delicacies, quaffing Myanmar beer before taking a ride on the carousels and big dippers, surveying the gyrating mosh that will slowly congregate in front of the stage where Danu popstars sing to an adoring crowd.

Looking down upon the festival ground is the mouth of Shwe Umin. This is the legendary cave of Kummabhaya and the giant spider, and visiting it is traditionally one of the top things to do in Pindaya. Outside the entrance is a large and cartoonish rendition of the two combatants facing off while within are the 8,000 Buddha Images that draw hundreds of pilgrims each month.

If possible, it is best to visit the cave in a small group, as when free from the sound of trampling tourists, the rhythmic pattering of droplets falling from the stalactites and splattering on the stone floor provide an ephemeral backdrop to gleaming faces of the Buddhas within.

And yet, if none of these options appeal, we would recommend closing your 48 hours in Pindaya as they began.

At dusk, the townsfolk of Pindaya congregate once more around the banks of the Pone Taloke Lake, not exercising but washing their clothes and carrying out evening ablutions. Children splash and frolic in the water and their cheery smiles from the weedy shallows, hair sticking up in all directions, grinning through the suds, make for a beautiful close to a long weekend.

Here, in the gloaming of the Pindaya valley, with the twinkling of the lake and the smudged green hills farther off, it is no wonder how the seven sisters of Loi Ngern so easily lost track of time.