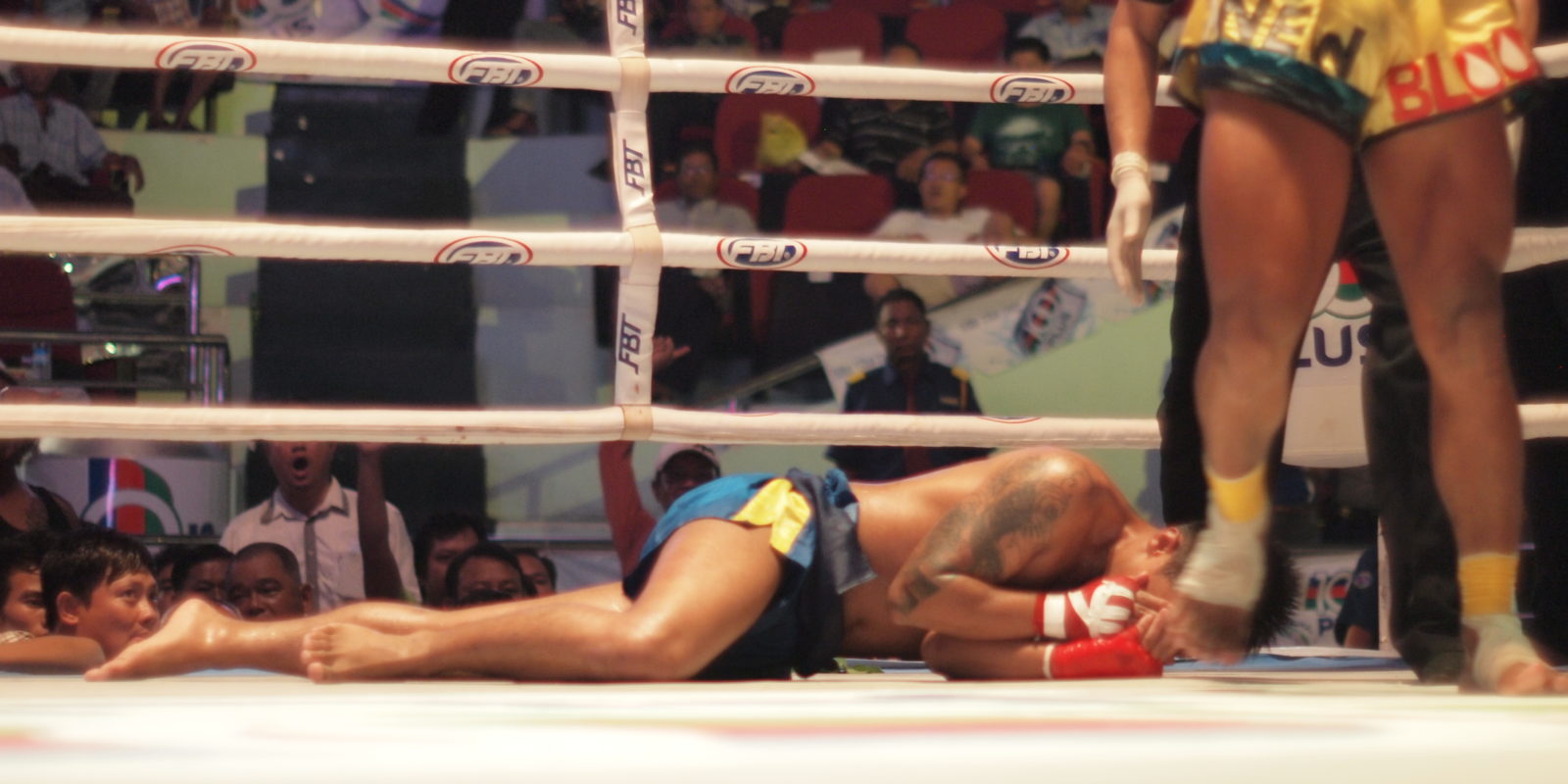 As globalization seeps into the country, Myanmar boxing, a brutal martial art that can be traced back to Imperial Burma of 1,000 years ago, is beginning to change its shape in the glare of international attention. Once the preserve of soldiers, it is likely that the ‘warriors’ sport’ will soon succumb to pressure to become more palatable to a global market.

To many outside Myanmar, Burmese boxing or ‘lethwei’ is seen as primitive and barbaric, more akin to a street brawl than to a martial art. Myanmar boxers wear very little protection; no shoes and no gloves but only a thin fabric gauze over their knuckles. A box is worn upon their groin and occasionally a mouthguard to protect their teeth. The dogged resilience that characterises most fights adds to the impression that this is a sport for thick-headed brutes. Compared to the feline, agile fighters of Thai kickboxing, lethwei in Myanmar rewards stockier combatants with a hefty resilience. An ancient lethwei maxim calls for fighters to be like rocks over which the waves roll, not the fish that shoot through them.

It is also true that there is blood. Often lots of it.

An ancient lethwei maxim calls for fighters to be like rocks over which the waves roll, not the fish that shoot through them.

Yet all this is not to say that there isn’t beauty and great artistry to Myanmar boxing, nor that the sport requires any less mastery of technique. Rounds of lethwei can be as fast and explosive as those in Thai kickboxing and each boxer needs to be proficient at not only deploying the large variety of attacks that are permitted, but in responding to them too. Many Burmese believe that while lethwei remains a sport for warriors, Muay Thai has turned Siamese boxers soft.

After football, in Myanmar lethwei is the country’s favourite sport, something that can be largely attributed to the Olympic boxer Kyar Ba Nyein or ‘Tiger’ Byar Nyein. Born into a poor muslim family in Mandalay in the 1920s Ba Nyein had begun boxing when he was just 13 years old. After the Second World War he practised with allied soldiers and it soon came to be an obsession of his.

Tiger, as he was to be known, went on to set up the Golden Tiger Boxing Club in Mandalay, bringing in the street children who would play outside the club, teaching them to box for free. Seven of Tiger’s students would go on to become champions in Burma, each wearing his tiger insignia upon their chests.

Tiger created and promoted a more uniform set of rules and regulations for Myanmar boxers, restoring it as a national sport and presenting it in a more favourable light to the Bamar urbanites who had lost interest. He did not however go as far as other countries in Southeast Asia.

In the 1920s, traditional Thai boxing had been adapted from a raw martial art very similar to lethwei into a regulated form of western kickboxing along with all the trappings: referee, judges, weight classes and of course, gloves. This is what we know today as ‘Mauy Thai’. Laos and Cambodia soon followed suit in regard to their respective martial arts, Mauy Laos and Pradal Serey.

In the early 1990s Mauy Thai’s international popularity began to soar. It was recognised as an official sport by various authoritative bodies, was attracting athletes from around the globe to its own professional league run by the World Mauy Thai Council, and was also a huge draw for tourists. The former Burmese military government took note and in 1996 – the grand ‘Myanmar Year of Tourism’ – they launched the re-fangled lethwei, confusingly given the official name “Myanmar Traditional Boxing”. Although still more primitive than Muay Thai, Myanmar Traditional Boxing had similar rules and regulations and the judges were now looking for endurance, technique and agility; not the first blood.

Nonetheless, Myanmar Traditional Boxing was still primitive enough to have Thai champions think twice before coming to compete in competitions in Yangon. There were still no gloves; headbutts and joint manipulations were permitted along with the use of fists, palms, knees and elbows. Groin shots were frowned upon but tolerated. The Ministry of Sports however drew a line at eye gouging, hair pulling and fish hooking – all of which are permitted in the older variant of the sport.

Thai boxers still come to challenge Myanmar boxers and vice versa. Such fixtures are eagerly anticipated by the Burmese, as they are seen as a replay of the one-on-one fights that Burmese and Siamese soldiers used to take part in centuries ago. Each nation has their own folktales about one hero or another who vanquished successive challengers from the opposing country. Regardless of the truth of these stories, it is the case that both Myanmar lethwei and Muay Boran (from which Mauy Thai sprung) originated in the countries’ respective armies and were similar enough for competitions to be had between opposing soldiers.

Carvings on the walls of some of the temples of the Bagan Empire (9th – 13th Century) appear to suggest that the ‘sport of warriors’ was originally initiated so as to keep Burmese soldiers fit during periods of inactivity.

The international popularity that Tun Tun Min so craves may well twist the sport he loves into something unrecognisable to the young boxers still competing in sand pits out in the provinces.

By the time the British annexed the entirety of the county in 1885, Burmese boxing had become a sport for the everyman, played in sand pits in villages across the country. The British however were unamused. They saw lethwei as a base, crass sport that stimulated the more scummy aspects of society such as binge-drinking and gambling. Myanmar boxers soon found themselves classed as vagrants and habitual criminal offenders subject to arrest.

While the upper echelons of Burmese society began to turn their noses up at lethwei in imitation of their colonial oppressors, Myanmar boxing continued to flourish in rural villages, particularly in the Mon and Karen ethnic regions. At festivals and the funerals of monks, lethwei tournaments would be held in these villages, a crowd sitting on the floor in a circle to form the ring, avid novice monks likely in the front row – close enough to feel the splatter of sweat, blood and tears – ready to cheer on the contestants, some of whom would be as young as six.

It was in these states that Tiger Byar Nyein found a wide crop of Myanmar boxers and today it is still thought that the raw life of Burma’s rural poor is a virile breeding ground for great boxers. In these regions, lethwei continues to be regarded as the best way for a family to display its strength and virility and the drive to follow in the footsteps of Tiger’s protégé champions is understandably strong. Additionally, the money each boy earns from fighting – even at such low key village events – will greatly supplement his family’s meagre income.

Meanwhile in Yangon, lethwei is taking on an increasingly international reputation. The Goldenbelt champion Tun Tun Min, widely regarded to be the greatest Myanmar boxer today, has stated his desire only to play foreign competitors in international tournaments so as to ‘make our traditional lethwei famous across the world.’

Enthusiastic foreigners are responding to the clarion call. Ardent, red-faced expats train weekly at the Lethwei Boxing School and as more backpackers begin to flood into Myanmar, surely it will not be long before Myanmar boxing matches are staged purely for the entertainment of travellers as is already the case in places such as Thailand’s Koh Phi Phi.

On the international stage, the jubilation surrounding the crowning of Aung La N Sang – otherwise known as the Burmese Python – as MMA World Champion in the summer of 2017 potentially displays the waning of lethwei in favour of the global manifestation of the sport.

If this is the case, it is only a matter of time before the gloves are on and headbutting is out; with greater commercialisation, greater regulation will undoubtedly follow. Guards of the old school of Burmese martial arts believe that if and when this happens, their sport, the last bastion of bare-fisted boxing in Southeast Asia, will no longer be a link back to the country’s imperial past but instead a Westernised, materialistic farce.

Modern lethwei remains traditional in aspects such as the pre and post-match dances and in the music that plays throughout each round so as to spur on the ‘nat’ spirit of the combatants. However the traditional leg tattoos which were once a symbol of pride for a Myanmar boxer are vanishing.

The painful process of tattooing with a thin piece of bamboo sharpened to a point was part of forging a boy boxer into a man and granting him invincibility through spiritual protection. However today the respect for the tattoos’ spiritual prowess is less acknowledged or understood by younger Myanmar boxers. Discovering the world through social media and television, they are attracted to the colorful tattoos of the west which can be implemented with much less pain, not to mention the pull of the lights and star quality of events such as the Muay Thai Super 8 Tournament in Bangkok. The international popularity that Tun Tun Min so craves may well twist the sport he loves into something unrecognisable to the young boxers still competing in sand pits out in the provinces.

Tiger’s challenge was to sculpt modern boxers out of the bruisers he found in the villages. Today, while lethwei flirts with modernisation in Yangon, young boys of the Mon and Karen still practice the old form with the same fervor and intensity. Where the twain meet, the new lethwei will spring forth.