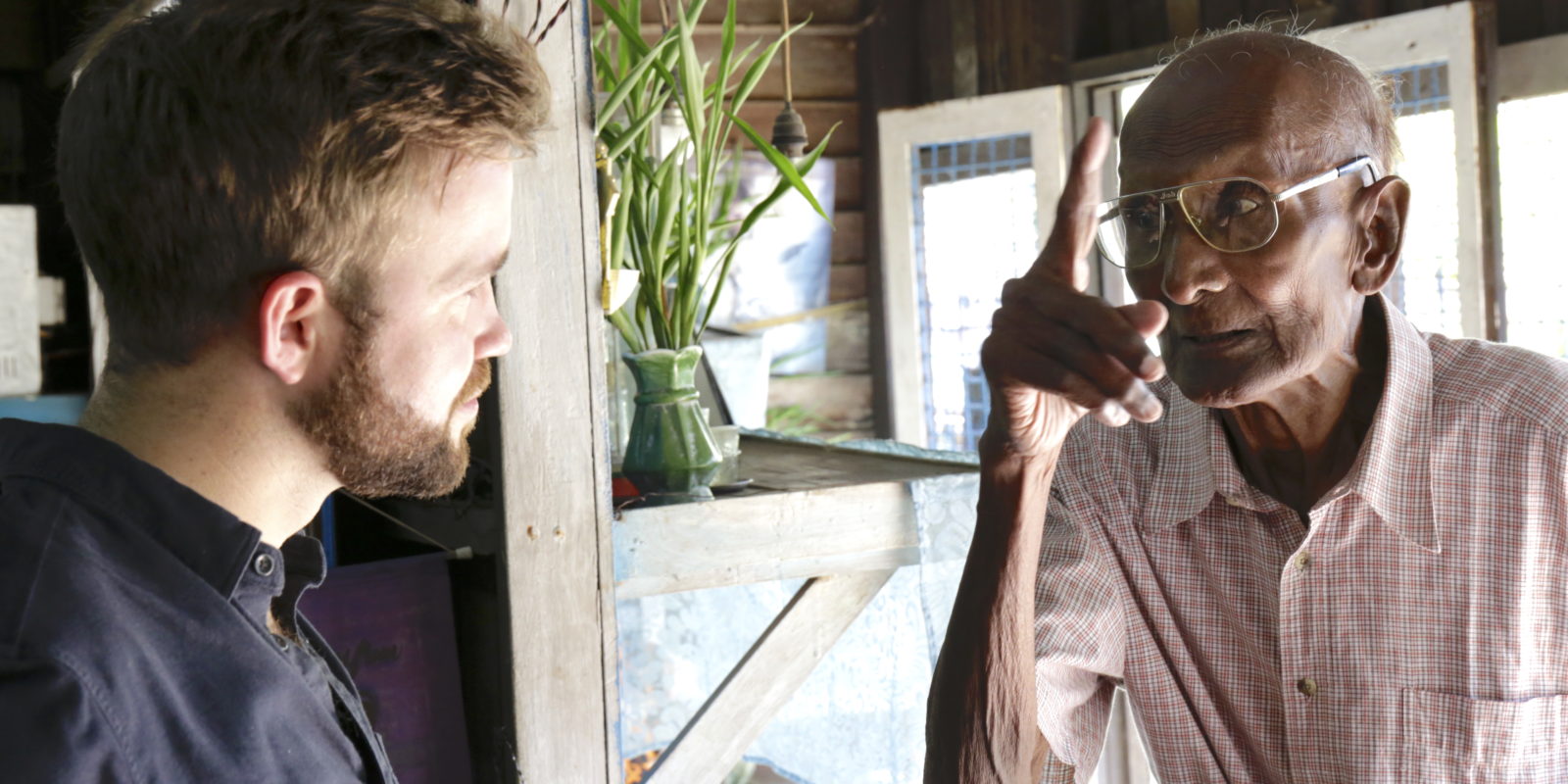 Luke Radcliff, researcher at Grammar Productions, introduces David Daniel, a veteran of Anglo-Burmese descent who fought alongside the British during the Second World War.

In a modest bungalow in the suburbs of Yangon, Myanmar, littered with framed pictures of King George VI and Queen Elizabeth II, posters of General Slim, Union Jack flags and worn paper poppies, lives David Daniel – one of the proudest surviving veterans of the WW2 Burma Campaign we came across during our Forgotten Allies shoot.

Daniel, 93, of Anglo-Burmese descent, retains vivid – and traumatic – memories of the events of 1941-45 in his country.

Like many we met in Myanmar, Daniel’s family history weaves a fascinating thread through the many twists and turns of this country’s recent past, and Myanmar and Britain’s lesser known shared history. Tracing it back you begin to unravel the incredible story of a country that’s been forged by a near constant clashing of civilizations and empires – including Britain’s.

Daniel’s grandfather, a soldier from London, arrived in Burma at the end of the 19th Century during the Third Anglo-Burmese War. That conflict ended in November 1885 when King Thibaw was ejected from the throne and the British finally annexed Upper Burma into British India (a story told in our earlier film, We Were Kings).

For Daniel though, it’s a slightly more benign moment on his family tree: “He married a maid of honour, from the palace. She was Burmese,” he explains.

Later, Daniel’s father Reginald served with the British during the First World War. He was sent to Palestine and returned with Ottoman Turk prisoners of war who were to be interned near Maymyo (now Pyin Oo Lwin, near Mandalay). Here they carved out the town’s Kandawgyi Lake by hand.

In 1941, against the wishes of his father, Daniel became third in a line of soldiers by joining the “Royal Artillery” aged just 17. He was to receive a shocking introduction to a soldier’s life; within months the battle-hardened Japanese Army had begun their seemingly unstoppable attack on Burma.

Almost immediately, Rangoon came under heavy aerial bombardment. “It was the first time [I’d seen it]. Not even a dead body… Just pieces,” he says.

As the Japanese made light work of colonial Burma’s woefully inadequate defences, the Army were forced to begin what was to become the longest retreat in British military history. Daniel and his unit set out north for India but became blocked and surrounded just 21 miles out of Rangoon at Taukkyan (Htauk Kyant) by the heavily armed Japanese 33rd Division. “There were Japanese snipers in the trees,” he shudders, “it was terrible”.

Grammar Productions in the field

After a fearful day, the route was finally cleared and Daniel and the rest of the Army – followed by around one million civilians – were able to progress out of the city. Ahead of them however, lay a gruelling 720-mile trek, through dense malarial jungles and over jagged mountains. To make matters worse, they were racing to beat the monsoon rains, and were being chased every step of the way by a Japanese Army flush with success. Few would make it to India alive. Daniel was one of the lucky ones. Finally reaching India, he collapsed, afflicted by malaria and dysentery, but fortunate to have escaped with his life unlike many of his comrades and a huge number of civilians. After treatment he and thousands of others were trained to form General Slim’s new, reorganised fighting force – the Fourteenth Army.

Over two years later, after an unsuccessful attempt by the Japanese Army to invade India, this completely restructured, resupplied, and reinforced army, driven forward by a vast mechanised column, would return to Burma. After fierce fighting they would eventually retake Rangoon, driving the remaining Japanese soldiers out of the country.

Britain’s war in Burma was over, and soon enough they would clean their hands of its troublesome history, returning to rebuild their own war-shattered nation. But the memories of these battles continue to haunt Daniel today.

“I see the fighting… the enemy around the walls… I still get the nightmares… I get startled… Even now sometimes I shout in my sleep.”

And much like David’s nightmares, the legacy of the war would continue to rumble on in Burma for decades to come, and in ways few could have predicted.

Sampan Travel is proud to have acted as the logistical partner in Myanmar to Grammar Productions for their film Forgotten Allies.