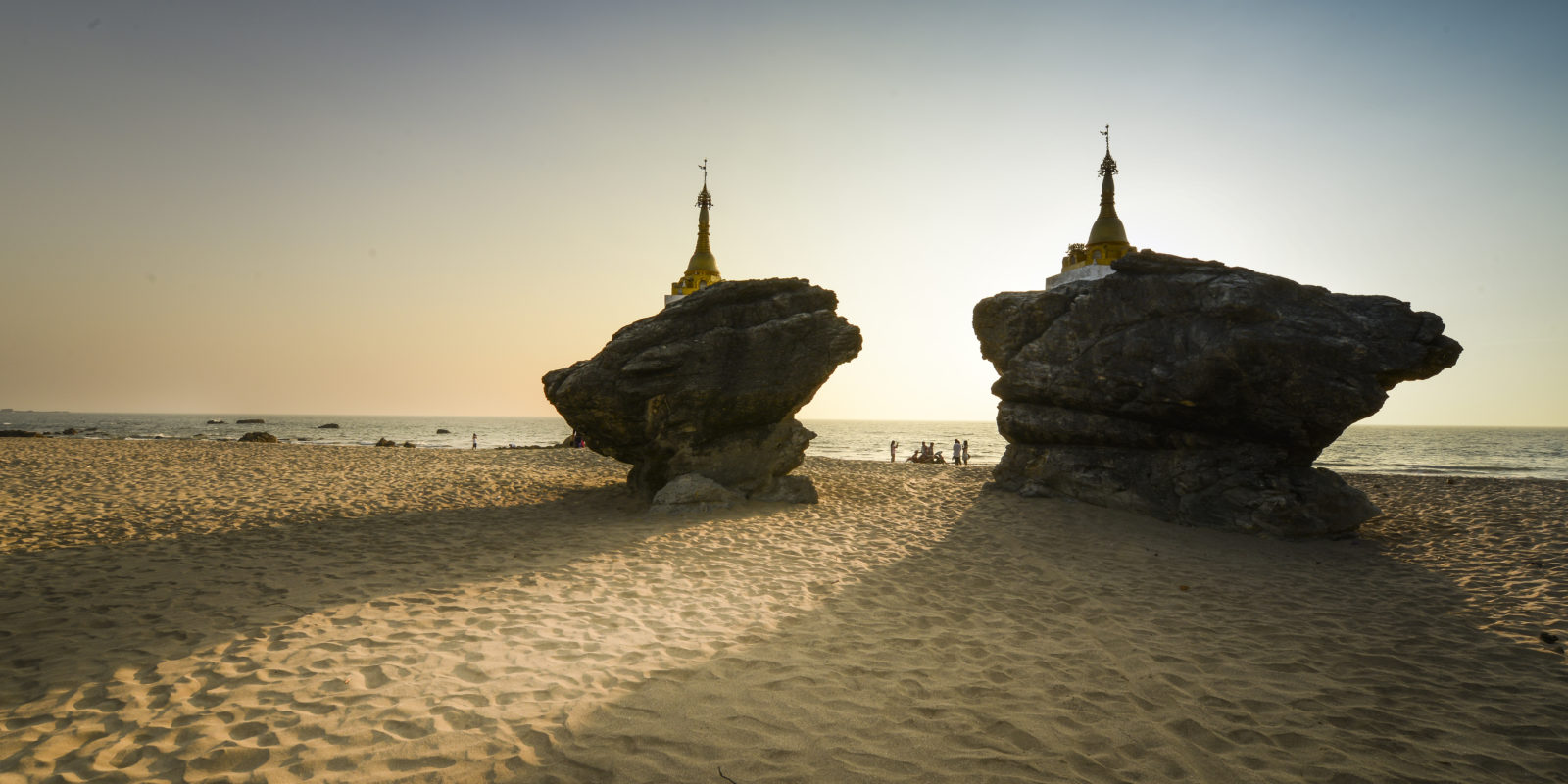 In Danny Boyle’s film The Beach, the protagonist played by Leonardo DiCaprio finds in a Thai hotel room a map purporting to show the location of a paradisiacal beach. On this beach there are no bars and no backpackers. It is a place where he could potentially find the mythological beauty of the Orient and perhaps find himself too …

The movie was shot not far from Koh Phi Phi in Thailand. In scenes that would surely make Richard rage, today ‘The Beach beach’ sees boatloads of tourists arriving on the hour every hour, boozing, bathing, and playing Aussie Rules on the sand.

Today there are few peaceful coves on the islands of Thailand and for a while now the infamous Koh Samui and Koh Phangan have been straining under the pressure of mass tourism.

Up the coast in Myanmar is the Mergui Archipelago where there are over 3000 islands, often deserted, mostly small and many offering small bays where only the odd fisherman or monkey disturbs the pristine white sand.

Sampan are confidently naming these the best beaches in Myanmar. And yet permit restrictions and the prices of boarding a boat out to the Archipelago render these beaches inaccessible to most travellers to Myanmar. One doubts that even the tenacious Richard would have made it past the mangrove forests off the coastal town of Myeik.

However this should not deter sun-junkies as there are still fantastic beaches in Myanmar that are more accessible than Mergui and more worthwhile than Phi Phi in Thailand.

Ngapali has long been considered the finest location for those seeking a Myanmar vacation in the sun. Ngapali’s name is said to be a derivative of ‘Naples’, having apparently reminded early European merchants of the Italian City. Whatever Napoli was once like, we would confidently say that Myanmar’s version offers the better beach holiday today.

Ngapali has white sand and palm trees agogo, as well as a wide and glittering array of hotels and resorts. There is a top selection of spots to eat spicey Rakhine seafood and each evening outside of the monsoon season one can enjoy spectacular sunsets over the Bay of Bengal. Although possible to reach by land, this is an arduous route from whichever direction you attempt to come. Most travellers reach Ngapali Beach by flying to the nearby town of Thandwe from Yangon, Nyaung U (Bagan) or Heho (Inle Lake.)

The two challenges facing Ngapali today are hotel expansion and the disposal of rubbish.

The Myanmar Ministry of Hotels and Tourism (MoHT) is currently toying with the idea of whether or not to restrict the opening of new hotels so as to preserve the charm that Ngapali still possesses. The flouting of the height restriction by some new hotels has raised hackles and the issue is now coming to a head as to whether the hotel zone at Ngapali should develop horizontally or vertically.

As Myanmar’s flagship beach, Ngapali benefits from the hand-wringing concern of both MoHT and tour operators. A couple of months ago the Minister for Hotels and Tourism visited Ngapali to attend a forum to discuss, amongst other things, the expansion of Thandwe Airport. Repulsed by the litter he saw, the honourable U Ohn Maung declared that no airport would be considered until the people of Ngapali ‘slash the trash’.

Hard-hitting words. But if taken seriously, it is likely that Ngapali will keep hold of its position as Myanmar’s No. 1 destination for a Burma beach holiday and see off the rivalry emerging to the south …

While Ngapali has so far absorbed the lion’s share of sun-seekers in Rakhine State, the southern township of Gwa looks soon to challenge its more established sister to the north. Indeed, in the shadowy corners of tourism functions in Nay Pyi Daw and Yangon, Gwa is being furtively whispered as the next big thing in Myanmar …

Driving by car from Yangon it will take around 6 hours to reach Gwa. However the road twists and turns relentlessly and can become unsafe to travel during the monsoon season. A better option is to fly to Thandwe and then drive three hours down the coastal road from Ngapali.

The town of Gwa is a fishing hub and so like many of Burma’s beaches the bay at Gwa is interesting to see but not suitable for sunbathing or swimming. Just to the north however is Zee Khone Village. Here, currently under construction, is Arakan Nature Lodge, a sustainable hotel made up of ten delectable bungalows projected to be open in October 2017.

Thirty minutes drive away is Kanthayar Beach in Satthwa Village. Here there are no hotels, very few tourists and one can enjoy an undisturbed afternoon on the sand.

Continuing north just five minutes by car and you will reach Zee Kone Beach (not to be confused with Zee Khone Village to the south) where the teak wood bungalows of Yaewaddy are currently the best option for travellers in Gwa.

Eco-tourists can visit the wildlife sanctuary operated by the Italian NGO OIKOS at Kyeintali. Look out for the Arakan Mountain Turtles as well as a broad array of indigenous birds. One can also take boat rides along Kyeintali Creek and explore the mangrove forest at the mouth of the river.

Poor road conditions, indeed poor infrastructure in general, and a meagre selection of accommodation have long made this part of the country difficult to reach. However Tanintharyi Region is finally seeing an increased footfall of foreigners. Roads have improved at a rapid pace since the new government came to power in 2016, allowing those who do not wish to take a plane, to catch a bus or take a car from Yangon or perhaps Kayin or Mon States.

Backpackers, so often the pioneers of the tourism world, searching for the best beaches in Burma have begun arriving at the elusive Dawei Peninsula in the north of Tanintharyi. Many of these travellers have come from Thailand to the east and south, either over the border at Kawthaung at the bottom-most tip of Myanmar, or at the town of Htee Kee further north.

Much like Richard in The Beach, when Sampan was recently kicking back at the new Paradise Beach Bungalows on the Dawei Peninsula, nomadic travellers of all ages would turn up unannounced having heard stories in Thailand of a mythical paradisiacal cove in Southern Burma. With a lack of bed space the slightly harassed manager attempted to turn away the pilgrims. However they could not be deterred and soon staff were nipping about the bungalows creating hammock space.

There is a decidedly backpacker feel at Paradise Beach. Throughout the day guests lounge about playing cards and drinking coconut juice straight from the fruit. One evening a week a communal supper is held for all guests and staff and at night a large bonfire is lit and acoustic guitars are brought out.

One can only reach the cove (real name ‘Zar Saw Aw’) by walking or taking a motorbike along a steep jungle path. There is no WiFi or phone signal. One is left to the gentle waves of the sea and the beach, which is almost pristine save for the strewn accoutrements of the fishermen who emerge at dusk to catch squid.

To the truly intrepid, Paradise Beach may already be too commercialised. If so, take a motorbike and ride down the peninsula yourself, along sandy paths and past chaotic but charming fishing villages. Just be sure to be back before nightfall! Free camping is severely frowned upon.

Ngwe Saung Beach, a 5-6 hour drive west of Yangon, has long been a favourite destination for expats wanting to escape the city. It’s scruffy brother Chaungtha up the coast offers a more local experience, but the amount of litter on the beach spoils what is otherwise a jolly and raucous visit.

From Yangon, Ngwe Saung can actually take longer to get to than Ngapali, meaning that many of those looking for a Myanmar beach holiday opt for Rakhine State and ‘Burma’s Silver Coast’ is forgotten. This is all the better for those that do choose to visit Ngwe Saung, allowing them to soak up what is a more laid-back and informal atmosphere to Ngapali. There are still luxury, top-quality hotels here, but they are in general cheaper than those in Rakhine State and there is accommodation for budget travellers and backpackers on a shoestring.

Ngwe Saung offers fire-shows, motor-bike rental and at sunset the young men who work in the hotels come out to play football and chinlone, politely consenting to the inclusion of less nimble travellers. The waves are bigger and rougher than those at Ngapali, making it an altogether more thrilling experience to go bathing at Ngwe Saung; surfing and other water sports can easily be arranged.

Travel to the Ayeyarwady Delta

Like most of the best places in Myanmar, Gaw Yan Gyi is an effort to get to. There are two main ways, either motorbiking down from Ngwe Saung or taking the cramped Yangon coach for 10 hours along a twisting road down into the Delta. The journey is worth it however. Gaw Yan Gyi has been a quiet favourite amongst Myanmar people for a couple of years now, but only recently has it been frequented by foreigners.

Although it is often referred to as an island, Gaw Yan Gyi is actually a peninsula at the south of Ayeyarwaddy Region. The simple but comfortable bungalows of G7 Plage are the best accommodation on offer. The G7 restaurant is fantastic, featuring crab, scallops and lobster which will be fished out of the sea for you on request.

Both sides of the peninsula are beach. One is the fishing bay, the other the ‘pleasure beach’. The latter is almost always quiet save for when children from the village run and leap into the water to cool off between lessons. Bits of fishing apparatus are peppered over the beach, but this is to be expected, as Gaw Yan Gyi still does not regard itself as a tourist destination and therefore picking up bits of netting is simply not a priority.

And indeed, it is the real, rustic, raw nature of Gaw Yan Gyi that makes it so special. Travellers are able to enjoy both the comfort of G7 and the beach while at the same time nip into the village.  Unlike Thandwe or Ywama in Ngwe Saung, Gaw Yan Gyi has not adapted its catering for the benefit of travellers by selling pizza and pasta, but instead is made up of tea shops, beer stations and little restaurants. The merry proprietors – as is the way in Myanmar – will wave you in from the street to try their tea-leaf salad before going for a bathe.

Indeed, Gaw Yan Gyi does not offer the isolated paradise of Richard’s island, but instead the comfort of a pretty beach and the charm and hospitality of a Burmese village.

Travel to the Ayeyarwady Delta