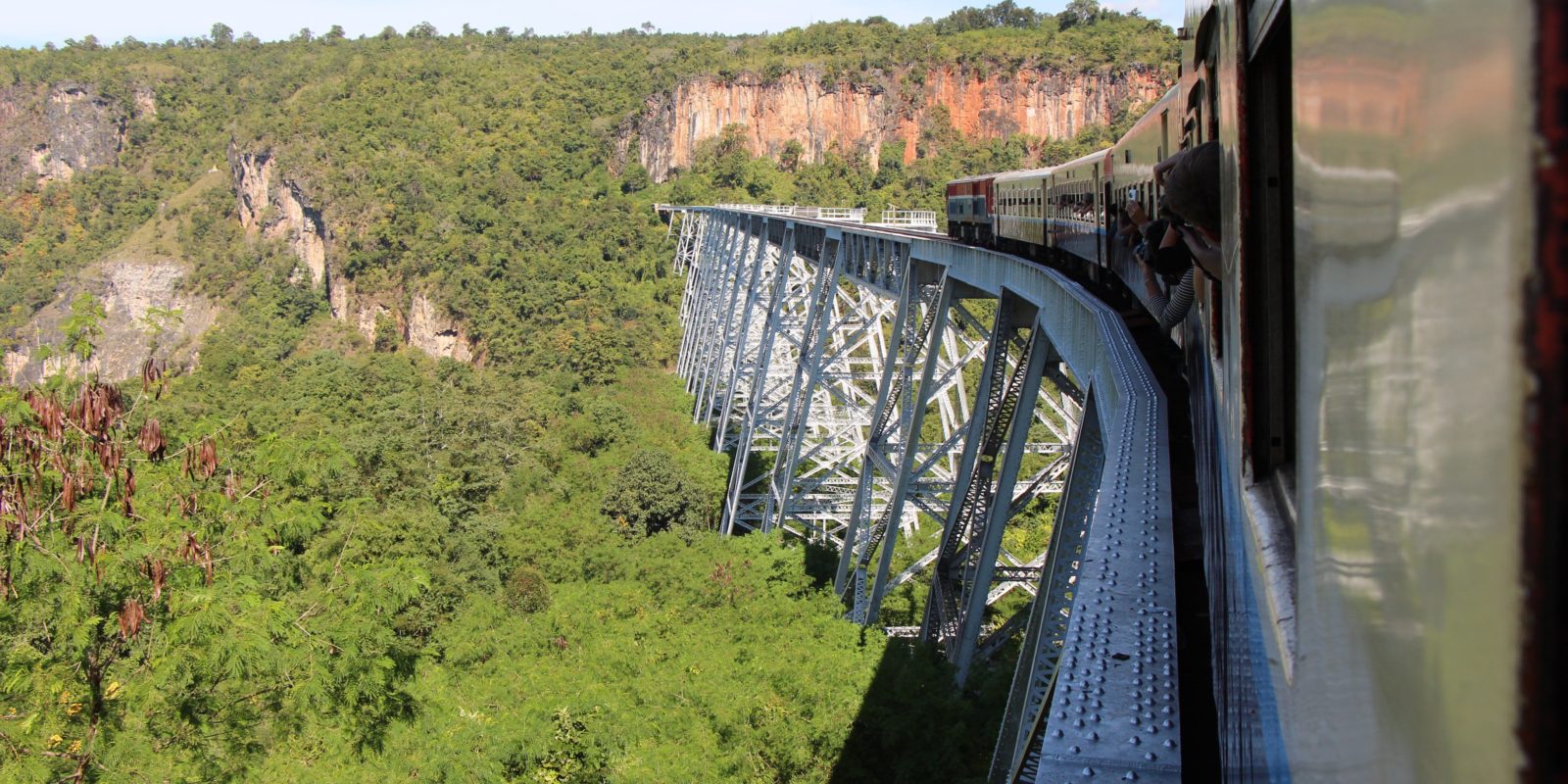 ‘I have seldom heard a train go by and not wished I was on it.’

So wrote Paul Theroux, a wandering scribbler who perhaps more than any of his contemporaries personifies the curious, intrepid and relentlessly observant breed of travel writer to whom Myanmar has so much to offer.

Train travel through Asia presents experiences – sights, smells, stunning scenic landscape – as impressive as in any other destination in the world. In Myanmar, the decrepit tracks make for a bumpy ride, however the venturous routes and antiquated carriages more than make up for any discomfort.

The Train to Hsipaw over the Gokteik Viaduct

In his book The Great Railway Bazaar, Theroux travels by rail from London through Europe and Asia. He delves into Myanmar purely to take the Lashio Mail over the Gokteik viaduct in Myanmar’s Shan State.

Theroux boarded the train to Hsipaw at Pyin Oo Lwin, formerly Maymyo, Burma’s most genteel British Hill Station. During the high season the train station buzzes with a small crowd of eager tourists in the morning awaiting the 08:22 train to Hsipaw or Lashio. At the front of the snaking queue there is a desk at which are sat two immigration officers lackadaisically copying passport and visa details into numerous slips of paper.

Passengers have the choice of opting for upper or lower class. There are no seat reservations in the latter so those who go for the more rugged experience will have to vie for a place on the wooden benches amongst a throng of locals. For 30 American cents more travellers can take a cushioned seat in upper class, where you will find as many Burmese and Shan out on a day trip from Mandalay as you will prim tourists. Travelling at no great speed, the habitual bumps and jolts render the cushioned seat in upper class all the more worthwhile and the branches that on occasion whip into the compartment through the window add a spice of adventure to each attempted photograph.

… there may well be a jocular family or two from Mandalay on a day-trip, chirruping to everyone amicably while their lunch of curry and rice decanted into clear plastic bags swings precariously from the luggage racks overhead.

From Pyin Oo Lwin the train takes three hours to reach the Gokteik Viaduct. The viaduct was commissioned by the British and built in 1899 by the Pennsylvania Steel Company. At just under 100 metres high, the viaduct was the second-highest bridge in the world at the time of its construction. Initially, it was intended to be a vital link in an almost unbroken chain of British rail lines stretching from the northeastern corner of India up to the border of China. Today, it is more a tourist attraction than anything else.

The congenial atmosphere in the train carriages allows for the opportunity to converse with fellow visitors to Myanmar; swapping tips and sharing travel experiences. The history of the line and the Gokteik Bridge will be related over the course of the journey from the mouths of half a dozen guides in a handful of languages, while in the corner sits a lone, intrepid backpacker attempting to practice his Burmese with anyone who will listen. Germans settled in the best seats will surreptitiously compare each others’ guide books and there may well be a jocular family or two from Mandalay on a day-trip, chirruping to everyone amicably while their lunch of curry and rice decanted into clear plastic bags swings precariously from the luggage racks overhead.

At most stations along the route hawkers will tumble onto the train laden head to foot with refreshments: baskets on their heads, packages tucked into the pit of their arms and bursting bags dangling from their chest and waist. Water, soda and beer will all be on offer, as will nuts, crisps, fried snacks, pork rind, and quail eggs.

After Burmese independence, with the assassination of national hero General Aung San, insurgency raged throughout Shan State. The few foreigners that ventured into Burma were blocked from passing beyond Pyin Oo Lwin. Many outside the country doubted that the viaduct would survive the habitual skirmishes between the communists insurgents, the ethnic Shan armies, local drug lords and the Burmese national army, the Tatmadaw.

Travelling in the ‘70s, Theroux managed to convince the personnel at Pyin Oo Lwin station to allow him to board the train. He was escorted into the last car along with the troops who were placed upon every train so to guard against ‘dacoits’ or bandits. Theroux depicts the soldiers in ‘dented helmets and hand-me-down uniforms’ conjuring a ‘grizzled, courageous look you see in embattled legionnaires.’

Positioned squarely between a Security Officer and the four soldiers, Theroux describes the approach to the Gokteik Bridge thus:

The viaduct, a monster of silver geometry in all the ragged rock and jungle, came into view and then slipped behind an outcrop of rock. It appeared again at intervals, growing larger, less silver, more imposing. Its presence there was bizarre, this manmade thing in so remote a place, competing with the grandeur of the enormous gorge and yet seeming more grand than its surroundings, which were hardly negligible – the water rushing through the swirling clouds and the blackness of the tunnels beyond the viaduct.

The train crawls over the 689 long metre bridge at a reassuringly slow pace, giving passengers the chance to dart from side to side of the carriage in the pursuit of photos free of the arms and selfie sticks that protrude out of windows.

Below in the tangled bowels of the gorge one can spot a second railway line that was built as an emergency back up in the 1970s. It was never used however and in 2002 it was left to the mercy of the triffid-esque foliage that rears up from the depths.

In 2015 walking over the viaduct was henceforth prohibited, however it is likely that you will pass one nonchalant and rebellious daredevil perched atop a trestle bent, lips pursed down upon a cheroot and feet dangling 100 metres high over the gaping gorge.

Many of the locals out simply for a day-trip will depart directly after Gokteik at the station Naung-Peng to return back to Pyin Oo Lwin or Mandalay. Foreigners may jump out here too and continue their journey east by car along the Burma Road.

With more than half the passengers departed and the excitement of passing over the gorge subsided, a contemplative tranquility will likely arise within the thinned out carriage. The train will now pass through some of the finest landscape that Shan State has to offer; languorous rivers curtailing rich paddy fields; stately homes of the extinct sabwa gentry; red brick churches watched over by the twinkling pagodas on the cusp of hills.

Roughly two and a half hours from the Gokteik Viaduct the train will reach the town of Kyaukme. Here the ambitious – most likely the lone backpacker and his Burmese phrasebook – may disembark and attempt to hike east following the train to Hsipaw. Off he pops with a cheery twe meh naw! to the last of the either nonplussed or uninterested foreigners and passing him on the station are young and bright locals, promptly seating themselves next to tourists and attempting to engage them in conversation with faltering but adamant questions. Your nationality, impressions of Myanmar, and length of vacation will all be briskly enquired of and approved with a ‘yes yes very good’, followed by a small pregnant pause before a garish flyer is produced and you are introduced to the cleanest and cheapest hotel in Hsipaw.

…anything is possible on a train: a great meal, a binge, a visit from card players, an intrigue, a good night’s sleep and strangers’ monologues framed like Russian short stories …

The train will almost empty at Hsipaw. Who would continue onto the gaudy town of Lashio when the hills and monasteries of the last Shan princeton beckon? And yet, although Hsipaw is delightful, perhaps on the carriage a shadow of Theroux lingers. A shadow still aggrieved at being sent directly back to Maymyo after crossing Gokteik and still believes that the longer the train journey, the better the journey …

Continuing on from Hsipaw through Lashio, ardent ferroequinologists and those with a love for romantic if rustic travel can follow the Burma Road up to Muse and along with the battalions of trucks that trawl this route – over 350 trucks carrying sugar each day alone! – pass over the border into the Land of the Red Dragon itself, sticking with the rails in pursuit of the Eastern Star.

Train travel through Myanmar does not yet have the luxury found in Europe, the stimulation in India nor the exhilaration in Japan. Yet despite it’s lopsided sleepers and long drops, it still exudes an ephemeral and romantic allure. Down to the southernmost point of Myanmar at Kawthaung, or up to the far north of Kachin State, train travel in this country is seeing a welcome renaissance.

As Theroux writes, luxurious or not:

“…anything is possible on a train: a great meal, a binge, a visit from card players, an intrigue, a good night’s sleep and strangers’ monologues framed like Russian short stories …”